Rethinking Property in the Digital Era 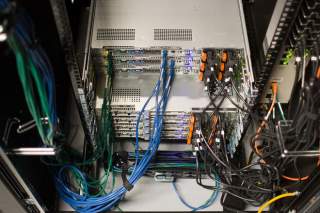 In the seventeenth century, political philosopher James Harrington noted that the determining element of power in preindustrial England was the ownership of land. James Madison, arguably the father of the U.S. Constitution and an admirer of Harrington, later summed up his views in an aphorism—“power follows property.”

‘Data’ has emerged as the twenty-first century ‘land’, the new form of power. Big data, and in particular, personal big data—the zeros and ones, that, when combined, can reveal unique information about individuals—has already begun to demonstrate its transformative potential. As data begins to reveal more about individuals, its value and impact on those individuals will increase. Conceptions of property must expand from the physical to the virtual to meet twenty-first century realities. Data should be viewed as a form of property.

The Ramifications of Personal Big Data

Global digital data is doubling yearly, and individual consumers create the majority of that data, producing, in essence, digital footprints. These individual consumer digital footprints—downloads, e-mails, ‘likes’, cell-phone location readings, clicks, and purchases—are just the beginning. People are becoming increasingly socialized into sharing more personal information. The Quantified Self movement aims to measure all aspects of our lives with technology, and the new wave of wristbands, like Sony’s SmartBand, are increasingly helping to facilitate that. On their own, personalized bits of data are not particularly useful, and only appear to provide relatively esoteric indicators of a particular individual. Big data, however, by fusing flows of information with insights derived from behavioral science, now allows advertisers, search engines, and social media platforms to try and predict and model human behavior.

While our personalized big data can help facilitate healthier living, smarter cities, and increasing web simplification through personalization, there is also a darker underbelly to the accumulation of this information. In a recently released report by the World Privacy Forum, Pam Dixon and Robert Gellman note that data brokers, analytical firms, and retailers, are using personal data to create hundreds of inaccessible consumer scores, ranking individuals on the basis of their perceived health risk, likelihood they will keep their job, and their supposed propensity to commit fraud. Perhaps more importantly, last week the Obama administration released the findings of their ‘Big data and Privacy working group,’ noting that big data analytics can “lead to discriminatory outcomes and circumvent longstanding civil rights protections in housing, employment, credit, and the consumer marketplace.” These secret consumer scores and profiles can cast an indelible stain on individuals, and have the potential to become sources of classification, profiling, and discrimination.

For example, in 2011, Google explained how consumers with ‘high-value profiles’ received higher bids for corporate access to advertise to their profiles. Meanwhile, consumers with ‘low-value profiles,’ often received no bids at all. Jeff Rosen of George Washington Law warns that this will essentially eliminate a free and open marketplace; as consumers will no longer ‘haggle’ with sellers on equal terms, while being unaware of what discounts and prices other preselected individuals are being offered. Even more problematic is the fact that these consumer scores could affect an individual’s eligibility for a new job, a loan, credit, or affordable insurance. In short, one could see the emergence of a class of ‘digitally disenfranchised’ individuals, whose prospects and ambitions are limited or denied due to the existence of ‘digital scarlet letters’.

Perhaps more troubling than the profiling itself, is that these profiles are often wrong. Last month, the Economist ran a blog on the increasing backlash against big data, noting three mainstream criticisms of big data. While big data criticism is not an attack on the data itself, it is a critique on the numerous perceived deficiencies of data analytics. Data analysis can come to erroneous conclusions and correlations. In a recent conversation with an insider from a data aggregation and profiling site, the person revealed that the company’s labeling is correct only 40 percent of time. While an accuracy rate of only 40 percent may not seem like a big deal when Amazon is using individual data to tailor-make book recommendations; a 60 percent error rate looks a whole lot more disturbing when that same data is then used to determine job eligibility and proclivity to commit crime. A false profile may indeed become an ‘invisible brand,’ which cannot be erased. And unlike those tattoos that people immediately come to regret after a revelry-filled evening, in this case, a person may not even know he or she has been branded.

Preventing inaccessible data profiling requires enlarging our definition of property from the physical to the virtual.

As Harrington noted in The Commonwealth of Oceana, domestic empire is always founded on dominion, and dominion is property, composed of land, money, and goods. In Oliver Cromwell’s England, and under those who ruled before him, power was a facet of land. ‘Data’ is increasingly becoming the equivalent of ‘land’ in seventeenth century England. For those few corporations and governments that aggregate data, they accrue enormous amounts of power. Data, similarly to land, should be considered a property that individuals have the right to save, sell, or trade.

In February 2014, the Canadian Daily Mail ran a commentary on personal data and potential individual profit. The article noted that according to a Microsoft Survey, 45 percent of Canadians would be interested in selling their data for rewards. Websites are now emerging to facilitate just that. Datacoup is a New York startup that is willing to pay consumers for access to their social media networks and credit card statements. Datacoup CEO stated, “data brokers are finding all these diamonds and reaping all the benefits.” Isn’t it time individuals reaped the benefits of their own information? And for those individuals who would not want to sell their data, some are advocating individualized ‘privacy vaults’ in the cloud. Ontario’s Information and Privacy Commissioner Ann Cavoukian mentioned this would allow individuals to control who has access to their data and how it is used, which would help eliminate inaccessible and faulty profiling.

However, our founding fathers’ conceptions of property extended beyond the physical, past Harrington’s conception of ‘land’. The political philosopher, John Locke, also greatly influenced Madison’s thoughts on property. Locke perceived of property as an essential facet of man’s pursuit of happiness. Locke’s conception of property extended beyond the possession of material items and addressed the immaterial. As Madison epitomized, “everything to which a man may attach a value and have a right.”

In Locke’s Second Treatise of Government, he explained that property was not simply the ownership of things; it was the right to rights. Locke used property to denote everything that belonged to an individual, including their rights. Our founding fathers shared this vision of property.

The use of individual data for profiling removes the Lockean right to rights, a man’s right to free communication, free opinions, free choice, equal justice, and equality of rights. Should government or corporations use personal big data to create virtual profiles on individuals, and then subsequently treat individuals differently due to those profiles, then the people have lost their ‘right to rights.’

Data is a virtual reflection of our conscience—a winding, imperfect trail of our likes, dislikes, interests, hobbies, and ideas. And as James Madison once said, “conscience is the most sacred of all property.” Therefore, data should be viewed as property.

Jennifer McArdle is a Research Associate at the Potomac Institute for Policy Studies and a Fellow in the Center for Revolutionary Scientific Thought.