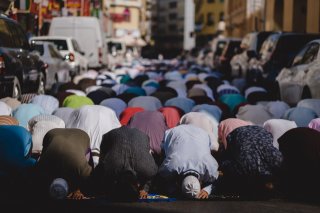 THE ADVANCE of U.S. interests from North Africa to Central Asia is foundering. The exhausting occupations of Iraq and Afghanistan portend strategic failure. Large swaths of an Arab world the U.S. dominated thirty years ago as it led to the expulsion of Saddam Hussein’s forces from Kuwait and hosted an Arab-Israeli peace conference roil in various states of political fragmentation and economic ruin. A U.S. military foothold in Syria is ensnared in a mesh of regional and Russian forces. Missile and drone attacks against Saudi Arabia are able to disrupt global energy supplies. A U.S. military support role for Saudi Arabia’s campaign in Yemen has served primarily to deepen perhaps the largest humanitarian crisis in the world.

Chinese and Russian influence is broadly ascendant, a new “Great Game” in Afghanistan risks accelerating after the U.S. withdrawal, and Al Qaeda and ISIS—despite years of unrelenting and often successful U.S. pressure—continue to plot and inspire attacks against American interests globally. Regional states—including presumed U.S. allies—increasingly act with neither fear of nor deference to Washington. An erratic multi-year effort aimed at curtailing Iranian nuclear ambitions rests on a knife’s edge of failure. The massive expenditures of blood, treasure, and diplomatic capital across the wider Middle East that have produced these outcomes since the end of the Cold War amount to a debacle for U.S. strategy across a pivotal part of the globe.

This litany of failures has spurred American strategic thinkers and former policymakers to advocate a new strategy of retrenchment. A consensus has emerged that the United States has been overcommitted to a region whose internal challenges are beyond the reach of U.S. instruments of power. Essays such as “The Middle East Isn’t Worth It Anymore,” “The Middle East Just Doesn’t Matter as Much Any Longer,” and “America’s Middle East Purgatory” are giving voice to an exasperated foreign policy elite eager to pivot U.S. strategy to more immediate threats from Russia and China. Similarly, a bipartisan consensus for the withdrawal of U.S. forces from Afghanistan had been building for several years.

Such frustration is understandable given the memory of the United States successfully securing many of its interests in the wider Middle East throughout the Cold War. When an earlier retrenching Western power, the British, passed to the United States a roiling stew of nationalism, traditional monarchies, and scattered energy interests in the wider Middle East, Washington—with the major exception of the Iranian revolution—largely met the challenge.

The United States achieved its regional objectives by engaging local elites politically and economically, marshaling diplomatic leverage, and arraying offshore naval power. Arab-Israeli wars were contained and redirected into a semi-permanent peace process, Egypt switched from the Soviet to the U.S. sphere of influence, damaging oil embargoes were overcome, and a U.S.-backed Islamic insurgency—the Mujaheddin—successfully countered the 1979 Soviet invasion of Afghanistan. U.S. ground forces deployed once to the region—in Lebanon in 1958—to welcoming Lebanese on Beirut’s beaches. The post-Cold War era, in contrast, is proving far less responsive to U.S. power.

Calls for retrenchment are coming with a paradoxically long list of enduring U.S. interests to protect. The incoming national security advisor in January 2021, for example, sketched the inherent challenges of retrenchment: “Downsizing the U.S. presence in the Middle East will require striking a tricky balance: reducing an outdated U.S. military footprint without creating fresh insecurity, while maintaining deterrence and influence where needed to address those key U.S. interests that remain.” Other experts have been more detailed: “the U.S. has three truly vital interests in the region: limiting terrorism, protecting the flow of oil and preventing Iran from acquiring a nuclear weapon.” Similarly, others have asserted that,

The United States should still care about protecting freedom of navigation in the region’s major maritime passages, preventing oil producers or trouble makers from suddenly turning off the flow, and containing would-be regional hegemons and other actors hostile to Washington.

In Afghanistan, the United States has pledged to maintain counterterrorism and humanitarian operations but will need a foothold in neighboring Central Asian states to achieve these post-withdrawal aims.

A new U.S. strategy that might secure this long list of vital interests has yet to be articulated. Instead, the orthodox Cold War discourse of classical realism lurks in the background with an emphasis on power, interests, and the state. A typical view is that America “still has interests (in the Middle East) to protect but America needs to be realistic, prudent, and disciplined in how it secures them.” A foreign policy elite that came of age in the Cold War is reluctant to revisit basic assumptions about how the United States acts toward the wider Middle East.

This bias toward realism is understandable. It sits well with a national security establishment originally organized around the Cold War mission of containing Soviet power and winning an ideological confrontation over secular forms of governance. Realism is also compatible with foreign policy elites habituated to decades of dealing with counterpart palace elites to advance U.S. interests in the wider Middle East. These palace elites buffered the United States from direct engagement with mass movements and the labyrinthine fissures of societies ruled by authoritarian regimes. Interests, once defined, were delegated and managed by such proxies.

The development of a new U.S. strategy predicated on “interests” decoupled from the increasingly complex and volatile contexts in which such “interests” exist, however, risks failure from the start. The continued reliance on a mostly realist and state-centered framework can mask that many states in the wider Middle East barely function and often do so with only de jure borders. Realism also skirts how religious and other sub-state actors are claiming roles in governance amid the ruins of formerly secular nationalist states. Historic memory and national myths are also increasingly part of political identities and strategic ambitions which a U.S. strategy based on realism alone can easily dismiss.

A reckoning with past U.S. assumptions is the sine qua non for the development of a new regional strategy. The scope of strategic failures over the past two decades alone suggests a re-examination of the most basic assumptions of U.S. strategy in the wider Middle East is necessary. Growing challenges to governance, changes to the regional state system, diminished U.S. energy dependence, and the disruptions of an information and communications technology revolution make retention of unexamined assumptions about state, society, governance, and U.S. regional leverage still less plausible.

A new strategy begins with an expansion of our analytic tool kit. New frameworks for understanding the inter-connected geographic space of a wider Middle East and the power of myth and historic memory to shape the strategic intent of actors are needed to inform a new U.S. strategy. Similarly, we need ways to understand the diffusion of political and cultural movements across borders, patterns of religious governance, and the interactions among Islamic and neighboring civilizations to help America define its interests and pursue them more effectively. To think beyond the state, beyond the assumption of secular governance, and beyond fixed ideas of Western modernity offers the promise of a more effective U.S. strategy.

THE PRIMACY of the state in U.S. strategic thinking has persisted since the surge in new state formation following the twentieth-century demise of empires. Despite the increasing power of substate actors and globalization’s undermining of states’ sovereignty, states still matter most to U.S. foreign policy. The threats of state actors such as China and Russia command the attention of foreign policy and national security elites and the U.S. response to global challenges from pandemics to climate change to international corporate tax structures remains state-centered. The state as the conceptual foundation of global politics and security also endures in the way U.S. national security and diplomacy are primarily organized.

This state-centered approach to U.S. strategy has had important consequences for the way the United States has conceptualized the wider Middle East. The state—controlled by palace elites—has been understood as distinct from the societies governed. As Ewan Stein has observed, the state has been “regarded self-evidently as the repository of modern Westphalian norms and society as a separate realm containing premodern identity.” In such a framework, states became the engine powering the modernization of a region, transforming “traditional” societies in conformity with the requirements of a scientific and technological revolution. The Cold War’s protagonists differed over the means to achieve such modernization, but both aimed at it with their competing regional strategies.

Such a distinction between the modernizing state and traditional society has also shaped the way history has been incorporated—or ignored—in U.S. strategic thinking about the region. A privileging of modernization over traditional society has devalued the long history of the region—including its ancient civilizations—that influences states in the modern era. An ineluctable path to modernization suggests that the history useful for U.S. strategic thinking about the Arab world, for example, reaches back only to the end of the Ottoman Empire. The rise of secular nationalism, the modern administrative state, and better trained and equipped armies during the late Ottoman Empire provide a historical narrative that accords with an assumption of state-driven modernity. The rest of history shrinks to a strategically irrelevant preamble consigned to rarefied academic pursuits.