The Return of ‘Blame America First’ 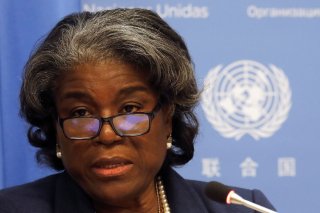 Countries send ambassadors to the United Nations to defend their interests and stand up for their fellow citizens, not to impugn their nation’s origins and principles. Somebody should explain this to President Joe Biden’s new envoy to Turtle Bay, Ambassador Linda Thomas-Greenfield.

In a shameful performance delivered in a speech to Al Sharpton’s National Action Network, Thomas-Greenfield declared, “I have seen for myself how the original sin of slavery weaved white supremacy into our founding documents and principles.”

What a gift to the ambassadors from China, Russia, Cuba, Iran, Venezuela, and the other pariah nations that constantly trample on the human rights of their citizens. No need to craft their own accusations when they can simply cut the remarks of the U.S. ambassador and paste them into their own speeches denouncing the United States.

This should be shocking. Sadly, it has become all too common on the American Left to view the United States as a racist nation that is irredeemably flawed. Critical race theory, a discipline that seeks to dismantle all of America’s institutions, is making great strides domestically and is no longer confined to university campuses. As demonstrated by Thomas-Greenfield’s comments, it is infecting the highest levels of government.

Former U.S. Ambassador to the United Nations Jeanne Kirkpatrick had a name for these individuals. She called them the “blame America first” crowd. Every problem, in their eyes, had an American derivation.

Kirkpatrick knew how dangerous this perspective was. Quoting French writer Jean Francois Revel, Kirkpatrick warned, "Clearly, a civilization that feels guilty for everything it is and does will lack the energy and conviction to defend itself."

Happily, America resisted this self-doubt four decades ago and rallied to win the Cold War, saving the world from the totalitarian oppression of the Soviet Union.

But America is again experiencing an internal identity crisis. An increasing portion of the American citizenry has been taught to abhor the very foundations of the nation. This is incredibly harmful not just domestically, but internationally. If Americans lack pride and confidence in their nation and the principles that make America so special, then how can they effectively communicate why U.S. values or the U.S. vision and perspective on human rights should prevail?

Thomas-Greenfield spins this as “humility” and argues that admitting America’s flaws is a show of strength that gives the United States greater credibility to discuss human-rights problems in other countries.

Perhaps that was her intent, but her speech is missing a key component. Listening to Thomas-Greenfield, you would look in vain for a list of America’s redeeming virtues or acknowledgment of the progress made over time to fulfill its founding principles. Why should others listen to America on human rights when its own U.S. Ambassador will not defend U.S. history or its human-rights record?

America is not perfect. Slavery is the preeminent shame that the nation bears. But it is a stain that, tragically, America shares with nearly every other nation that existed on Earth until the advent of the modern anti-slavery movement.

To America’s credit, it confronted this shame and overcame it at an enormous cost of life. Through the Civil Rights movement, America continues to tackle the segregation and discrimination that followed. None of this means we are perfect, of course; racism remains in the heart of far too many. But today, the country continues to fight, growing in the strength of E Pluribus Unum.

Progress is evident. America recently elected a Black man as president and a woman of Black and Asian descent as vice president. Both are the children of immigrants. Immigrants have become titans of industry and Members of Congress. There is a reason that millions want to come to America, and it’s not because America is systematically racist. It’s because America remains a land of opportunity and fairness that most of the world can only dream of.

To assert that racism and white supremacy are embedded in America’s national character and weaved into its founding documents does a disservice to the Founders who established an exceptional nation on the notion that all men are created equal and are endowed by God with inherent, natural rights separate from government. It diminishes the struggles of so many over who have throughout history sought to fulfill that vision.

The charge of a pro-slavery Constitution was “a slander upon [the] memory” of the Framers, he contended; “interpreted as it ought to be interpreted, the Constitution is a glorious liberty document.” Consider “the constitution according to its plain reading,” Douglass continued, “and I defy the presentation of a single pro-slavery clause in it. On the other hand it will be found to contain principles and purposes, entirely hostile to the existence of slavery.”

Or the views of King, who drew inspiration from the “the magnificent words” of the Constitution and the Declaration of Independence, when he expressed fidelity to the American dream that “all men, yes black men as well as white men, would be guaranteed the unalienable rights of life, liberty, and the pursuit of happiness.”

Douglass and King valued America’s founding principles and urged their fellow Americans to strive toward them even as the imperfection of man hindered their realization. While the dream remains in front of us, the progress made is undeniable. To state otherwise is not simply wrong; it undermines America’s standing to defend and promote human rights, which Thomas-Greenfield says is her goal.

Smelling vulnerability in this sentiment permeating the Biden administration, China has exploited it at the Alaskan Summit, with accusations of racism and America’s “evil past of genocide” in the Human Rights Council, and by pronouncing the five sins of U.S. human rights. Thomas-Greenfield’s comments will add fuel to this fire.

When other nations sought to similarly exploit U.S. history in the 1970s, Ambassador Daniel Patrick Moynihan represented the United States in Turtle Bay. Instead of focusing solely on America’s flaws, he defiantly argued that, for all its flaws, America remains a great nation:

Am I embarrassed to speak for a less than perfect democracy? Not one bit. Find me a better one. Do I suppose there are societies which are free of sin? No, I don't. Do I think ours is, on balance, incomparably the most hopeful set of human relations the world has? Yes, I do.