Return of the Empire: Why Erdogan Wants to Resurrect the Ottoman State 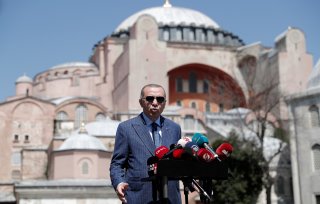 Much has been written about the immediate reasons behind Turkish president Recep Erdogan’s move to change the character of Hagia Sophia from a museum back to a mosque. While factors such as Erdogan’s search for populist moves to shore up his declining popularity brought about by economic incompetence, the precipitous fall of the lira, increasing unemployment, and his authoritarian style of governance help explain the timing of this action they do not shed light on why a large proportion of the Turkish population has enthusiastically welcomed this move.

This can only be explained with reference to the recent history of Turkey spanning a hundred years. Turks consider themselves to be the true heirs of the Ottoman Empire. Ataturk’s efforts and those of his authoritarian Kemalist successors to wipe out the Ottoman past in order to create a republic of their dreams custom-made for Europe may have temporarily driven this feeling underground but were never able to remove it from the psyche of the large majority of the Turkish population. Among other things, the immense popularity of Turkish films with Ottoman themes and TV series, such as Ertugrul, which is based on the life and exploits of the father of the founder of the Ottoman Empire, testify to the veracity of this assertion.

These deep-seated sentiments among the population of the Anatolian heartland surfaced dramatically with the election of the Erdogan-led Justice and Development Party (AKP), which took pride in Turkey’s Ottoman and Islamic past, to power in 2002. AKP’s victory not only rendered the secular political elite largely drawn from the western coastal belt powerless, but it also drastically reduced the influence of the secular military brass that considered itself the protector of Kemalist ideology in the political life of the country. It was a coalition of the religiously observant populace of Anatolia and the anti-authoritarian liberal elements in the coastal areas that brought AKP to power and helped dismantle the military-dominated Kemalist authoritarian power structure in the country.

While the liberal elements have become disenchanted since 2013 with Erdogan’s authoritarian tendencies the religiously observant Anatolian heartland has, by and large, stood by him so far. This has meant that Erdogan has been forced to cater more and more to the sentiments of the observant population who are the standard-bearers of the Ottoman legacy since the Ottoman Sultan was also considered to be the Caliph of Islam and the symbol of the Muslim triumph over Christian Europe especially during the first three centuries of the Ottoman empire. At the height of the Ottoman Empire the Sultan-Caliph ruled over one-third of Europe and as late as 1683 Ottoman armies were knocking at the gates of Vienna. It was only in the second half of the nineteenth century that the empire began to gradually unravel and steadily lost its European possessions in the Balkans. It was finally dealt a deathblow as a consequence of its defeat in World War I when its Arab parts were removed from imperial control.

To add insult to injury, the Treaty of Sevres imposed on the defeated Ottoman regime by the victorious allies carved up the Anatolian Turkish rump of the empire as well. Western Anatolia was awarded to Greece and southern Anatolia and southeastern Anatolia were respectively assigned to Italy and France as their “zones of influence” in reality semi-colonies. Moreover, significant portions of eastern Anatolia were to be turned into Kurdish and Armenian enclaves or proto-states. This was too much to bear for the Turkish population of Anatolia and especially for the Turkish army that under Mustafa Kemal (later called Ataturk) rose in revolt against the Ottoman Sultan who had signed the instrument of surrender.

In a hard-fought war of independence that lasted four years, the Turks threw the Greeks out of western Anatolia and rendered the Italian and French zones as well as the Armenian and Kurdish proto-states null and void. However, Ataturk had the strategic sagacity not to reclaim the non-Turkish Arab portions of the Ottoman empire as it would have brought the nascent Republic of Turkey into direct conflict with Britain and France, who had taken over as mandatory powers in the Fertile Crescent, and might have aborted his attempt to maintain the sovereignty and independence of Muslim Turkey in its current geographic contours. The new boundaries of Turkey were delineated at the Treaty of Lausanne signed in 1923 at the successful end of the Turkish war of independence more or less in line with the borders set out by the Turkish Grand National Assembly.

The popular Turkish reaction to the reconversion of Hagia Sophia (known as Aya Sophia in Turkish) cannot be explained without reference to these historical facts. The attempt by the “Christian” allied powers to carve up the Turkish homeland in addition to detaching the non-Turkish portions of the Ottoman Empire and dividing them up among themselves have been strong reminders for the Turks over generations of their loss of greatness. The transformation of Hagia Sophia from a mosque to a museum was perceived as a part of this loss that needed to be remedied.

The mosque of Hagia Sophia was a major symbol of the Ottoman victory over the Byzantine Empire in 1453 and an emblem of Turkish pride. Ataturk’s decision to turn it into a museum to display its dual Byzantine and Islamic heritage was an attempt to demonstrate both a break from what he considered to be the decrepit Ottoman past and to establish Turkey’s credentials as a “civilized” nation in the eyes of the West. But, this decision had been resented by the religiously observant Turkish masses imbued with the combined spirit of Islam and Ottomanism.

These feelings remained dormant as long as the secular and authoritarian Kemalist elites, both civil and military, held near-absolute power in Turkey. However, when the equation changed with the rise of the AKP to power in 2002 this viewpoint began to reassert itself. Erdogan and the AKP leadership had resisted the pressure to change the status of Hagia Sophia as long as they believe that Turkey had a reasonable chance to enter the European Union and the Turkish economy was flourishing under Erdogan’s leadership. However, it has now become clear that the door to Turkey’s membership of the EU has been firmly closed thanks to the opposition of major European powers who feel that the Christian character of EU will come under threat by the inclusion of Muslim Turkey. Former French president Giscard d’Estaing summed up this feeling succinctly declaring, “European civilization is Christian civilization.”

Thus, the reconversion of Hagia Sophia into a mosque, which it had been for close to five hundred years, as a move to revive his dwindling popularity appeared an attractive and relatively costless proposition to Erdogan. However, such a move cannot succeed in a vacuum for it would not work if it did not touch a vital chord in Turkish hearts. That the decision would appeal to a large majority of Turks is the gamble that Erdogan has taken and there is sufficient reason to conclude that it will probably work to his benefit.

Several years ago a secular Turkish academic and a good friend told me “Ataturk was a great man but he left us a people without history.” Turning Hagia Sophia once again into a mosque is seen by a substantial segment of the Turkish population as part of the effort to reclaim their country’s history.