The Return of the Indo-Pacific Quad 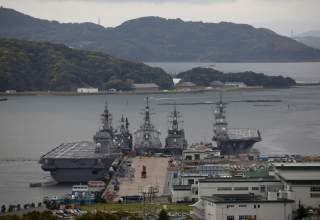 In March 2018, The Heritage Foundation, in partnership with three leading think tanks from Australia, India and Japan, held the fifth iteration of its “Quad-Plus Dialogue” in Tokyo, Japan. Inaugurated in 2013, this unique Track 1.5 dialogue was designed as a forum for think tank and government representatives from the four democracies to discuss common geopolitical challenges and promote greater strategic collaboration. Equally important, it was intended to encourage the four governments to revive the formal Track 1 Quadrilateral Strategic Dialogue (QSD) which first met in May 2007 but was disbanded the following year.

Participants in this year’s Quad-Plus Dialogue included analysts from India’s Vivekenanda International Foundation (VIF); the Australian Strategic Policy Institute (ASPI); and this year’s host, the Japanese Institute for International Affairs (JIIA). The “Plus” portion of the Dialogue invites participation from a fifth country with interest and stakes in the strategic matters being covered at the dialogue. In 2018, representatives from Taiwan’s Institute for National Policy Research (INPR) joined the discussion the Dialogue’s Plus-partner. Previous years featured experts and officials from Indonesia, the Philippines, Sri Lanka and Singapore.

This year, analysts from the four think tanks have issued a joint vision statement, signaling their commitment to enhancing quadrilateral cooperation among the four parties and providing recommendations for taking the initiative forward.

The Birth and Fall of the Quad

The impetus to create the Quad-Plus Dialogue arose out of collapse of the first official Quadrilateral Strategic Dialogue (QSD). In May 2007, government representatives from the four democracies gathered for the first times on the sidelines of an ASEAN Regional Forum meeting in Manila. It was a leap of faith for the four countries, particularly India, which was still wary of perceived “alignment” with the U.S. and its security partners. Some interest groups worried China would view the Quad as evidence of a budding containment strategy and their protests grew louder after the four countries, joined by Singapore, held an unprecedented multilateral naval exercise later that year.

Domestic politics forced the resignation of Japanese Prime Minister Shinzo Abe, one of the Quad’s intellectual godfathers, nine days after the Malabar naval exercises of September 2007. Three months later, a Labor government assumed power in Australia determined to strengthen engagement with Beijing. In early 2008 it very publicly signaled its disinterest in continuing the Quad, under the watchful eye of China’s foreign minister. As I wrote in The Diplomat magazine this April:

“A great deal of ink has been spilled dissecting the failure of the first QSD but its great flaw wasn’t its underlying purpose, agenda, or membership; it was its timing. In 2007 Beijing was still effectively marketing a soft power offensive while the four democracies struggled to reach internal and external consensus on the nature of the challenge China was posing and the appropriate response.”

Much has changed since then. The case for the Quad is arguably more compelling now than it was a decade ago. The great irony of the first iteration of the QSD was that it dissolved precisely at the dawn of China's new, more aggressive approach to regional affairs. Beijing has adopted a progressively more nationalist foreign policy since the global financial crisis of 2008, a trend further accelerated by Xi Jinping’s rise to power in 2012.

Each member of the Quad's relationship with China has deteriorated in key arenas, even as each has tried to maintain robust economic and diplomatic ties with Beijing. Yet even those bonds are beginning to show signs of wear.

China-U.S. economic ties have arguably reached a political nadir, with Beijing and Washington on the cusp of a real trade war. With India, China has consistently proven unwilling or unable to address a key Indian political sensitivity—its ballooning trade surplus, which grew an additional 23 percent this year even as total trade has flatlined. China’s economic and political influence in Australia has come under tremendous public scrutiny over the past year.

On the geopolitical front the picture is bleaker. The Trump administration’s 2017 National Security Strategy painted China in more starkly competitive terms than any of its recent predecessors. Tensions over China’s growing footprint in the Indian Ocean and among India’s subcontinental neighbors has added another layer of friction to an already prickly rivalry. And China’s dispute with Japan over the Senkaku Islands shows no signs of subsiding.

Meanwhile, each member of the Quad has expressed concerns about—and refused to endorse—China's pre-eminent Belt and Road Initiative (BRI), with India taking the early, lonely lead. The Quad has also found common ground on the importance of the rules-based order and the underlying tenets of the U.S. and Japanese visions for a Free and Open Indo-Pacific.

The Return of the QSD

Against this backdrop, in November 2017 the four countries reconstituted their Quadrilateral Security Dialogue, which met again for a second time in April 2018. Not only is the Quad’s logic more compelling now, but its foundations are stronger.

In the decade since the last QSD the democracies have been strengthening trust and functional cooperation at a bilateral level and across a trio of complementary, overlapping trilateral strategic dialogues. In 2007 India had virtually no U.S. military hardware to speak of; it now hosts advanced U.S. surveillance and transport aircraft, artillery, attack helicopters and missiles. Soon it may induct U.S. armed drones and potentially even fighter jets.

Japan has reinterpreted its constitution to allow for greater defense cooperation with America and other security partners. Australia and India recently began their first bilateral military exercises. A long list of new joint exercises, arms sales, military interoperability agreements, shared vision statements and intelligence sharing arrangements have strengthened the foundations of one of the world’s most robust informal security networks.

To be sure, the Quad is not without its challenges. India remains perhaps the most circumspect member, still embittered by Australia's withdrawal from original QSD and concerned another Labor government in Canberra could prompt another readjustment of its China policy. In some cases, the trilateral forums remain the preferred venue for substantive achievements. All four countries, particularly Japan and Australia, are struggling to walk a tightrope between robust security balancing while maximizing opportunities for economic engagement.

It’s also important to acknowledge what the Quad is not. For example, it is decidedly not an alternative to China’s BRI, though the four democracies are strengthening collaboration on regional connectivity initiatives that promote good governance, transparency, accountability and sustainable debt financing. Nor does the Quad represent a containment strategy targeted at China, a futile proposition so long as China remains a top trading partner for each member of the Quad.

The Quad is a symbolically and substantively important addition to an existing network of strategic and defense cooperation among four particularly capable democracies of the Indo-Pacific. What makes the Quad unique is that its members are powerful enough militarily and economically to resist various forms of Chinese coercion while offering the “muscle” necessary to defend the foundations of a Free and Open Indo-Pacific from potential challengers.