Revealed: How America and Britain Planned to Destroy the Middle East's Oil 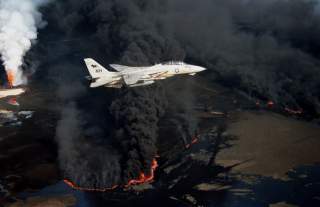 Image: “A U.S. Navy Grumman F-14A Tomcat from Fighter Squadron 114 (VF-114) Aardvarks flies over an oil well set ablaze by Iraqi troops during the 1991 Gulf War. VF-114 was assigned to Carrier Air Wing 11 (CVW-11) aboard the aircraft carrier USS Abraham Lincoln for a deployment to the Western Pacific and the Indian Ocean from 28 May to 25 November 1991. This was VF-114's last deployment before being disestablished on 30 April 1993.” Photo by Lt. Steve Gozzo, USN, via Wikimedia Commons.