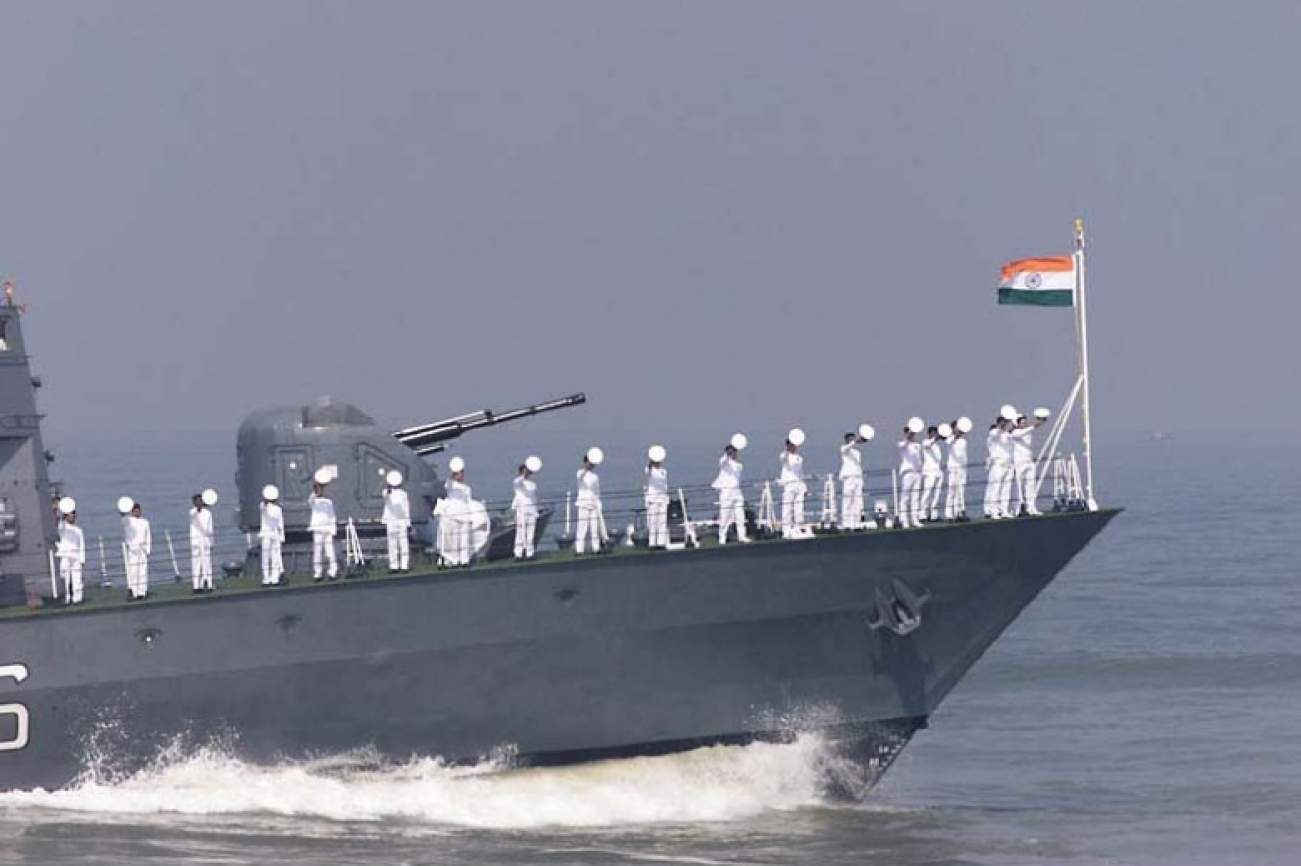 Recent developments in the Indian Ocean have been a witness to India’s mustering enough political will to advance its regional interests through actionable deliverables, visibly in opposition to mere notional assertions of the past. As India reorients its Indian Ocean policy, a tripartite transformation is underway—a regional outlook that ties together India’s Act East policy, its Look West policy and, most noteworthy, its cooperation with the United States in the regional maritime domain.

The transformation from a Look East to an Act East policy has been at the center of India’s maritime recalibrations in the past few years. Such an approach has been accompanied by an improvement in relations with not just the individual countries to its east, but with strong regional organizations such as ASEAN. Countries of specific focus for India have recently included Vietnam, Brunei, Thailand and Indonesia.

The maritime area extending from India’s Andaman and Nicobar Islands has also been critical to India’s recent regional maritime calculus. The focus on the Andaman Sea, for instance, has been critical to both India’s developing role in the Indo-Pacific as well as its by now axiomatic desire to be a regional net security provider. In this regard, from April 19–27 in the Andaman Sea, INS Karmuk along with a Dornier maritime patrol aircraft participated in the twenty-second Indo-Thai Coordinated Patrol (CORPAT). CORPAT has been underway since 2005, taking place biannually to ensure the safety of international trade and shipping lines. The twenty-second CORPAT had a clear focus on search and rescue at sea and preventing unlawful activities, furthering India’s regional net security provider agenda. India has also extended naval cooperation with Thailand in other areas, such as training of Thai navy and coast guard trainees. For this purpose, Indian naval ships Tir and Sujata and sail-training ship Sudarshini, along with the Indian Coast Guard’s Varuna, were deployed in Phuket, Thailand as part of an overseas deployment this spring.

Another country that has been involved with India recently in maritime CORPAT exercises is Indonesia. The Indonesian-Indian CORPAT followed the Indo-Thai CORPAT. The 2016 CORPAT exercises between the two countries marked the twenty-seventh in the biannual series since 2002. In the ongoing exercise, which lasts almost a month, both countries are working to secure Indian Ocean sea lanes from the twin threats to commercial shipping and international trade, besides improving interoperability—a rather manifest component of most maritime exercises. Since 2014, both navies have consistently raised the bar for the next year in terms of resources and commitment. The most outstanding factor of the latest chapter of Indonesian-Indian CORPAT exercises has been the geostrategic optics involved in choosing the venue of Port Blair in the Andaman Sea, once again underscoring the high priority accorded to the maritime area in India’s latest Indian Ocean policies.

India’s eastward maritime attention has been complemented by unprecedented multilateral diplomacy with the ASEAN Defense Ministers’ Meeting Plus (ADMM Plus). Between March 2–8 this year, India hosted on its soil a multinational field training exercise called “Force 18,” comprising the eight dialogue partners of the ADMM Plus. These countries included important countries to India’s east like China, Australia, South Korea and New Zealand. The peacekeeping component of Force 18 focused on regional stability.

India’s eastern maritime inclination has been further concretized by its enhanced focus on the Andaman Sea, and by extension the Indo-Pacific. The aforementioned CORPAT exercises largely took place in the Andaman Sea. The maritime area comprising the Andaman Sea has become strategically crucial for India over the years. This message was made loud and clear when India built its first Tri-service theater command of the Indian Armed Forces, based at Port Blair in the Andaman and Nicobar Islands. The post has assumed special strategic significance, not only because it allows India to keep a close watch on China’s naval forays in the Indian Ocean, but also because it proves a good launch pad for India’s anticipated net-security-provider role in the region.

Besides India’s aforementioned eastern maritime rejuvenation, the latest step has involved an Indian geostrategic push for the South China Sea, which the Ministry of Defence in India has labeled a region of “of vital strategic importance to India.” On May 18, India sent four ships of the Indian Navy’s Eastern Fleet for a two-and-a-half-month operational deployment to the South China Sea and northwestern Pacific. India’s step, coming on the heels of several bilateral steps to increase maritime cooperation with the United States in the Indian Ocean and the Asia-Pacific, has been widely interpreted as pitting India against growing Chinese maritime dominance in the region.

The Andaman Sea, along with the larger Indo-Pacific, has become indispensably critical to the joint India-U.S. regional grand maritime strategy that is in the making. This has been sufficiently established by both the gradual strengthening of the U.S.-India defense partnership through deliverables, and the series of bilateral agreements signed between the two countries, bringing them closer than ever before. India and the United States signed the “U.S.-India Joint Strategic Vision for the Asia-Pacific and Indian Ocean Region” in January 2015. The mention of the South China Sea, together with “freedom of navigation and over flight,” brought out the common interests between the two countries in the Asian maritime theater.

This sentiment was supplemented by the Logistics Exchange Memorandum of Agreement (LEMOA) agreed to, though not signed, during the visit of the United States’ Defense Secretary Ashton Carter to India in April 2016. The LEMOA contains apparent anti-China rhetoric. Ashton Carter’s April visit also underscored the need for a navy-to-navy bilateral discussion between the two countries on the issue of antisubmarine warfare. China’s submarines, which have been spotted more frequently in the Indian Ocean since 2010, have raised hackles both in New Delhi and Washington, causing the countries to come together on the issue. To advance the pledge made in April this year, India and the United States have started discussions on antisubmarine warfare (ASW). ASW is likely to prove a critical maritime deterrent strategy against China’s Indian Ocean adventures. The most likely cooperation in ASW between India and the United States will be in naval aviation, as India’s naval aviation has reached a “threshold of transformation.” The United States’ Boeing P-8A Poseidon maritime patrol/anti-submarine warfare aircraft and the Indian Navy’s P-8I Neptune, an export version of the P-8A, constitute the most modern ASW technologies.

More notable is the maiden maritime security dialogue between India and the United States held recently, where both countries discussed Asia-Pacific maritime challenges, naval cooperation and multilateral engagement, stressing the bilateral maritime agenda. The involvement of officials from the Defence and External Affairs Ministries of India shows that the current establishment is demonstrating renewed policy seriousness toward India’s littorals.

The rhetoric surrounding a regional grand strategy in the Indian Ocean and the Indo-Pacific has been gradually moving from a stage of tacit consent to one that is fast becoming unequivocal. During his most recent visit to New Delhi, the commander of U.S. Pacific Command, Adm. Harry B. Harris, invoked the idea of the now defunct Quadrilateral Initiative, in a clear shot at reviving the idea of cooperation between India, Japan, Australia and the United States. Outlining his choice of the term “Indo-Asia-Pacific” versus the term “Asia-Pacific,” he voiced Washington’s desire to bring back Australia to the quadrilateral maritime partnership that went awry due to Beijing’s opposition soon after it was proposed in 2007.

Although India has officially protested at some of the aforementioned Chinese steps in the Indian Ocean, it has considered a long-term comprehensive maritime response to increasing Chinese footprints in the Indian Ocean to be a fitting countermeasure. India’s recent finalization of the Chabahar Agreement, along with Iran and Afghanistan, is aimed at mitigating Chinese leverage in the Indian Ocean through its unbridled access to the Gwadar port. This has been backed by India’s heightened sense of responsibility towards guaranteeing security in the Indian Ocean, besides a show of strength in the Persian Gulf. India has increased routine reconnaissance in the western Indian Ocean. Recently, a naval Poseidon-8I long-range patrol aircraft on routine reconnaissance thwarted a pirate attack on the high seas by flying over a merchant vessel that was being targeted by three pirate ships, around eight hundred nautical miles from Mumbai.

The Narendra Modi government has made a deliberate push to improve India’s maritime policy to the west by improving naval relations with countries like Iran, Saudi Arabia, the UAE, Kuwait and Bahrain. On April 24, 2016, India confirmed that it would send a flotilla of warships to the Persian Gulf to add military heft and improve naval relations with some of the Indian Ocean countries. Since that promise, INS Delhi, Tarkash and Deepak have anchored in Dubai to bolster naval relations between India and UAE. Importantly, both countries are expected to perform a joint naval exercise in the region, sending strong regional signals. The three warships continued their goodwill visit in Bahrain and Kuwait, expanding the scope of India’s maritime cooperation with Gulf countries in combating piracy and maritime terrorism.

These diplomatic feelers on either side of peninsular India had an appropriate prelude in Modi’s earlier landmark visits to Seychelles, Mauritius and Sri Lanka, besides his numerous other oceanic overtures in the Indian Ocean. Modi has also led India’s leasing out of Assumption Island from Seychelles, marking a historic shift in India’s expansive reconnaissance and surveillance designs in the Indian Ocean. India’s enhanced maritime focus on either side of its peninsular landmass has also been supplemented by a quest for dominance through competition with China, towards the south.

India recently has sought to boost maritime cooperation with the Maldives, too. In April of this year, India deployed its Advanced Light Helicopter MK III at Kadhdhoo Island in the Maldives in a bid to assist that country in search and rescue, casualty evacuation, coastal surveillance, maritime reconnaissance, communication and logistic duties. While Mauritius has been caught in intense maritime cooperation between India and China, most speculations have rendered Seychelles finally falling in India’s geostrategic corner. More importantly, India has pushed for the spirit of south-south cooperation in the southern Indian Ocean, most notably through its recent maritime cooperation, along with Brazil and South Africa, called IBSAMAR.

India’s latest bid to change its maritime character has involved engaging with a host of countries to its east as well as to its west, marking India’s new bidirectional strategic maritime loops. While its western maritime loop has included the Gulf countries like Kuwait, Bahrain, Iran and Saudi Arabia, its eastern maritime loop intends to tie the ports of Cam Ranh Bay in Vietnam, Subic Bay in the Philippines, Sasebo in Japan, Busan in South Korea, Vladivostok in Russia and Port Klang in Malaysia.

India’s push at bettering naval relations with the countries in Southeast Asia, the Gulf countries and countries to its south is part of a larger maritime agenda, to form as well as lead a new institutionalized response in the region that is largely led by the Indian Ocean Naval Symposium—a body which has served as a forum for sharing information and cooperating on maritime issues in the region, but more importantly, which aspires to turn around India’s regional maritime purpose.

Vivek Mishra is a Fulbright Visiting Scholar at the Saltzman Institute of War and Peace Studies, Columbia University and is finishing his PhD on "American Maritime Strategy on the Indian Ocean in the post Cold War era, 1990-2012" from Jawaharlal Nehru University, New Delhi.