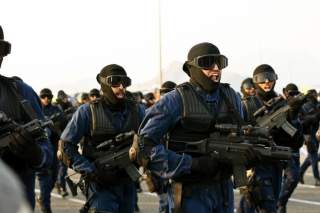 Almost immediately after the death of King Abdullah Bin Abdulaziz of Saudi Arabia on January 22 and the ascension of his half-brother, Salman, to the throne, Saudis and Saudi-watchers in the West began speculating about the contours of Saudi domestic and foreign policy under the new king. While the first speech delivered by Salman within hours of becoming monarch stressed continuity, some seemed convinced that Saudi foreign policy in particular might experience an important shift under his watch. A mere two months after assuming the crown, it is becoming clear that King Salman has a different vision than did his predecessor Abdullah, and perhaps all those who came before him. Between restructuring some of the country’s most important political and economic institutions and launching an unprecedented, large-scale military operation in a neighboring country on the verge of a civil war, we could be witnessing the beginning of a completely new Saudi way of thinking. We could be on the verge of a Saudi perestroika.

The notion that Salman intends to forge his own unique legacy, gained credence a week into his reign, when he not only orchestrated one of the more significant cabinet reshuffles in recent history but also engineered a major overhaul of some of the kingdom’s advisory bodies. Royal decrees he issued eliminated twelve different political and economic advisory bodies. In their stead, he created two new bodies, one overseeing the Economy and Development, the other Political and Security Affairs. While some described the move as Salman’s attempt to consolidate power, others saw it as needed “streamlining” of an inflated bureaucracy.

While the cabinet reshuffle and bureaucratic restructuring was the talk of Saudi Arabia for days, the international community was more interested in gleaning clues about the direction Saudi foreign policy might take under Salman, especially at a time of widening violence in Syria, Iraq, Libya and Yemen.

Much of the speculation about a shift in Saudi foreign policy centered on whether the new King would adopt a more flexible position regarding the Muslim Brotherhood than King Abdullah. Not only did Saudi Arabia list the organization—and presumably all its affiliates—as a terrorist organization in late 2014, Saudi religious leaders and media began referring to the Muslim Brotherhood and the so called Islamic State—the terrorist group that now controls a wide swath of land across the Syrian-Iraqi border—interchangeably. However, the first sign that the kingdom could be moderating its stance on the Brotherhood came during a recent interview with the Saudi Foreign Minister, where he was quoted as saying: “We do not have a problem with the Muslim Brotherhood; our problem is with a small group affiliated to this organization.”

Despite long-standing rumors that King Salman was in “poor” health, he has managed to meet with close to twenty world leaders since becoming king, electing to receive most of them at elaborate ceremonies at Riyadh’s airport. While the king has met with a fair number of foreign leaders, including President Obama, it has been the near daily meetings with leaders of Muslim-majority countries that attracted the attention of many.

They included Turkey’s Erdogan, Egypt’s al-Sisi, Pakistan’s Sharif, and most of the leaders of the member states of the Gulf Cooperation Council. The meetings led some Saudis and observers in the West to maintain that the Saudis were reevaluating all their key bilateral relationships with regional countries. Others went further and contended that the Saudis were in the process of forging new alliances in the hope of forming a united front to confront what they consider to be the two major threats to the own national security and to the stability of the region: Iran and ISIS.

For six decades, the relationship between the United States and Saudi Arabia was predicated on a mutually beneficial arrangement: the United States would become the ultimate guarantor of Saudi security—as was the case in the 1991 Gulf War—in exchange for latter maintaining an adequate supply of oil that keeps global energy markets stable and oil prices moderate.

However, the Arab Spring, which saw the fall of several long-time Saudi allies, forced the Saudis and Americans to reevaluate many of their assumptions about the region and about the parameters of their own relationship.

This conclusion seems to have crystallized when the United States decided against launching airstrikes against the Assad regime in Syria in August 2013, after he had crossed President Obama’s self-imposed “red line” by using chemical weapons outside the Syrian capital. And while the Saudi and United States are both committed to destroying ISIS, the Saudis have made it clear that as long as Bashar al Assad remains in power, and his regime continues to slaughter Syrian Sunnis, ISIS will be able to replenish its ranks with Sunni militants.

However, it is Iran that is proving to be the most serious point of contention between the United States and Saudi Arabia. As the United States, along with the rest of the P5+ 1 countries, works towards concluding its negotiations with Iran over its nuclear capabilities, the Saudis and Iranians find themselves on opposite sides in just about every major conflict in the region, including Syria, Iraq, Lebanon and Yemen. While the Saudis have expended much political capital in Syria and economic capital in Lebanon,  they’ve made it clear that they consider extensive Iranian “meddling” in Yemen to be their own “red line.”

The Saudis have a long and mixed track record of involvement in Yemen’s numerous conflicts, dating back to the early 1960s. Their inclination has been to either use their extensive contacts with political and tribal elements to forge negotiated settlements or to choose a side in the conflict, assist it financially, and provide it with weapons occasionally, but not to involve its own troops in the fighting.

The Saudis have also spent millions trying to contain the violence in Yemen, by building a sophisticated security fence along their southern border. But in addition to the Iranian-supported Houthis, Yemen has been further destabilized by the dangerous Al Qaeda in the Arabian Peninsula (AQAP). The terrorist group in fact crossed the Saudi border last June and managed to kill several Saudi security personnel. To add to the volatile mix, there are strong indications that ISIS has also established a  presence in Yemen and even claimed credit for the deadly bombings that targeted Shia mosques in Sana’a last week.

The decision to launch a military operation whose objective is to drive the Houthi rebels back to their strongholds in the north and to force them to the negotiating table marks a significant departure from Saudi Arabia’s characteristic behind-the-scenes, quiet diplomacy that had played a role in ending the fifteen-year Lebanese civil war and has tried to reconcile Hamas and Fatah in the Palestinian Territories and more recently, calmed tensions between Egypt and Qatar.

The Yemen operation appears intended to send several messages to three different audiences. It is meant to be a warning to Iran to stop its encroachment on what is traditionally considered Saudi Arabia’s “backyard” of Yemen specifically, but also its heavy involvement in “Arab affairs” in general. It is also a message to the Saudi public that the billions of dollars that have been spent on military equipment and training had not been wasted and are now paying dividends. Just as importantly, it is a message to the United States that makes clear that while Saudi Arabia still considers the United States to be a valuable partner, going forward, it will take “whatever measures necessary” to guarantee its own security, with minimal consultation if necessary, should the United States prove unable or unwilling to do so.

Some will maintain that this new thinking is the brainchild of King Salman’s thirty-year old son, the defense minister Muhammad. Whether that is the case or not, Saudi Arabia has opened a new chapter in its history that seems intent on not just conveying to the world how the Saudis view their own changing role in the region, but also seems equally determined to compel the international community to think of Saudi Arabia in a whole new light.

Fahad Nazer is an analyst at JTG, Inc and a former political analyst at the Embassy of Saudi Arabia in Washington, DC. His writing has appeared in The New York Times, CNN, Foreign Policy, Yaleglobal Online and Al Monitor, among others. His writing was also included in The Kingdom: Saudi Arabia and the Challenge of the 21st Century.