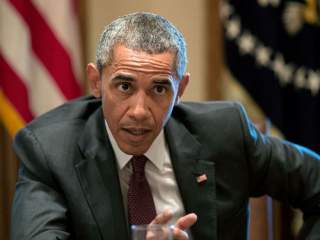 For the last seven years we have witnessed an unprecedented experiment based on a fundamental question: What would the world look like if the United States pulled back from its traditional leadership role? That was after all, the key thrust of President Barack Obama’s new foreign policy. He promised to embark on a radically new way of dealing with the world—one where we would “engage” our enemies rather than confront them.

The verdict is in.

The world is a far more dangerous place today than when Obama took office. Global terrorism is rising dramatically. The Middle East is a cauldron of war and instability. Instead of “ending,” the wars in Iraq and Afghanistan persist—and in the case of Iraq, under far worse conditions than Obama inherited in 2009. We face a terrorist threat arguably as bad, if not worse, than Al Qaeda was at its height: ISIS is more vicious, controls territory and even has a government, which, as far as safe havens for terrorists go, poses a more dangerous threat than in 2008. Russia and China are more powerful and threatening than they were in 2008. Our friends and allies are confused and afraid. And our enemies are significantly emboldened.

The new order Obama wants to establish is, unfortunately, one in which the United States cannot possibly win. It is hopelessly stacked against us: an asymmetrical strategic environment in which our adversaries can make huge gains at our expense—and at relatively low cost to themselves. Examples include not only the Iranian nuclear deal, where Tehran reaps a huge financial windfall but is left free—in ten or fifteen years (if not earlier)—to pursue nuclear weapons. They also include as Exhibit A Obama’s Russia “reset” policy, which paved the way for the annexation of Crimea and the invasion of eastern Ukraine with Russian surrogate forces.

Obama’s foreign policy has been a historic failure. But frankly, recognizing this fact does not automatically tell us how to correct it. We can’t just go back and recreate the world as it was before Obama sought to transform it. Too much water has passed under the bridge, and it will be much more difficult to get America back on track than many realize. We are in a very deep hole, and it will require brutal honesty to dig our way out of it.

We must do nothing less than completely overhaul Obama’s way of approaching the world. Every flawed assumption must be challenged. He claims adversaries will be more cooperative if we “engage” them. We must insist the opposite is true—that they stand down or back away only when they are confronted. He argues that our costs (both in terms of money and influence) go down when we appease our enemies. We must counter with the opposite; that they go up astronomically, as witnessed not only by Russia’s aggression in Ukraine but even by Iran’s bellicosity in the wake of the nuclear deal. He contends we will be more respected if we display a more open hand toward our adversaries. Polls of world opinion, not to mention the disrespect many world leaders (like Vladimir Putin) show toward Obama personally, prove otherwise. He promises a cheap and easy peace if we simply pull back and let others take the lead. We must show that the opposite is true—that peace is hard and expensive to achieve, and others, including our allies, follow only when we lead them.

The world Obama has left us is filled with new forces intent not only on threatening our security but disrupting the international order we helped create. Russia, Iran, ISIS and even China are trying to replace the old order with a new instability—perhaps even chaos—in which they win and we lose. For them, it truly is a zero-sum game. Yes, Russia and China partially benefit from the order they deride (especially China economically); but they do so mainly on their own terms, not ours or even those of the rest of the international community.

It’s in that dynamic that the asymmetry resides. It’s asymmetric because our adversaries and rivals pick and choose their fights at pressure points convenient to them, while we pretend that any attempt on our part to counter them only leads to more disorder. This is utterly false; in fact, it’s the exact opposite. Our refusal to stand up to adversaries signals a lack of commitment to that order, and to the security of our allies and friends who depend on us. Obama’s famous caution is not perceived by much of the world as a cool weighing of options (as his defenders imagine), but as indecision and even indifference. When he saves all his vigor and passion for issues like climate change, and neglects our defenses and makes deals with adversaries like Iran, he’s broadcasting his priorities loud and clear: America is getting out of the superpower business, and it’s time for the world to get used to our shrinking strategic presence.

There is only one way to reverse this dynamic: disrupt the disrupters—that is, those who wish to disrupt America’s leadership in the world. We should be thinking of ways to invert the cost ratios that now favor revisionist powers and forces like Russia, China, Iran and ISIS over us. In other words, we need to raise their costs for opposing us, while reducing the costs we incur from not opposing them. It may cost us more in the short run to challenge them, but in the long run we save because deterrence works better than appeasement. If we don’t do this, the price of peace will only go up. We will face a cascade of escalating challenges unleashed by the perception that we are an easy mark, and that it pays to challenge the United States of America.

It is true that we can never be as cynical as Russia or China in manipulating conflicts. Our values and international commitments will force us into the frustrating position of not being able always to meet them tit-for-tat. But there is no reason why we can’t make it more costly for them when they blatantly threaten us or our allies. That was the way Ronald Reagan confronted the Soviet Union, and it worked quite well.

We need to do more of some things but less of others. We must focus on what really counts, and stop chasing windmills like pretending climate change is the world’s biggest threat. We need to stand up a viable and friendly Syrian force to combat both ISIS and Syrian President Bashar al-Assad, not waste our time on fruitless diplomatic initiatives at the United Nations that serve no purpose other than to offer cover for Russia’s backing of Assad. We need to spend a lot more money on national defense and stop pretending as if advanced technology or mere “smart” diplomacy can make up for military weakness.

Above all, we must choose confrontation (mostly diplomatic, but in the case of ISIS, military) wisely but deliberately. We must be very careful about picking our fights—but when we do, we must win them. In choosing confrontation, we should think not only about the specific tactical problems involved, but whether they serve some larger strategic purpose. Think of them as inflection points that can bend a strategic curve in our favor. We must always keep the overall curve in mind, and how all the points fit together.

There are four such inflection points. First and foremost is the destruction of ISIS’s capability to make war, inflict terror and control territory. That is what defeating ISIS means. Its total defeat is necessary, not only to protect the homeland from terrorist attacks but to reverse the trajectory toward more war and chaos in the Middle East. This goal can be achieved only by interjecting a substantial increase of U.S. combat forces into the fight against ISIS.

Second is to arrange for the defeat of Putin’s adventure in Ukraine. So much is riding on whether he succeeds or not. If he pulls it off, he will likely move onto other low-hanging fruit, possibly in the Baltics. But if he fails, it will prove his gambit to change the international order in Europe has miscarried and show the Russian people that adventurism doesn’t pay. Under those circumstances, Putin could end up facing the same misfortune as Soviet leaders did after the failure of the Afghanistan invasion in 1979.

How to do this? By dramatically increasing lethal assistance to Ukraine. A year ago, such a move looked risky because Putin was on a roll and in a strong position at home. Now he faces not only a potential quagmire in Ukraine, but increasing criticism for poorly handling the economic crisis. Politically, Putin is weaker, which means he no longer enjoys the easy escalation dominance he once did.

Third, we must reverse Obama’s strategic tilting in favor of Iran. It is upending a region already roiled by bitter sectarian and state power rivalries. If not reversed, it will lead to more war and bloodshed and possibly a nuclear arms race. This will require the next president to reverse the Iran nuclear deal as soon as possible. America’s allies, who salivate over renewed commercial ties with Iran, will have to be told they must choose between Iran and the United States. If given no other choice, they will choose us.