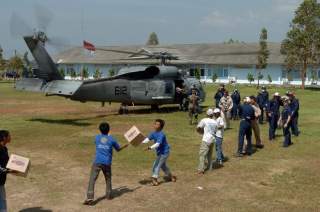 Anyone following this year’s presidential campaign would likely conclude that the twin hallmarks of a progressive foreign policy are withdrawal and disengagement, that American power is not capable of playing a productive role in the world, and that the international economy is a malevolent entity from which we need protection. These claims are exactly wrong—and they are not progressive.

In the 1920s and into the 1930s, withdrawal and disengagement were as American as apple pie, broadly held sentiments that turned out to be catastrophically wrong. Protectionism could not save us from the Great Depression—it only made that disaster worse. Isolationism did not make us safe; it allowed mortal dangers to rise unchecked and ultimately threaten our country and our way of life.

It was Democrats, starting with Franklin Roosevelt and Harry Truman (initially over the bitter opposition of still instinctively insular Republicans) who championed the engaged, U.S.-led, liberal international order—a set of arrangements, understandings and policy dispositions that, despite real blemishes, was associated with an era of unprecedented international political stability and economic growth.

The logic and wisdom that led progressives to recognize the essential necessity for American global engagement is even more compelling today than it was after the Second World War. Back then, the United States benefited (both economically and politically) from encouraging an open, expanding international economy, but the American economy was enormous, and that part of it engaged in international commerce relatively small. Similarly, back then, the world was a much bigger place, and it was less likely that political turmoil in distant frontiers might threaten a nation bounded by two oceans and weak neighbors. Today, we live with globalization, a tide that cannot simply be swept back. The American economy is a relatively smaller part of, and deeply enmeshed in, the global economy. These stubborn facts mean that the hand-waving resort to protectionism and blaming foreigners for our problems will backfire, causing economic distress—and will not, and cannot, “save” American jobs. Global market forces beyond the reach of American control, along with technological changes that cannot simply be renounced (the internet is not going away), have undercut the position of the American working class. As Bruce Springsteen explained in 1984 (ten years before the vilified North American Free Trade Agreement), “foreman says these jobs are going, boys, and they ain’t coming back.” The answer to our problems will not be found in the easy, magic-wand solutions of blaming foreigners.

In much the same way, the abdication of American power abroad would certainly lead to fewer obvious blunders—but it would make us less safe. Our long-standing military alliances and warm relations with countries in Europe and Asia have long provided a foundation for political stability and economic prosperity, to our enormous benefit. If America walks away from its commitments (or is seen as unwilling to fulfill them), that political stability could be up for grabs. More pointedly, international politics abhors a vacuum even more than nature does, and other countries and political actors, many of whom wish us ill, will swiftly look to replace American power as it retreats. It would not take long for the fruits of such isolationism—a more hostile, more dangerous world—to mature, to our dismay and distress.

As Hillary Clinton prepares to accept the Democratic nomination for president, the Democratic Party stands at a foreign policy crossroads. Turning inward and building walls (figuratively or literally) is a recipe for disaster, and it is not the disposition of real liberalism. Rather, it is time for progressives to rearticulate a forward-looking foreign policy that includes promoting civil liberties and tolerance, the protection of human rights and the need to ensure economic opportunity, and that recognizes that American power and influence (and things like trade agreements with other countries) can serve as means to these ends rather than taboo topics to be avoided. Candidate Clinton has laid out the basis for a progressive foreign policy that supports engagement, but she has yet to take a bold stand behind global economic engagement, which remains vital to peace and prosperity.

A reinvigoration of progressive foreign policy will require real soul searching within the Democratic Party. In practice, liberal internationalism has failed on two fronts, military and economic—failures rooted in hubris and elitism. With regard to the former, assertive American internationalists have now twice (in Vietnam and Iraq), at great and tragic cost, overestimated the extent to which the United States could deploy its enormous military superiority to impose its political will on others. But there is a yawning gap between delivering awesome military might and achieving one’s political goals, a lesson liberals should have been more prompt to understand. And so chastened liberals ought to be sent to the blackboard alongside Bart Simpson, and forced to write endlessly: “force must serve politics.”

With regard to the international economy, liberal elites, commonly college-educated and securely employed, have been all too willing to sweep under the rug the cold, hard fact that although trade between two countries will leave both countries, in aggregate, better off economically, trade will inevitably generate winners and losers within each country. So while it remains true that protectionism simply won’t work—it will harm our exporters and our consumers, will lose more jobs than it saves, and will leave us as a society with shoddier, more expensive, less competitive goods while damaging both the American and the international economy—the story does not end there. Ultimately trade is only unambiguously “better” because the winners from trade gain more than the losers lose, and thus, in theory, the winners could compensate the losers and everybody would be better off. But is that compensation taking place? Or are the winners, already well off, patting themselves on the back for their hard work and good fortune, leaving the losers to fend for themselves? Back to the blackboard with Bart: “free trade demands compensation.”

Properly chastened by these lessons, a progressive foreign policy can be rearticulated. And its point of departure remains that active American economic and political engagement with the rest of the world, including when necessary the flexing of military muscle, is essential for advancing our interests and for assuring that the world that we share will be a hospitable one.

A progressive foreign policy does not accept that the best one can do is secure narrow interests within the constraints imposed by the structure of world affairs and our flawed human nature. Progressives cannot ignore what is going on in rest of the world and say it is not in our interests to get involved. But they also cannot expect that all wrongs must be righted. The doctrinaire ideologue Woodrow Wilson was ultimately much less successful as a foreign-policy president than the more pragmatic Franklin Roosevelt, Harry Truman and John F. Kennedy.

How does one build a foreign policy that supports progressive ideals, but is achievable and sustainable given finite domestic resources? Bill Clinton often reminded us that just because you cannot act everywhere does not mean you should not act anywhere. But how does one decide where and when to act overseas? With whom to ally and when? When to promote freedom and human rights? And how does one decide whether to support “reformers” overseas rhetorically, by providing aid, or using force? Bill Clinton became president during a unipolar moment, and had wide latitude on deciding when to act; Barack Obama was necessarily more limited in his foreign policy aims, entering office at a time of financial crisis and American involvement in two unwinnable wars. He also recognized the distinction between America’s overwhelming military might and the ability to impose our will abroad.

The next Democratic president needs to take the best of Roosevelt, Kennedy, Clinton and Obama and adapt to the realities of our century: a world in which the United States remains the most powerful country in the world but recognizes the limits of its power and works through international institutions to promote peace, prosperity and sustainability. The country should be willing to use force, or the threat of force, not to impose its will on others but to contain threats and to achieve its core diplomatic objectives, and it should continue to articulate the benefits of an open trading order while recognizing that assistance and the fostering of new opportunities must be provided to those whose prospects have been diminished by global competition and technological change.

The challenge going forward will be working through international institutions in which emerging powers will increasingly demand a voice. Leadership through persuasion and good example will supersede leadership through imposition by power. The United States is still the world’s leading nation, and it will remain so for decades to come, given its web of alliances, technological prowess and cultural attraction, but it cannot dictate to countries such as China, India and Russia how they should behave.

As populists on the left and right cite free trade agreements as the source of most ills in the American economy, a progressive foreign policy needs to make the case anew for the importance of trade agreements such as the Trans-Pacific Partnership (TPP) and the Transatlantic Trade and Investment Partnership (TTIP). These agreements break down barriers to trade that benefit American exporters and consumers, and they deepen our alliances with like-minded partners. Support for these deals has waned dramatically in recent years for reasons that include the overselling of previous accords, profound middle class distress and anxiety, and rising economic inequality. In such an environment, empty-handed populist rhetoric from Bernie Sanders (we should have no deals) and Donald Trump (I can negotiate better deals) have resonated across the country.