Rex Tillerson May Be Finally Settling in at the State Department 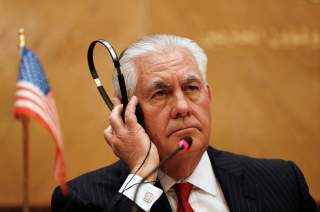 A State Department official, a holdover from the John Kerry era, tells me of her newfound respect for Rex Tillerson, Donald Trump’s once-beleaguered chief diplomat. Tillerson is “tough,” “reasonable” and a bulwark against more chaotic elements from the White House, and more ideological moves from the vice president’s office, this official argues. In charge of sensitive preparations ahead of Tillerson’s foreign visits and receptions of international leaders, this person, not a personal supporter of the president, praises the secretary’s poise, work ethic and candor. Such a testimonial clashes with some of the more lurid assessments of Tillerson’s tenure in 2017: a secretary who was said to be gutting the department at record pace, had completely lost the faith of the president, and was imminently headed for the exit gates. Tillerson isn’t going anywhere, at least in the immediate future, predicted this official. “Rex is here,” as the president once put it.

This could be because Tillerson has quietly built new support among some at Foggy Bottom and among key Congressional Republicans in early months of 2018.

A prominent Trump-supporting Congressman, and staple on right-wing television and radio (including Fox News), tells me that Tillerson and Jim Mattis, the Defense secretary, remain this member’s favorite Cabinet players. The member fears more than anything a primary challenge from the right -- and Tillerson has been sometimes characterized as in opposition to a “MAGA agenda” -- but is prepared to put skin in the game to defend the secretary to skeptics.

In the meantime, Mattis, a Defense chief who has been given near-unprecedented deference from the Oval Office, remains the second most powerful man in the United States, claims a Pentagon source. “If not the first,” says the Congressman, in half-jest. Every time the member has been at the White House, Mattis has also been there.

Within reason, access is power with this president. CIA Director Mike Pompeo makes a point of coming over from Langley, Virginia most days to personally deliver the president his daily briefing. And his “eyes remain on the prize,” a person familiar with Pompeo’s thinking tells me: replacing Tillerson, even if it’s later rather than sooner.

On the other hand, strategically limiting interactions with the president can also be a useful course, as Tillerson has also done in recent weeks. The president has shown himself most prone to dismiss White House staff, not department heads-- both because those positions are not Senate-confirmed, but also because those people are the ones right in front of him in moments of frustration and setback. The most recent example, of course, is the controversy over White House Staff Secretary Rob Porter, the handling of which has diminished, for the time being, John Kelly, chief of staff.

Another State official agrees, seeing no imminent exit for Tillerson.

In the meantime, this State Department has become more autonomous: less in sync with the White House than under Kerry (who wasn’t terribly close to President Obama, as it was), but at the same time, more prone to essentially chart its own course for the United States. A case in point was an incident I reported on late last year, where the State Department repeatedly declined to deny to me reporting done in The American Conservative by veteran defense journalist Mark Perry on White House Senior Advisor Jared Kushner’s moves in the Middle East. Tillerson didn’t exactly deny the continued frostiness between the two, in a what amounted to a triumphant appearance on 60 Minutes last weekend. As if Kushner has been foisted upon him as “shadow Secretary of State,” Tillerson told Margaret Brennan: “Well, I deal with the policies the president has asked me to execute on.”

And he downplayed his role: “In certain areas, he consults.” He did not deny that there are sometimes “competing foreign policies.” “I don’t think about that,” Tillerson said. But for Tillerson, just appearing on CBS in February 2018 a secretary, an interview in which Tillerson got to pontificate on his “code of the West” and the personal importance of the Boy Scouts of America, amounted to something of a victory. When it seemed Tillerson would be ousted for Pompeo late last -- as The National Interest and other outlets reported -- few imagined he’d be sitting in that chair, celebrating his one year mark. At the time, a former senior White House official told me Tillerson would be gone by January.

It’s not all roses for Tillerson, of course. A Trump-supporting State official complains of his sluggishness on some core concerns for Trump’s political coalition. Specifically, Tillerson has been slow to act on the plight of Christians in the Middle East. And Tillerson still draws derision for his handling of the department from many traditional voices. Tillerson has made “no attempt to explain how current global affairs necessitated a 30 percent cut in funding for diplomacy,” former State Department spokesman P.J. Crowley told me, and yet Tillerson has “justified an increase in military funding equal to the entire State Department budget. Unfortunately, the secretary seems to believe he can maintain America’s leadership position in the world with fewer resources and fewer personnel, particularly with fewer permanent ambassadors in vital posts around the world.”

But regardless of such continued complaints, the news out of Washington in late February is something that would have seemed unlikely only a few months ago: Tillerson isn’t going anywhere.