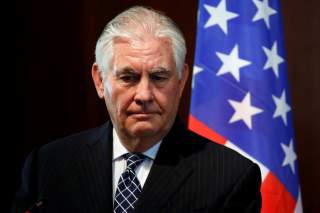 They were the closing remarks of a man who was beaten and bloodied by the Washington game:

Never lose sight of your most valuable asset, the most valuable asset you possess: your personal integrity. Not one of you was gifted it; you were born with it. It belongs to you, and always has . . . This can be a very mean-spirited town. But you don’t have to choose to participate in that.

And with those final words of advice, Rex Tillerson concluded his thirteen-month tenure as secretary of state—leaving a department whose rank-and-file were never truly supportive of the structural reforms he was trying to accomplish. The ceremony on March 22 was the end of the Tillerson era of U.S. diplomacy, a time of few (if any) major diplomatic achievements.

For much of official and establishment Washington, Tillerson’s departure is practically a gift from a higher power. The State Department’s morale, operations, annual budget and influence in the national security bureaucracy all suffered setbacks under Tillerson’s anemic leadership, which consisted of the secretary being all too frequently undercut by his own president amid the never-ending turf war with White House senior adviser Jared Kushner over the foreign policy portfolio. The oil man from Texas who grew comfortable as the big hombre at a gargantuan and highly profitable multinational corporation became just another cabinet official when he flew into Washington and took the oath of office. He was no longer the decision-maker and the big man on campus delegating responsibility to the underlings, but rather an implementer tasked with executing the president’s orders and representing the United States to his foreign ministerial counterparts.

Either out of arrogance, a sense of superiority, or personality, Tillerson failed to play the interagency game effectively by schmoozing Trump or becoming an company yes-man. But neither was he a brawler in the daily Washington scrum, where he was regularly out maneuvered by the more media savvy Nikki Haley at the UN. Within a couple of weeks, if not sooner, Tillerson learned that working for Donald Trump would not at all be similar to working for a somebody like a George H. W. Bush or Barack Obama, two presidents who respected the formal aspects of the decision-making process. While loyalty is an important trait to any president, it is the most important in Trump’s lexicon—a test Tillerson botched even before calling the commander-in-chief “a moron” to his colleagues last summer. There is no question that Tillerson played a weak hand badly, but there is also no doubt that Tillerson’s stewardship of an otherwise difficult job was made virtually impossible due to the extenuating circumstances he was forced into. As State Department veterans Aaron David Miller and Richard Sokolsky observed months ago, "the secretary’s fate was never entirely in his hands the minute he decided to offer honest instead of enabling and toady advice to the president.”

Tillerson was everybody’s favorite piñata. There is nothing unusual about dissent cables in the State Department opposing a policy or criticism about the current secretary’s performance from former administration officials who wished they themselves had the position. What was unprecedented, however, was the avalanche of abuse Tillerson received from every single direction. In the pages of the Atlantic, former senior State Department advisers were writing off the Tillerson era as "a disaster” months before it would come to an end. The Washington Post’s roster of columnists and bloggers used Tillerson’s face as target-practice; in one August post, Tufts University professor Daniel Drezner appealed to Tillerson that, having made a litany of errors since he was sworn in as secretary, he should put in his retirement papers. Then there were the endless stream of leaks to the media about how demoralized State Department employees were, how out-of-touch Tillerson was from the people he was responsible for leading, how his management was aloof and at the same time monarchal on the slightest matters (like press releases) and how he his poor relationship with President Trump was doing the department a disservice. Senior diplomats were running away from Foggy Bottom as if the entire campus was on fire and ready to burn down; the first-person stories of a cherished and distinguished U.S. foreign and civil service forced into the monotonous fielding of FOIA requests would eventually agitate Tillerson to such a point where he would attempt to nullify the reports during public events.

And then there was the White House. When Tillerson spoke about keeping communication links to North Korea open to set the table for a possible nuclear negotiation in the future, Trump reprimanded him on Twitter (as we would find out months later, Trump would embrace the very diplomatic option Tillerson advocated). When Tillerson was shuttling between Gulf Arab capitals and seeking out a resolution to perhaps the biggest internal crisis the Gulf Cooperation Council had ever faced, Trump threw his unqualified support to Saudi Arabia and UAE-imposed naval and air blockade against Qatar. The secretary's relationship with Kushner was, in a word, strained—reporting from the American Conservative’s Mark Perry paints a picture of an angry and tired Tillerson exasperated by Kushner’s expanding foreign policy brief.

At the end of the day, Rex Tillerson was not in tune with how things are done in the Beltway. Washington was a foreign creature to him, where career Washingtonians might as well have been speaking Mandarin. The foreign policy establishment and many within the State Department are celebrating his move out of the building.

But the feeling is the same on the other side. Tillerson looks at Washington and sees a town obsessed with “petty nonsense,” where human beings care more about individual access to the centers of power than the national interest and where people stab each other in the back for sport. He may have wanted to leave the Trump administration on his own terms instead of via tweet, but let’s face it: deep down, Tillerson is likely doing cartwheels in his apartment as he packs up for the return trip to Texas.