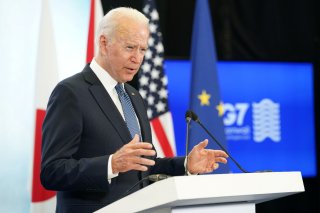 President Biden completed his first foreign trip last month, traveling to Europe for G7 meetings, discussions with NATO leaders, and a summit with Russian president Vladimir Putin. An inaugural foreign trip like this can provide several clues on the trajectory of a President’s foreign policy. President Joe Biden and his team appear to be grounding his national security doctrine around the themes of competition between democracies and autocracies, the return of American leadership, and America’s commitment to alliances. However, the conspicuous gap between President Biden’s rhetoric and actions on all three elements may risk undermining both his messaging and strategy. What’s more, the rhetoric itself may have detrimental consequences for President Biden’s efforts to build the strong coalitions he desires to compete with China.

Presidential remarks during a foreign trip are typically carefully crafted to ensure that each set of remarks – from start to finish in every setting – supports an overarching theme communicating key elements of policy and doctrine. Based on Biden’s first foreign trip, he and his team appear focused on three core messages: first, the competition between democracies and autocracies; second, the idea that “America is back;” and third, America’s commitment to its alliances – in the case of NATO, the specific commitment to Article 5.  These ideas are likely to form the foundation of Biden’s foreign policy approach in the future, including his pending National Security Strategy, foreign engagements, and ideological doctrine.

Notably, however, Biden’s rhetoric thus far appears dramatically divorced from his actions. The president frequently pointed to the competition between democracies and autocracies, including by touting his meetings with eastern flank and Baltic nations, but his administration is not taking a hard line on the Nord Stream 2 pipeline, which emboldens a distinctly autocratic Russia at the expense of democratic Ukraine – and ultimately European security.  Biden lauded America’s commitment to Article 5 of the North Atlantic Treaty, also known as the collective defense commitment. But most people know that Article 5 depends on Article 3 – NATO allies’ obligation to develop and maintain individual defensive capabilities, which received little attention.  Further illuminating the disconnect between rhetoric and policy is the fact that most of the eastern flank and Baltic states Biden references as vulnerable are meeting the 2 percent GDP defense spending obligation while their rich western counterparts, such as Germany, continue to fall short, free-riding at the expense of their less wealthy allies.  Although President Biden repeated that “America is back” throughout his travels – implying in a political jab at his predecessor that American leadership had been absent lately – his administration seems to define leadership as soothing allies’ egos and fostering interpersonal harmony. It is decidedly not about advancing unpopular, albeit important, stances on national security issues with our partners.  The problem is that this kind of approach is more in the realm of political pandering than leading.

If the gap between the president’s words and actions grows too large, he and his team risk rendering his words utterly meaningless – an outcome no one desires.  At the same time, the rhetorical focus on this competition between autocracies and democracies may alienate nations America needs in the Middle East and Asia to compete effectively against China. As a result, the rhetoric too may need overhauling. As Elbridge Colby and Paul Kapur have argued recently in separate pieces in the National Interest, that undue emphasis on the role of values, in this case, can lead the United States to overestimate European treaty allies’ contributions, while underestimating, and potentially alienating, critical non-treaty nations like India and Vietnam. An interest-based approach, in both messaging and policy, may ultimately be more effective.

It is also plausible that the Biden administration in fact defines democracies in quite narrow terms to only include select elites and countries. Wess Mitchell recently suggested that the Biden team is repeating the mistakes of the Obama years in defining Europe as Germany and the European Union leadership in Brussels. In this sense, the gap between rhetoric and policy is perhaps best understood not as an oversight, but as a mitigation strategy to distract from its true approach. The Biden administration may hope that all the talk of supporting democracies, Article 5, and American leadership will convince eastern European countries and others that the United States has not in fact simply returned to a policy best described as cocktail-party diplomacy – where strategically vital frontline partners in great power competition, such as Poland, Ukraine, and the Baltic nations, are snubbed to bolster relationships with elites in select capitals, most often at the expense of U.S. interests. Notably, this doctrine is the opposite in every respect of the “Foreign Policy for the American Middle Class” the Biden administration had promised. This approach is more aptly conceived of as a “Foreign Policy for the Global Uber-Elite.”

During a press conference following his 2018 summit in Helsinki with Putin, President Donald Trump touched on a central theme of his own trip in remarking: “I would rather take a political risk in pursuit of peace than to risk peace in pursuit of politics.” American leadership is at its best when it puts domestic politics aside, effectively marshals coalitions of diverse nations that otherwise would not cooperate, and delivers tough, but necessary messages to our partners. Leadership in this sense is no different from leadership in any other context. It is measured not by the strength of one’s popularity, but by the integrity of one’s convictions.  As the Biden administration develops its national security doctrine, it may benefit from considering this definition of leadership, taking concrete actions in support of its three thematic priorities, and ensuring that the President’s words do not inadvertently undermine his policies and strategy.

Dr. Amanda J. Rothschild is a nonresident senior fellow at the Atlantic Council and the Senior Policy Director of the Vandenberg Coalition. During the Trump administration, she served as a Special Assistant to the President and the Senior National Security Speechwriter at the White House and as a member of the State Department’s Policy Planning Staff.