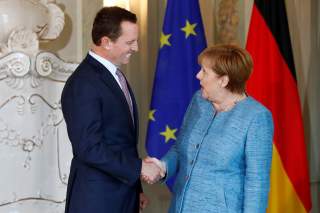 Much has been made of Ambassador Richard “Ric” Grenell, emissary to Berlin, and his unusually large portfolio in this most unusual of administrations. An alum of the George W. Bush administration, he could strike many as an odd fit for this populist-nationalist presidency. But Bush 43 alums and other more conventional Republicans have found opportunities galore with this White House, provided they didn’t sign an anti-Trump letter. Or even, increasingly, if they did. Trump is staking his midterm performance on Bush’s White House Staff Secretary, Brett M. Kavanaugh. And Jim Jeffrey, who did sign a letter, finds himself in government employ as the year winds down—as Trump’s pointman on Syria, no less.

But Grenell is no NeverTrumper made good. To the contrary, like the UN Ambassador he once served, John Bolton, Grenell is MAGA to the core. Beloved by many of the president’s staunchest supporters, including the leadership of Breitbart News, Grenell has also backed nationalists outside of the United States. “I absolutely want to empower other conservatives throughout Europe, other leaders,” Grenell told Breitbart in June. He has had little to say publicly about Angela Merkel, chancellor of the country he serves in. Instead, he showered praise on Sebastian Kurz, the right-wing wunderkind who heads Austria. Grenell says he’s a “rock star.” Stephen Bannon, the president’s former chief strategist who plans to live in Europe after the November midterms, tells me that Grenell’s support of the new conservatism is welcome, though they won’t be working in tandem. Grenell is “perfect, perfect, perfect” and has handled his post “big league,” Bannon told me. It’s clear they’re fellow travellers.

Grenell has arrived in Germany at a trying time for relations between Washington and Berlin; the rift is poised to grow ever deeper in the age of Trump. Germany’s Economic Minister Peter Altmaier said over the weekend that he now worries about anti-Americanism in German society. The homeland of the most successfully-integrated ethnic group in American history looks primed, at least under Merkel, to increasingly give the United States the cold shoulder. At the leadership level, the feeling seems mutual. Trump allowed his much-rumored animus toward Merkel to spill over into his UN General Assembly activities last week in New York. The übernationalist, perhaps deflecting, remarked at a breakfast that Merkel’s Germany is “totally controlled by Russia.” Trump cited Berlin’s oil and gas imports from the Russian Federation.

Enter Grenell, “Trump’s pointman on Europe,” a person close to the White House called him. Rather than suturing the wounds between the two powers, Grenell seems to propose shock therapy. Grenell is spending less time in Berlin than his predecessors, spreading his time more evenly between Berlin, Germany’s industrial hub Munich (Germany’s Texas) and the various consulates in the country’s more provincial cities. Is this just coincidence?

As the German elite bemoan what has become of the United States, the populist-nationalist contagion seems to have now spread to Europe’s engine. The mainstream conservative coalition that has governed Germany for years has reached historic lows, while its center-left faces catastrophe; the Social Democrats are at all time lows in recent polling. The right-wing, populist Alternative for Germany (AfD) is now firmly the main opposition to Merkel’s rule, having filled the void. Bannon tells me he’s heading to meet with their representatives in the coming days.

But Grenell’s portfolio isn’t exactly confined to Europe. Indeed, if he were to resign tomorrow, his legacy would be Tehran not Thüringen.

Grenell’s activities in Munich have a dual purpose. Perhaps no American official has more forcefully led the charge against Iran than Grenell whom I spoke to this past weekend. His efforts have been instrumental in securing the snapback of so-called “secondary sanctions”—the United States making European firms choose between the American market and the Iranian one. It is not much of a choice. Volkswagen returned to the Islamic Republic last year after a seventeen-year absence. Last month, Grenell announced that the corporation was pulling out again (though his exact characterization has been somewhat disputed). Other firms are more affirmatively getting out of the market: Daimler, business giant Siemens and Allianz. More are likely to exit the market.

This approach, especially among many restrainers, has its detractors. The administration “is succeeding in inflicting economic pain on Iran and their trading partners in Europe through brute sanctions force,” Ryan Costello, policy director at the National Iranian American Council, told me. “Yet the true measure of sanctions’ efficacy is if they can be traded in for a larger strategic purpose. That is not the case, making it doubly foolish to dash the hopes of the Iranian people for relief and encourage foreign governments to reduce their vulnerability to U.S. sanctions.”

But the White House and Grenell disagree. The Iran hawks see the Islamic Republic as Moscow in 1989, homebase for a revolutionary internationale on its last legs, if only adequate pressure is applied. Rudy Giuliani, the president’s lawyer, told me last month that the administration’s policy is all but explicitly regime change. And Grenell’s efforts grow more relevant by the day. While certain former U.S. officials are counseling the Europeans and the Iranians to wait this administration out, the European establishment is growing harder pressed by the day to continue its current course. Emmanuel Macron’s government in France on Tuesday faulted the Iranian ministry of intelligence for a foiled July bomb attack near Paris against the MEK, a main regime opposition group.

And as Merkel visits Israel this week, she’s under increasing pressure to disassociate from Iran. “The Islamic Republic of Iran would like nothing more than to see the erosion of democracy and the spread of extremist Islamic ideology around the world,” said the Jerusalem Post, an Israeli conservative mainstay, in a staff editorial Tuesday. “Merkel . . . is capable of ending German support for the Ayatollahs’ destructive dreams. We urge her to change her course.” Frank Gaffney, president of the Center for Security Policy and a White House whisperer, piles on, saying Tuesday: “Merkel is off to Israel this week. She must think her hosts haven’t noticed that her government is moving heaven and earth to do business with [Iran]. . . . Fortunately, a growing number of European companies are quite sensibly deciding to keep doing business with the United States, rather than foreclose that option by flouting American sanctions on Iran. Let’s hope Ms. Merkel will do the same.”

Iran, not North Korea, not Russia, not China, is this administration’s core foreign-policy concern. That shows no sign of letting up. Grenell’s influence behind the scenes is emblematic.