Richard Nixon: Hated for Being Right 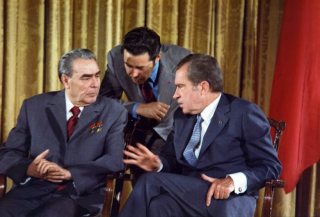 It is always harder to forgive an opponent for being right than for being wrong. Nothing illustrates this rather unattractive trait of human nature more clearly than the visceral hatred felt by the political and journalistic establishment of his day toward Richard Nixon.

As an obscure young California Congressman, Nixon rocketed to fame by playing a key role in exposing the perfidy of Alger Hiss, as witnessed by Whittaker Chambers. Hiss was convicted of perjury and subsequently exposed—in part by post-Soviet Russian sources—as a traitor.

The Hiss case would prove to be both Nixon’s making and his undoing. It propelled him to the Senate and then to selection as Dwight Eisenhower’s running mate in 1952.

But it also earned him the eternal enmity of an entire political class—“establishment” diplomats, journalists and legislators who had sincerely, but mistakenly, supported Alger Hiss as “one of us”—a polished, progressive member of the governing class that had dominated Washington ever since the New Deal. A man like Hiss—a man like them—couldn’t possibly have stolen the documents he had or harbored the Soviet sympathies he did (similarly, the British establishment refused, as long as possible, to accept that Kim Philby was a traitor, as Ben McIntyre reminds us in his new book about the Philby affair). It was unthinkable and, therefore, impossible—especially when his accuser was distinctly not “one of us”, but a West Coast provincial of humble, anti-e[a]stablishment origins. Nixon was cast for life as a red-baiter, a demagogue and a character assassin.

For Richard Nixon’s political generation, the Hiss Case was the equivalent of the Dreyfus Affair that rocked the French Third Republic. Captain Dreyfus, an innocent man, but a Jew, was vilified as a traitor while Count Esterhazy—the real spy, a titled aristocrat who “belonged” and, therefore, couldn’t possibly be the culprit—escaped punishment.

Long after Dreyfus was finally vindicated and Esterhazy’s guilt became known, the bitterness remained. Many privileged elitists never forgave the “Dreyfusards” for being right; the political well remained poisoned for at least a generation. So it was with Richard Nixon. By the time I came to work for him in the spring of 1972, the old poison was still coursing through the body politic and many of the establishment politicians and pundits who had cheered John Kennedy and Lyndon Johnson on the way into Vietnam were doing everything they could to prevent Richard Nixon from achieving an honorable exit from a conflict that was neither of his making, nor his choosing. Unfortunately, by 1972 the vitriolic attacks on the White House also had given rise to a siege mentality within.

Nixon, innocent of any foreknowledge of the Watergate break-in, was easily goaded into a “circle the wagons” mode by a handful of aides who were implicated and were intent on saving their own skins. And so the cover-up that would ultimately topple a presidency was born.

Meanwhile, most of us in the White House, from President Nixon on down, tried to keep focused on the business of governance, which included major initiatives on the environment, education, welfare reform, health care, the restoration of sanity and social peace at home, building on the historic opening to Mao’s China, reduction of Cold War tensions, guaranteeing the security of a beleaguered Israel and generally laying the foundations for what actually did turn out to be the “generation of peace” Nixon had always said he sought.

Looking back, I am amazed at how much good was accomplished against such bitter, partisan odds. Perhaps it also explains why the Richard Nixon I met with again in December of 1976 and January of 1977—when I spent a month as one of the writers and former aides assisting him with his memoirs—was the polar opposite of a brooding, embittered exile. With the long ordeal of Watergate and the resignation behind him, Nixon struck me as a man at peace with himself and with a calm, optimistic sense of purpose. In a long, one-on-one conversation in his San Clemente office, he was much more focused on the future than the past as we took a talking rather than walking tour of the world scene and domestic politics.

I have had the privilege of working closely with three presidents: Nixon, Ford and Reagan. Each of them I came to like and admire in different ways; each one entered office at a time of crisis; each one had to tackle massive inherited problems, and each one made a substantial contribution against heavy odds.

But Richard Nixon was the most fascinating and complex of the three, a man who rose from the political dead more than once and lived to attain hard-earned standing as an elder statesman after being driven from office in disgrace. Nothing came easily to him. There were no inherited privileges, none of the superficial charisma that often covers a multitude of sins, and no loyal cadre of establishment cheerleaders to rally public opinion. But it was Richard Nixon and many of the team members he assembled—Henry Kissinger, George Shultz and Patrick Moynihan to name only three, plus scores of less-well-known policy experts and skilled specialists—who would lend intellectual strength and depth to domestic and foreign policy for the rest of the twentieth century and beyond.

And then there were the millions of blue collar, independent and Democratic voters who, for the first time, cast their ballots for a Republican president in 1972. They and their descendants returned to the fold again in 1980 to make the Reagan Revolution possible, just as the “lasting structure for peace” crafted by Richard Nixon made the historic collapse of communism achievable without global conflagration.

Not all that bad for what most historians continue to dismiss as a “failed” presidency.

Aram Bakshian Jr. is a contributing editor to The National Interest and served as an aide to Presidents Nixon, Ford and Reagan. He has written extensively on politics, history and the arts for American and European publications.