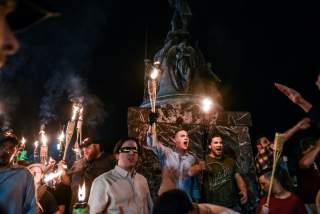 WHEN BRENTON Tarrant gunned down fifty-one worshippers at the Al Noor Mosque and Linwood Islamic Centre in Christchurch, New Zealand, in March, he set off yet another alarm about the danger of terrorism on the right. A copycat attack followed in April, when a man with an AR-15 attacked the Chabad of Poway synagogue in California, murdering one worshipper and wounding several others. Tarrant himself had followed in the footsteps of Robert Bowers, who murdered eleven worshippers at the Tree of Life synagogue in Pittsburgh in October 2018, citing Jewish support for migrants entering the United States. And Bowers followed in the footsteps of Dylan Roof, who slaughtered nine black congregants at the historic Emanuel African Methodist Episcopal Church in Charleston, South Carolina, in 2015. In the United Kingdom, a white supremacist assassinated Jo Cox, a Labour member of parliament who favored migrants—one right-wing group tweeted, “Only 649 MPs to go #WhiteJihad.” Such attacks track with widespread reports that a record number of hate groups are active in the United States and images of mass demonstrations by white nationalists, like those in Charlottesville, Virginia, in 2017, where “Unite the Right” protesters marched en masse and then, the next day, one of the white supremacists drove his car into a crowd of counterprotesters, killing one.

Whether right-wing terrorism is rising or simply getting more media attention is fiercely contested, but its political impact does indeed seem to be growing. In both the United States and Europe, violence on the right intersects with traditional politics and exacerbates political divides, giving it far more influence than it had in the past. In addition, it is increasingly international, drawing on a diverse set of influences, causes and players, including Russia. Events and grievances in Europe or the United States inspire action in other parts of the world and vice-versa, with social media providing the connective tissue among extremists who would otherwise not know of one another. At the same time, however, this movement is inchoate and far from robust. It is internally divided and thrives in part because so little has been done to impede it.

The United States and other countries can exploit right-wing groups’ vulnerabilities and tackle the threat they pose. Many of these measures require treating them in the same fashion as jihadist groups. This would include designating their activities as terrorism, targeting their support structures and using their international connections against them. By reducing right-wing violence, and by also keeping pressure on jihadist groups whose violence feeds the right-wingers, the United States can reduce, though hardly eliminate, this phenomenon.

ASSESSING THE true extent of and the danger posed by right-wing terrorism is difficult. As terrorism expert Bruce Hoffman points out in Inside Terrorism, right-wing groups in Europe have carried out sporadic attacks since the 1970s—in August 1980, neo-Nazis bombed a rail station in Bologna, Italy, during the height of summer holidays, killing eighty-four people. In 1995, Timothy McVeigh, an anti-government extremist, bombed the Alfred P. Murrah Federal Building in Oklahoma City, killing 168 people. No single domestic attack in recent years has reached McVeigh’s bloody toll.

In recent years, hate crimes based on race, ethnicity, gender and religion have increased, but it is hard to know if this is a genuine trend or simply better reporting and collection. In addition, many hate crimes fall below the threshold of being a terrorist act. Data presented by scholar Jacob Aasland Ravndal indicate that despite recent high-profile attacks like those in Pittsburgh and New Zealand, deadly violence may have fallen in both the United States and Western Europe, in part due to the decline of the neo-Nazi movement, which often committed brutal but small-scale attacks on African Americans, immigrants and other targets. The conflation of robberies and other crimes committed by extreme right-wing groups with (violent) acts of terrorism causes another coding problem. In addition, the rise of anti-immigrant parties has allowed a peaceful, if intolerant, path for those who want to stop Muslims or others from entering their countries.

Another problem is that right-wing terrorism as a category is a bit murky. As Hoffman notes, right-wing terrorism has a reputation of “seemingly mindless ‘street’ violence” that targets immigrants and other foreigners in Europe. Moreover, while some favor Nazism or other political ideals, most do not espouse a specific program and prefer vague nationalist and racist slogans. For some it is simply an excuse “for the egocentric pleasure derived from brawling and bombing, preening or parading in 1940s-era Nazi regalia.” European right-wing terrorism is usually secular, while American groups often try to draw on Christianity to justify their action.

Often, right-wing violence is mixed with “domestic” terrorism in a category, to contrast it with international terrorism like that practiced by Al Qaeda. The domestic label, however, can include homegrown jihadis, and of course, some white supremacist groups have international links. In addition, domestic terrorism can include the enemies of right-wing groups, such as the left-wing Antifa as well as animal rights groups and others. Instead, right-wing terrorism should be seen as a label of convenience that lumps together various causes, including white supremacy, anti-LGBTQ movements, gun rights militants and hostility to the federal government. Some of these views are less radical than others and can be expressed in a peaceful manner—they are views that are held in part by millions on the “right” side of the American and European political spectrum in a legitimate way. It is when these ideas are taken together to a fanatical end by an aggressive few that the trouble begins.

The numbers might, however, be much higher than we know. Police in England and Wales recorded an almost 20 percent increase in 2017–2018, and this period is more than twice the figure in 2012–2013. Right-wing violence often stops short of murder, and vandalism, property damage and assault are often underreported. Beyond these factors, in the United States prosecutors often use drug or gun laws to go after domestic extremists suspected of being at risk of using violence because federal law does not designate violent domestic groups as terrorists.

The picture is also muddy in other countries. Russia, which has more right-wing terrorism than any other country, saw a decline in violence in recent years. Violence in Russia, which is primarily directed at migrants from Central Asia and the Caucasus, peaked at the end of the last decade.

What is clearer is that right-wing violence in the West is rising relative to Islamic extremism, the focus of governments since the 9/11 attacks. Over 70 percent of extremist attacks that resulted in fatalities from 2008 to 2017 were committed by right-wing groups, and, in 2018, jihadists killed only one person on U.S. soil, while right-wing violence led to sixteen deaths. A Europol report found the “violent right-wing extremist spectrum is expanding.” Europe saw an increase in arrests related to right-wing violence from 2016 to 2017 even as jihadist terrorism was falling there and becoming less sophisticated, though in Europe in 2017 jihadist attacks and violence were still far more common.

Policymakers are increasingly recognizing this danger. The 2018 U.S. “National Strategy for Counterterrorism” warns of an array of right-wing causes as well as traditional concerns about groups like the Islamic State. Former Department of Homeland Security Secretary Kirstjen Nielsen also sounded the alarm. European intelligence leaders are also warning of a greater threat, and many services are devoting greater resources to the threat of far-right terrorism.

TERRORISM, BY its very nature, is about more than just a body count. Terrorists seek to use violence to spread their message, shape politics and force their adversaries into self-defeating countermeasures. The Islamic State, for example, conducted the 2015 attacks in Paris that killed 130 people as a demonstration of its strength, hoping to punish and intimidate France and other enemies for their intervention in the Syrian Civil War and to attract recruits and funders. In addition, group leaders probably reasoned that a French crackdown at home might further alienate French Muslims and thus “prove” the Islamic State’s arguments that the West is deeply hostile to Islam.

Right-wing violence, although not bloodier than jihadist violence, may have even more political impact. In Europe, and especially in the United States, jihadist sentiment is not linked to mainstream politics. Some European Muslims might favor a caliphate or other radical ideas, but it is not a majority sentiment, even among this minority community. In the United States, such radical jihadist views are even rarer. Right-wing causes, in contrast, touch far deeper political nerves. The organizations are appealing to sentiments embedded in majority communities—in Europe, for example, the Pew Research Center found that majorities in Italy and Poland have unfavorable views of Muslims, and in many countries over 30 percent of the population would not accept a Muslim as a family member (the acceptance of Jews is only slightly higher). Majorities in Europe oppose more immigration. Hostile and vehemently right-wing rhetoric appears to stir up more radical figures in the movement. For example, according to a study by two professors of political science and a graduate student at the University of Texas, counties that hosted Trump rallies saw an over 200 percent jump in hate crimes.