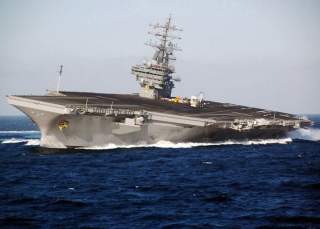 Last week, the defense media broke the news that the Pentagon’s “Air-Sea Battle” concept is being renamed and absorbed into a broader multiservice effort to develop a “Joint Concept for Access and Maneuver in the Global Commons” or JAM-GC. Individual news reports have used a variety of verbs to describe what is happening to Air Sea Battle, but the headline of the first article was also the most blunt. “DoD Kills Air-Sea Battle,” it said—and I fear it might be right. Maybe it is just a name change, but I am concerned that incorporating “the concept formerly known as Air-Sea Battle” into the highly bureaucratic joint concept development process could stifle innovation and dilute the concept’s focus.

If Air-Sea Battle has indeed been killed, it would seem appropriate to mark its passing by reflecting on the life and death of ASB: what it accomplished, what remains to be done, and what we should learn from its fate. Such a eulogy may well be premature. I hope it is, and that the concept’s development will continue and benefit, like Tom Sawyer, from the discussion and debate resulting from the news of its demise. With that objective in mind, I offer my personal thoughts on the concept below.

It is difficult to eulogize Air-Sea Battle because if there is one thing that most observers can agree upon regarding Air-Sea Battle, it is that “the concept” has always been poorly understood. But one thing that most versions of ASB have had in common is an explicit focus on overcoming anti-access/area-denial (A2/AD) challenges, and an implicit focus on the pacing threat posed by China’s rapid development of extensive A2/AD capabilities. In my view, Air-Sea Battle’s first and most significant accomplishment was in calling attention to these A2/AD challenges and, in particular, the increasingly dire need to offset the remarkable growth in China’s military power and stabilize the deteriorating military balance in Asia.

The first step to recovery is admitting that you have a problem, as they say, and Air-Sea Battle came as badly needed intervention at a critical point. It is hard to believe today that less than a decade ago, these issues did not appear on most defense policy makers’ radar as major planning considerations. But at the birth of Air-Sea Battle, “China” truly was what two U.S. Naval War College professors called “the Voldemort of U.S. military planning”—he who must not be named—and both the Air Force and Navy were focused on irregular warfare, as well as supporting the ongoing conflicts in Southwest Asia. The fact that the strategic community now finds itself debating the right way to respond to the challenges posed by A2/AD and China’s growing military capabilities and not whether or not those challenges even exist or deserve our attention is a testament to Air-Sea Battle’s success in changing the debate and to its enduring significance.

Whatever happens to the erstwhile Air-Sea Battle, the Department of Defense must not turn back the clock and return to complacency on A2/AD and the deteriorating military balance in Asia. The challenges ASB was intended to address have only solidified over the course of the concept’s brief life. China remains the pacing threat, but it is not the only competitor seeking to deny our power-projection forces freedom of maneuver and action. At the same time, a new type of challenge has arisen in the form of “creeping” or “gray-zone” aggression, whether by “little green men” in the Crimea or paramilitary vessels in the East China Sea. It may be tempting to view these challenges as distinct and separate from A2/AD and the “big war” that many observers associated with ASB. But in reality, the challenges are linked, with creeping aggressors feeling emboldened by the escalation dominance they enjoy in areas covered by their A2/AD capabilities.

It is therefore imperative that the Department of Defense sustain its intellectual, organizational and material efforts to counter and overcome A2/AD—whatever the moniker attached to them. These efforts should include the familiar tenets of ASB: sustaining operations inside the A2/AD “threat bubble,” bolstering the capability and resilience of our allies and partners on the front lines, waging C4ISR network battles, fighting from range and holding out the possibility of peripheral operations such as a distant blockade. The Pentagon and the strategic-studies community can and should debate the appropriate mixture of these elements, but all four are needed, and their combination and application must be guided by overarching strategies and operational concepts.

DoD can call these strategies and concepts whatever it desires, but words do matter, and the Pentagon should not underestimate the importance of speaking in plain terms to the broader public and civilian policy makers. Samuel Huntington argued decades ago that unless each Service articulated a “well defined strategic concept, the public and the political leaders will be confused as to the role of the service, uncertain as to the necessity of its existence and apathetic or hostile to the claims made by the service upon the resources of society.” Joint initiatives are in even greater need of a clear, compelling story about what resources they require and why, since they often compete with individual services’ own priorities. Air-Sea Battle told such a story in a way that helped civilian policy makers understand and provide what the Air Force and Navy needed to address the evolving A2/AD challenge.

I am hopeful that the JAM-GC will continue to fulfill this important function. I also am hopeful that expanding ASB into a fully joint concept under Joint Staff supervision will encourage the Army and Marine Corps to take a fresh look at A2/AD challenges and the novel and expanded roles that ground forces with cross-domain capabilities could play in mitigating them. But full, four-service jointness should not be prioritized at the expense of focus and innovation. Although Goldwater-Nichols and the quest for jointness have greatly improved the effectiveness of our military, they have also spawned what Bryan McGrath has described as “bureaucratic approaches to force structure and strategy that value consensus and collegiality over… assessing coherent risks and thinking strategically.”

Along with many others, I will be watching to see how “the concept formerly known as Air Sea Battle” fares in this environment. If it is turned into another purple booklet of little use to either the warfighter or the policy maker, it will reinforce my belief that substantial changes in the way we are organized to develop and execute national-security strategy are needed.