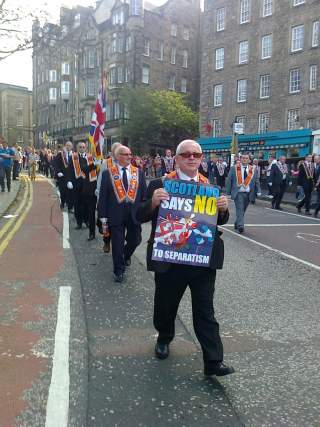 The response of the London parties to opinion polls released last weekend, showing the pro-independence “Yes” side ahead for the first time in the looming Scottish referendum, was a panicky one. Even more powers were announced for the autonomous Scottish Parliament. On Wednesday, normal political business at Westminster was abandoned and the main political leaders headed north to act as persuaders for the Union. David Cameron gave a moving speech in Edinburgh. But there was more than a whiff of a cornered Bourbon monarch frantically improvising in a bid to head off an inflamed mob.

It is now hard to recall that just one month ago, the dreams of glory of Scotland’s ruling Scottish National Party (SNP) appeared to be in shreds. In the first of two debates with his chief pro-Union rival Alistair Darling, the normally formidable SNP leader Alex Salmond gave a halting performance. As a separatist, he sounded bizarre when he insisted that “We will take the pound as it belongs to Scotland as much as England, it's our pound!” For Salmond, the British currency was an asset, rather than a means of exchange. He insisted on clinging to it, even though it meant ceding control of financial policy to the state that he was desperate to break away from. In polls and pronouncements, the British people and leaders of all the main parties had declared outright opposition. Yet, Salmond insisted on plowing ahead. He threatened (and still threatens) to renege on Scotland’s share of Britain’s national debt, unless his opponents embrace his quixotic financial union. This would freeze Scotland out of capital markets with stark consequences for the personal finances of probably most of its citizens.

Salmond was generally judged to have lost badly in the August 5 debate. His side was thirteen percentage points behind pro–status quo “Better Together.” But instead of collapsing, his poll figures rose and they went through the roof following the second debate held on August 25 when Salmond offered a performance of undistilled populism. Before a heavily partisan audience and brushing aside an inept moderator, he virtually took charge of the debate. He insisted that the state health service was in danger of being privatized even though his own government controlled every aspect of it under the 1999 settlement, which had transferred a whole range of powers to the Edinburgh parliament formed in that year. Darling, along with numerous viewers was clearly horrified that the BBC had mismanaged such a crucial encounter. The questioning from the audience was overwhelmingly hostile, and he clung grimly to his speakers lectern as Salmond strode the debating stage as if he owned it.

Salmond’s great feat in these decisive weeks has been to neutralize the fear factor. To business chiefs with investments in Scotland and apprehensive national leaders from as far away as Australia and Canada, he appears to be a lord of misrule. His vision of a state-dominated economy in a country currently dependent on an economic lifeline from the rest of the UK, is unappealing. The fact that he doesn’t appear to care that the currency his new state will have is still very much a mystery, is even more unsettling.

Yet, polls showed that a growing number of Scots were at ease with Salmond’s Panglossian optimism. In large numbers and for many months, evangelical campaigners have been systematically working Scotland’s streets, spreading a message of relentless optimism—the people of Scotland are capable of meeting and confronting any challenge that is thrown at them because of the strength of their capabilities.

Britain is depicted as an obsolete and failing country. But currently, the British economy, one with which Scotland is totally intertwined, ranks sixth in the world GDP league. Presuming that a 300-year union could be smoothly unpicked and that there would be no serious investment flight, an independent Scotland would be 42nd in world GDP rankings. One of the world’ s most extensive public sectors would need to be financed from a tax base of under 4 million people instead of the present 52 million.

In Salmond’s virtual reality, the rest of the world will fall into line and smooth Scotland’s path to statehood. There is no inkling that leaders who fear the eruption of a eurozone-style financial crisis in Britain due to a run on assets and deposits in Scotland might instead seek to deter or even punish a Scotland seen to be in a grip of destructive hubris at a time when the world economy is still in intensive care.

It is not an analogy that the pro-Palestinian Salmond might enjoy, but probably not since the formation of the state of Israel in 1948 has such positivity gripped the architects of a would-be new state. Israel was taking shape in the wake of peculiarly terrible circumstances for the Jewish people. Scots, by contrast, have been part of one of the most successful economic and political unions in modern history. It has usually been marked by peace and prosperity. At hardly any other time have Scottish living standards been as high as they are now.

To the incredulity of the Chinese leadership and many others with restive minorities, London voluntarily ceded a referendum on independence to the Scots. Indeed, the wording of the question on the ballot paper, the amazing duration of the campaign and the fact that 750,000 Scots living elsewhere in the UK will have no vote, while recently arrived immigrants can vote indicates a reasonableness on the part of a London elite that some might describe as suicidal. For the Canadian thinker and former politician Michael Ignatieff, secessionism in such circumstances “is the worst sin in politics.”

Scots are now divided into two perhaps nearly equal camps. There are realists who are aware of the benefits which the country derives from the Union and who fear that these could vanish in an impetuous and poorly planned rush for statehood based on emotion and what many see as one supremely talented politician’s will to power. They are horrified when the leader of what is still only a regional government turns around to the leader of Australia, a country substantially built by Scots, and brands him as “foolish” and “hypocritical” for daring to make public his fears about the course Scotland may be on.

These Scots are not confined to any one class, but they are more likely to be middle class than working class, they often are religious, they rely on the state for a limited number of needs and may have obtained a solid education, which has given them a long-term perspective. They fit the global stereotype of the Scots that existed for several hundreds of years until the eruption of Alex Salmond on the north British scene.

By contrast, there are new Scots who are the children of the post-industrial, consumer-orientated and increasingly secular Scotland. They are unlikely to be involved in civic initiatives and receive much of their information from the social media where the “Yes” side has shown impressive flair. They often look to celebrities from the entertainment world (overwhelmingly pro-independence) for a lead even on political issues. Rather than recoil from increasingly overt bids by Salmond to equate his cause with that of the entire nation, they admire his chutzpah.

A lot of these present-orientated, often lightly educated and economically underactive Scots have a sense of entitlement which they believe a populist movement like the SNP is likelier to nurture than the conventional parties. Many, particularly on Clydeside, are steeped in a grievance culture which has class and ethnic targets: the Conservatives Party and the English who back the Tories far more than the Scots as a whole.

Salmond’s new followers have mainly transferred from the paternalistic and drab Labour Party. Many are determinedly parochial. They refuse to concede the risks of living in a tough and unequal globalized world in which Scottish welfarism is an exotic anomaly. The fate of millions of unemployed Greeks, Spaniards and Italians who got ensnared in the wrong currency union, appears to be of no relevance to them. In reflective moments, some will concede that in following Salmond they are behaving recklessly. But the culture of risk that has been fashionable in a hedonistic Scottish society for several decades, indicates that it is the cool thing to do.

The relentlessly positivity defining the “Yes” campaign is the brainchild of a savvy public-relations expert, Stephen Noon, who transferred to Salmond’s cause after working as a close aide of the head of the Catholic Church in England. Salmond insisted to Australia’s prime minister Abbott that the campaign was a “model of democratic conduct.” But away from the briefings for the world’s media , there is another side to the “Yes” campaign.

Intimidation has increasingly marked it. Pro-Union placards have been systematically vandalized across Scotland. Numerous cars with “Better Together” stickers have been damaged. Mobs have even attempted to halt the tour of Scotland’s streets by Jim Murphy MP, one of the few stars of the No campaign; and the social media has been full of bile that appears to be coming disproportionately from one direction.