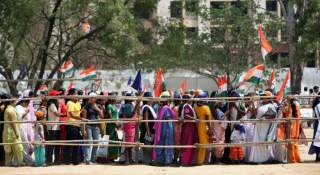 Is the party over for the Indian National Congress Party? On October 19, Congress received another jolt in what has arguably been its worst year since its founding in British India in 1885. The right-of-center Bharatiya Janata Party (BJP) turfed out Congress governments in two of India’s most prosperous states: Maharashtra in the west (home to India’s financial capital, Mumbai), and Haryana in the north, a bubbling hub of outsourcing and overpriced real estate bordering Delhi. Both states have long been regarded as Congress strongholds, but in terms of seats in their legislatures—India follows a parliamentary system at both the federal and state levels—the party has slipped to third place.

These setbacks follow the mauling Congress suffered at the hands of the BJP in national elections in May. After running India at the head of a coalition for the past decade, Congress now controls less than one-tenth of the seats in the powerful lower house of Parliament. Last week’s losses mean it now runs only one of India’s ten biggest states. (Karnataka in the south.) A battery of critics has all but written off the party’s lackluster heir apparent, Congress Vice President Rahul Gandhi, the son, grandson and great-grandson of former prime ministers. Meanwhile, in BJP Prime Minister Narendra Modi, Congress faces its fiercest foe to date: a charismatic leader who has vowed to wipe the party off India’s political map. If a string of electoral losses are a barometer, the party’s economic ideas, heavy on subsidies and handouts for the rural poor, appear to have lost favor with the country’s young and rapidly urbanizing population.

Add up all this bad news for Congress and it may be time to start thinking about the once unthinkable: a political landscape where India’s oldest party counts for precious little. Foes of the party insist that this is just what India needs. Without the Nehru-Gandhi dynasty—virtually synonymous with the party since 1969, when Indira Gandhi led a band of loyalists out of the original Congress that helped India win independence from Britain some two decades earlier—Indian politics will likely become less feudal and more meritocratic. And Asia’s third largest economy may finally junk the last vestiges of the Nehruvian socialism that helped keep it poor, and the foreign-policy doctrine of nonalignment that placed it at odds with its natural allies in the democratic West.

Congress supporters, of course, have good reason to bemoan their party’s possible eclipse. Without a strong left-of-center check on the BJP, their argument goes, India may evolve into a majoritarian democracy where dissent is quashed and non-Hindus are expected to know their place. Though Modi campaigned on a plank of economic development and national pride, the BJP, with its roots in the Hindu-nationalist Rashtriya Swayamsevak Sangh (National Volunteer Corps), remains an object of suspicion for many Indian liberals.

Historically, the RSS has paid more attention to hot-button cultural issues such as banning cow slaughter and rebuilding temples on what it sees as Hindu holy sites taken over by medieval Muslim invaders, than to the bread-and-butter issues of job creation and inflation-fighting on which Modi campaigned. The prime minister, like many senior leaders in his party, began his career in public life as an RSS worker before crossing over to the BJP in the 1980s.

For Congress, the existential quality to what may otherwise have been dismissed as a cyclical downturn—the party has lost before, though never quite this badly—can be traced directly to the dwindling fortunes of the Nehru-Gandhi dynasty that has long dominated Indian politics. Until now, three Nehru-Gandhis have served as prime minister: Jawaharlal Nehru (1947-64), his daughter Indira Gandhi (1966-77 and 1980-84) and her son Rajiv Gandhi (1984-89). Five family members have led the party, including Rajiv’s Italian-born widow Sonia Gandhi, who took over as party president sixteen years ago and has led Congress continuously since then. Though Mrs. Gandhi, faced with criticism of her foreign origins, did not serve as prime minister, she was widely acknowledged as the most powerful person in India during the decade-long tenure (2004-2014) of her handpicked choice for the job, the technocrat Manmohan Singh.

Until about two years ago, it appeared all but certain that forty-four-year-old Rahul Gandhi (Rajiv and Sonia’s son), a former management consultant, would eventually ascend to the prime minister’s office like his forebears. But things have not unfolded according to script. Widely seen as lacking purpose, the Gandhi scion shows few signs of connecting with ordinary voters, or even of treating politics as a full-time job. Since 2010, he has led Congress to a series of humiliating defeats in important state elections, as well as in national elections this year. Meanwhile, Gandhi’s grand project to revitalize his party from the ground up, by choosing leaders through elections rather than from above by party bosses, has little to show for a decade of effort.

Some Congress leaders believe that Gandhi’s younger sister, forty-two-year-old Priyanka Gandhi Vadra, has inherited her grandmother Indira’s looks and charisma, and can turn around the party’s fortunes. But Vadra is largely untested as a campaigner, and thanks to a series of dodgy land deals by her businessman husband, Robert Vadra, the younger Gandhi sibling carries baggage of her own. Moreover, the very fact that Vadra, who has never run in an election, is held up as the party’s putative savior sums up Congress’ predicament. The party that led India to independence from the British has been reduced to dependence on a single family.

To be sure, reports of Congress’ death have been greatly exaggerated before. Pundits wrote off the party after crushing defeats in 1977 and 1999, only to be proven wrong by the Nehru-Gandhi dynasty’s ability to bounce back from adversity. If this year’s losses mostly reflect dissatisfaction with Singh’s two terms in office—the second of which was marked by both sharply slowed economic growth and staggering corruption scandals—then perhaps another comeback is in the cards. Even in its darkest hour this May, Congress managed to draw nearly 20 percent of the national vote, or about 100 million voters. The BJP won only 12 percent more of the vote than Congress but snagged more than six times as many seats in Parliament.

Whether you slice the data by class or caste, Congress has lost ground to the BJP among all segments of Hindus, who make up about 80 percent of the population. But Congress remains much more popular than its rival among the nearly one in five Indians who are either Muslim or Christian. Thanks to decades of family rule over what was for all intents and purposes a one-party socialist state, the name Nehru or Gandhi adorns countless airports, universities, government buildings and welfare programs. This bounty of taxpayer-funded advertising ensures that name recognition will never be a problem for either Rahul or Priyanka. (Not all Indians are even aware that the Nehru-Gandhis are not related to Mahatma Gandhi, who led India’s independence struggle. Indira Gandhi acquired the talismanic last name through marriage to a Zoroastrian journalist.)

Moreover, crystal-ball gazing about Indian politics is fraught with peril. Five years ago, in the wake of back-to-back defeats in national elections, the BJP looked similarly rudderless and fundamentally unsuited for national office. Prognostication about Congress’ demise may prove premature.

These caveats notwithstanding, the evidence suggests that this time Congress may indeed be in terminal decline. For starters, the party’s meager share of seats in Parliament’s directly elected lower house—just forty-four out of 543—is less than half of its previous low of 114 seats in 1999, and below the 10 percent threshold needed to officially claim leadership of the opposition. The party currently controls, alone or in a coalition, only eleven of India’s thirty-one states, accounting for just 16 percent of the country’s $1.8 trillion gross domestic product, and a similar proportion of its 1.2 billion people.

After this month’s losses, only one of India’s twenty largest cities (Bangalore) is in a Congress-ruled state. In the murky world of Indian campaign contributions, nobody can place an exact figure on the financial hit Congress will take from losing wealthy Maharashtra and Haryana. But the impact—particularly the loss of Mumbai—may well be crippling. Moreover, in much of India, the prospects of a Congress comeback appear slim. As the Indian journalist Shankkar Aiyar points out, it has been about a quarter century since Congress last held power in the populous Hindi heartland states of Uttar Pradesh and Bihar. In Tamil Nadu in the south, and West Bengal on the border with Bangladesh, it has been even longer.

Meanwhile, the BJP, propelled by the charismatic Modi, has never looked harder to beat. In May, it won the first single-party majority in Parliament in thirty years. Its most recent victories mean that it holds or shares power in states that account for 41 percent of India’s GDP and about a third of its population. Of India’s twenty largest cities, eleven are now in BJP-ruled states. For now at least, Modi’s promise of economic renewal through growth appears to resonate better with voters than Congress’ 1970s style emphasis on handouts, known in party parlance as “rights-based development.” Modi’s personal story—his rise from selling tea at a railway station platform to the prime minister’s office—only accentuates criticism of Rahul Gandhi as effete and out of touch with the masses.