The Ripple Effect from Reagan's 'Economic War' on the USSR 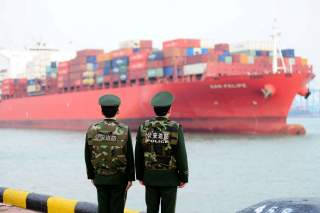 Many Americans are in a tizzy over President Donald Trump’s apparent fondness for tariffs. American farmers, for example, have taken an enormous hit, while cultivators in other parts of the world, from Brazil to Russia, are celebrating their good fortune. Economists are almost universally against the current administration’s approach. But what of specialists in geopolitics?

It turns out that one leading Washington strategist, Edward Luttwak of the Center for Strategic and International Studies, laid out a plan for economic warfare against China some years ago in his book The Rise of China vs. the Logic of Strategy. He wrote, “It is obvious that if China’s military growth can no longer be effectively negated, the only remaining alternative to subjection would be to impede China’s economic growth, and in sufficient degree to preserve a tolerable balance of power.” Luttwak advised restricting markets from Chinese exporters, interrupting the supply of raw materials to China, and breaking all means of technology transfer to China.

He fears that the United States may have already “passed the tipping point marking the advent of China’s economic hegemony.” Yet he closed his book on this point: “On the other hand, if geo-economic action were to begin in good time, its limited aim of impeding China’s economic growth in some degree—say from 8 percent per annum to 4 percent per annum— . . . would . . . severely limit the retaliatory options of the Chinese government.” Only now, seven years after the publication of this book, is it wholly commonplace for strategists to argue in favor of the trade war with China on national security grounds.

Beijing has hardly been oblivious to this American strategic discourse and has been rather busy attempting to understand its true nature. As part of that attempt, a Chinese researcher, Fu Ruihong [付瑞红], has adopted a comparative historical methodology and published a detailed examination of President Ronald Reagan’s “economic war” against the USSR during the 1980s. The paper is not only published in an academic journal of the Chinese Academy of Social Sciences (CASS), but it has a CASS funding grant number as well, implying its importance. Moreover, the study makes ample use of American scholarly research on this subject, including such academic luminaries as Samuel Huntington, Bruce Jentleson, Michael Mastanduno, and Richard Pipes. The researcher suggests that there are definite echoes of this American Cold War strategy in Washington’s current approach toward Beijing. Despite the evident collapse of the USSR, Fu finds that the Reagan-era policy was full of “contradictions and compromises [冲突和妥协],” so that the policy “lacked the strength [力不足]” to achieve the intended results.

Explaining the intellectual and strategic context of the Reagan administration policy, the Chinese researcher understands that the U.S. president viewed the Soviet Union as the “enemy [敌人],” even constituting “an evil empire [邪恶帝国].” Fu notes the Reagan administration’s conclusion that to deter the Soviet Union was viewed as insufficient, but rather the United States then sought “economic tools to attack the USSR, forcing the Soviet Union to recognize that its ability to compete over the long term militarily with the U.S. was insufficient.” Thus, Reagan’s “economic warfare [经济战]” aimed to “use offensive and destructive economic means to destroy the Soviet economy and financial structure in order to weaken its military power [用进攻性和破坏性的经济手段破坏苏联经济和金融体系而最总限制和弱化其军事能力].”

The article does suggest that President Jimmy Carter had actually taken many steps to sanction and restrict trade with the USSR, for example in high-tech products, after the Soviet invasion of Afghanistan in December 1979. According to this Chinese study, the Reagan administration wanted to go much further, targeting the Kremlin’s perceived dependence on oil and gas revenue to pay for needed grain imports. In an accusation with echoes for today’s U.S.-China rivalry, Fu observes that CIA reports then asserted that hundreds of thousands of unofficial documents were stolen every year, even as “foreign students obtain applicable technologies, since roughly 2,000 Soviet and East European nationals entered the U.S. each year for non-tourist travel [留学生获取应用领域的技术每年大约有2,000名苏联和东欧人以非旅行身份进入美国].” Still, “energy technology and equipment” was to be the heart of the new sanctions program.

Yet, when all is said and done, Fu concludes that there is “no simple answer” regarding the impact of this Reagan-era program to undermine the Soviet economy. It is noted that the Reagan administration’s policies were beset with internal contradictions. Logically, for example, the agricultural lobby fought bitterly to preserve U.S. grain sales to the USSR. The State Department apparently opposed the more hardline approach advocated by the Defense Department and CIA, according to this rendering. They argued that the United States would not gain the support of its allies and this assessment apparently proved quite prescient. Fu cites, for example, notes from a trip by Secretary of State Alexander Haig from a January 1982 visit to Europe, where he encountered the sense that Germany and France could not retreat from their commitments to link up energy routes with the USSR. The Chinese analyst concludes: “allies just did not view the Soviet Union as an extremely urgent threat and were unwilling to pay a price for sanctions [盟友并不认为苏联的威胁是迫在眉睫不愿意承担经济制裁的代价].” He describes significant energy infrastructure sales, for example by Italy, that went ahead in contravention of U.S. sanctions. Fu maintains that “the behavior of U.S. allies did not change fundamentally.”

This Chinese analysis does make at least two points that are somewhat disturbing. It is rather casually mentioned that Reagan may have approved covert sabotage operations against Soviet energy infrastructure. That would be taking economic warfare to a new level in the current context, for sure. Another issue that arises, and could be relevant to the evolving trade war with China, is Fu’s observation that the USSR apparently did not adopt “counter-attack measures [反击措施]” in the economic realm.

There is no attempt to actually gauge the importance of all the many factors that led to the collapse of the USSR in 1991. However, Fu notes that a CIA report concluded that the impact of Western economic pressure was minimal, and that “the Soviet Union’s economic problems derived mainly from internal sources [苏联的经济问题主要源自国内].” Perhaps it would be too much to ask a mainland Chinese researcher to openly state that Soviet Communism proved a rather dismal failure from an economic point of view, and Fu does not say this explicitly, but one can read it between the lines, of course. Falling oil prices, as well as expensive Soviet commitments in far-flung lands like Afghanistan are also mentioned as having major deleterious consequences for the USSR economy. While allowing that American economic pressure might have had some impact on markets, as well as prevailing attitudes generally—“psychological pressure”—the Chinese analysis generally concludes that for Reagan’s economic warfare the subsequent collapse of the USSR proved “quite fortuitous [有一定的偶然性],” yet defies direct causation.

Fu’s research concludes that the trade war goes far beyond the economic realm, and Fu contends this must be fully understood by the Chinese. As the tensions are broader and pertain to national security, they are not likely to be resolved and “the pressure will gradually increase,” although the United States will also face pressure and contradictions. China, Fu asserts, must “maintain strategic self-confidence and appraise the situation in a sober manner.” He says Beijing can have confidence for two basic reasons. First, the U.S. “economic war” against China amounts in most respects to “bluff and bluster [虚长声势].” Second, contemporary China’s global economic integration, size, and influence far exceed the USSR of the 1980s.

I have traveled to China over the past two decades, covered nearly all regions of the vast country, and am inclined to agree with Fu on that last point. While China does not want this trade war, one can surmise that it has been earnestly preparing for it for decades by indigenizing advanced research and tapping into underdeveloped markets worldwide.

One might hope that the United States has also done its homework to prepare for such a trade war and the “great decoupling” that now seems to be in the works. Unfortunately, there appears to be almost zero research that undergirds this obvious leap of faith. Perhaps the U.S.-China trade war will have an analogous impact on the United States as Brexit has had on the UK: spreading political and financial dysfunction, making trade lawyers rich, while simultaneously impoverishing the rest of society, as it sinks into ever greater isolation and paranoia.