The Rise of Matt Gaetz 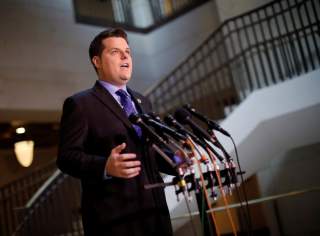 There are two types of stars in Trumpworld: those who were with the president in the early goings—when the ultimate political ascension of the New York wheeler-dealer was considered a fanciful notion—and those who reached the inner sanctum after his victory.

Group one, for better and worse, is replete with household names—Roger Stone, and his campaign chiefs Corey Lewandowski, Paul Manafort and Steve Bannon. Group two is also a mixed bag. Archetypical are the president’s selections for secretary of state: Rex Tillerson, who he hired after one interview, and Mike Pompeo, who ruthlessly ascended to Langley and Foggy Bottom after hastily developing a relationship with the then-president-elect in late 2016.

Starved of a talent pool to draw on—with establishment conservatives still, more often than not, distrusting this president and the infrastructure of the new nationalism still in its infancy—the administration has hired the willing and not always able. But this dynamic has buoyed the fortunes of a group three: the shadow cabinet, a brain trust—heavy on Fox News grandees—that the president and some in his team informally rely on, whether in direct conversation or via Trump’s insatiable television diet. Some have stepped out of the shadows, such as Lawrence Kudlow, the president’s economic pointman, and John Bolton, the national security advisor.

Congressman Matt Gaetz of Florida is in group three. A former senior administration official described him to me simply as the “instrument.” Gaetz is only in his second, two-year term and is on the sunny side of forty, but the populist from Pensacola carries himself with the confidence of the fraternity president his aesthetics imply he once was. When we spoke last year, he seemed at ease in a Washington remade by Donald Trump. This is a rarity among the conservative rank-and-file, who, four years into Trump’s dominance of the party, are still anything but at ease. Power abhors a vacuum—and deft operators like Gaetz are filling it. He’s made a splash. The New York Times last month reported: “Matt Gaetz Is a Congressman Liberals Love to Loathe. It’s All Part of the Plan.”

Gaetz is a comrade of Florida’s formidable new governor, Ron DeSantis, another ally of this White House and fan favorite on the populist right. And he’s tight with Fox—racking up clips on the network with gusto. But Gaetz isn’t just interested in power—he apparently wants to wield it.

Unlike many of his careful—and anonymous—colleagues in the lower chamber, Gaetz takes risks, his haters and devotees both concede. Just ask Michael Cohen.

Gaetz is in the process of three major gambles.

The first is bucking the administration line on Yemen—and joining a plucky, bipartisan band of outlaws on the Hill who are more suspicious of Saudi Arabia and want to end U.S. sponsorship of Mohammed bin Salman’s troubled crusade. The difference between Gaetz—and Democrats Ro Khanna and Bernie Sanders—is that he actually has the White House’s ear. Several sources familiar with the matter tell me that he directly lobbied the administration to pass on vetoing the latest resolution urging extrication. He failed—for now. If Trump is compelled to eventually withdraw support, it will have been in no small part because of Gaetz.

Gaetz’s second wager is on his aides. The provocative hiring of former White House speechwriter Darren Beattie was denounced on the liberal journalism circuit this week. But Gaetz and his allies want Beattie’s political rehabilitation to be a line in the sand. “I was shocked what happened to Darren, the cruelty and unfairness of it,” Fox host Tucker Carlson told me, in reference to his August firing for his pre-administration participation in a 2016 political conference attended by white nationalists and held by the H.L. Mencken Club. “His crime was being seen in the same room as people Media Matters doesn’t like. For that, he lost his job and his reputation, and faced the worst kind of slander from the dumbest, most aggressive people. It was horrifying to watch.” Beattie’s former White House colleague Michael Anton, the former National Security Council spokesman, told me: “What I've learned from many conversations with Darren is that he is exactly the kind of unconventional thinker we need to help lead conservatism out of the ditch and return American politics to its proper focus.” Former White House chief strategist Steve Bannon told me, simply: “Love that guy. Putting him on the faculty for the Academy of the Judeo-Christian West.”

And Gaetz’s third bet is that in America’s Trumpified politics, never be unbowed. He is weighing an audacious move across state lines—to Alabama. He has the support of the president’s allies. The right thirsts to retake the Senate seat surrendered by Roy Moore two years ago.

They think they’ve found their man.

Curt Mills is the foreign-affairs reporter at the National Interest.