Rise of the Rohingya: How Refugees Can Survive the Genocide in Myanmar 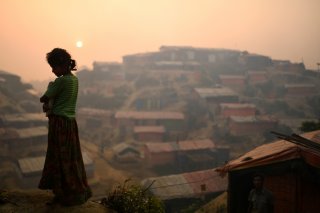 From the coronavirus to cyclones, few have faced the litany of scourges confronting the Rohingya people today. While we must assist the Rohingya to weather these storms, we cannot forget why they find themselves in such vulnerable circumstances in the first place. Almost three years ago, the Myanmar government unleashed a campaign of violence forcing the majority of the Rohingya population to flee. Now is the time to call these crimes what they are: genocide. The failure of the United States and other governments to do so impedes both accountability efforts for past crimes and solutions to current challenges.

In the span of a few days in May, nearly one million Rohingya refugees living in mega camps in Bangladesh faced the arrival of the coronavirus and the strongest storm ever recorded in the Bay of Bengal. The coming monsoon season threatens flooding and landslides. Hundreds more Rohingya are stranded at sea after being turned back from the shores of Malaysia and Bangladesh. Many are feared to have drowned.

This is the result of decades of persecution and the Myanmar military’s campaign of murder, mass rape, and destruction in late 2017. This Tuesday will mark three years since that mass expulsion. As these anniversaries accumulate, there is a real danger that the international community will grow accustomed to their passing. These atrocities cannot become just another chapter in the long history of state violence in Myanmar. Genocide is the gravest crime a government can commit. Accountability for that crime is essential if the Rohingya are to ever feel safe in their homeland.

The U.S. government has called Myanmar’s attacks on the Rohingya ethnic cleansing and documented a series of abuses it describes as “well-planned and coordinated” and “extreme, large-scale, widespread, and seemingly geared toward both terrorizing the population and driving out the Rohingya residents.” Yet, it has fallen short of calling these abuses “crimes against humanity” and “genocide.”

Genocide is defined in international law as the “intent to destroy, in whole or in part, a national, ethnical, racial or religious group” through certain specified acts. The State Department’s own survey establishes that several of these acts—including killing and causing serious mental and bodily harm—have been committed against the Rohingya. The intent to destroy has been amply shown through the actions and statements of the Myanmar military. This evidence has led several independent organizations, including our own, along with a UN fact-finding mission and the legal group the State Department engaged to investigate the atrocities, to conclude that these abuses do indeed amount to this most serious of crimes.

The Rohingya are clear about what has happened to them. As a refugee grandfather said earlier this year, “We know this is genocide. How many more generations need to suffer? What more evidence does the world need?” He wanted to know what is being done to allow him to return home safely.

Hundreds of Rohingya refugees over the last few years, including amid the mass exodus in 2017, have recanted harrowing stories and repeated pleas for justice. They have expressed a desire to return home. Meanwhile, reports of new abuses of Rohingya and other minorities in Myanmar continue to surface.

The hard truth is that conditions in Myanmar have not improved. An ongoing conflict with the ethnic Rakhine, neighbors to the Rohingya, recently resulted in some two hundred burned buildings and further death and displacement of civilians. Access for UN and humanitarian organizations remains limited. Internet blackouts also remain for some one million people in Rakhine state. All this is happening as the threat of coronavirus looms.

Calling what happened to the Rohingya “genocide” is not simply a matter of semantics. A formal designation would help accomplish a series of goals. First, it would bolster accountability efforts, like that before the International Court of Justice (ICJ) and the universal jurisdiction case introduced in Argentina by the Burmese Rohingya Organization UK. Second, it would bring global attention that could help prevent further atrocities. Third, a designation would help rally international pressure, including additional multilateral targeted sanctions. Aung San Suu Kyi’s appearance before the ICJ last December demonstrated that Myanmar’s leaders care and are concerned about international pressure. Finally, it would signal solidarity with the countries hosting Rohingya refugees, with refugees themselves, and with Rohingya still in Myanmar.

The United States has led the world in providing humanitarian aid and in supporting Bangladesh in hosting Rohingya refugees. But it has fallen short in addressing the root causes of the Rohingya’s circumstances. What happened to the Rohingya are crimes against humanity and genocide. Using the words that fit the crimes will not, in of itself, guarantee a brighter future for the Rohingya. But it is the strongest single step that the world can take now to ensure the Rohingya are not forgotten.