The Road to Peace in Venezuela Goes Through Havana 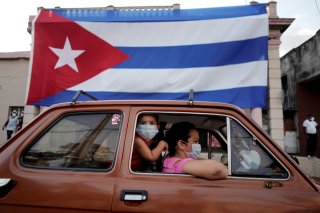 Recent developments may portend an exit from Venezuela’s political stalemate and humanitarian disaster, but to navigate the difficult path ahead the Biden administration is going to need help from Cuba.

In early May, Venezuela’s pro-government Congress named a new five-member National Electoral Council that includes two opposition figures, a development that opposition leader Henrique Capriles hailed as “a first indispensable step” toward free and fair elections. Shortly thereafter, Juan Guaidó, who the United States recognized as interim president after Nicolás Maduro’s fraudulent victory in the 2018 presidential elections, abandoned his opposition to dialogue with the government. Not only did Guaidó agree to negotiations, but he also endorsed a gradual lifting of international sanctions “to save Venezuela.” Maduro quickly responded that Guaidó was welcome to join the discussions already underway with Capriles.

On June 25, the United States, Canada, and European Union issued a joint statement endorsing the budding dialogue and promising “to review sanctions policies” if negotiations toward free and fair elections make progress. That represents a major change from the Trump administration’s strategy of forcibly overthrowing Maduro by imposing economic sanctions and fomenting a military coup. Trump’s team actively opposed a negotiated settlement; in August 2019, they scuttled Norway’s attempt to broker negotiations between the government and opposition by imposing new sanctions just as the talks began making progress.

Given the animosity and distrust between Maduro and the opposition, broad support from the international community—including Cuba—will be needed to reach an agreement. By conservative estimates, several hundred Cuban security advisers help guard the Venezuelan government against internal threats. As a close ally, Cuba will have more influence than anyone over Maduro’s willingness to accept a political settlement.

Moreover, Havana has interests of its own at stake. Cuba still receives about fifty-five thousand barrels per day of oil from Venezuela at subsidized prices in exchange for the services of Cuba medical personnel—oil that is essential for the economy in the midst of Cuba’s current recession due to the coronavirus pandemic and the Trump administration’s economic sanctions.

Securing Cuba’s support for a Venezuelan settlement will be far more difficult so long as the Biden administration continues Trump’s sanctions—sanctions Biden condemned during the presidential campaign, but so far has done nothing to remove.

Cuba can play a constructive role in Venezuela under the right conditions. Havana initially spurned U.S. and Mexico’s entreaties to push Maduro toward negotiations. But that changed in 2018 as the humanitarian crisis deepened, and since then, Cuba has offered to play a constructive role in reaching a settlement if the United States shows a parallel commitment. In 2019, Cuba hosted the initial conversations between the Maduro government and the opposition.

Cuba has a good track record of helping resolve conflicts at the negotiating table. Havana contributed to the talks that ended the war between Angola and South Africa in the 1980s, reassuring a reluctant Angolan government to accept the withdrawal of Cuban troops in exchange for the withdrawal of South Africa from Namibia. “We might still be at the table today if not for the Cuban factor,” said U.S. negotiator Chester Crocker.

Cuba supported the 1987 Esquipulas peace agreement in Central America, which ended conflicts in Nicaragua, El Salvador, and Guatemala. In partnership with Norway, Cuba helped mediate the peace accord between the Colombian government and the Revolutionary Armed Forces of Colombia, which was negotiated in Havana in 2016. When a similar effort to promote peace with the ELN guerrillas collapsed, the Trump administration branded Cuba as a state sponsor of terrorism because it refused to hand over the National Liberation Army negotiators to the Colombian government.

Havana’s cooperation is a necessary condition for reaching a Venezuelan settlement that works. That, in turn, means that the Biden administration will have to re-engage with Cuba sooner rather than later if it wants to make progress on the most pressing humanitarian crisis in the Western Hemisphere. Washington’s ongoing sanctions on Cuba are an enormous obstacle, both because they exacerbate Cuba’s dependence on cheap Venezuelan oil and because they are a disincentive for Cuba to cooperate with Washington on anything.

If it makes sense for Biden to reduce sanctions on Venezuela as an incentive for Maduro to negotiate with the opposition, then it makes just as much sense for him to reverse Trump’s sanctions on Cuba in order to gain Havana’s cooperation in the Venezuelan peace process. The Cubans are a major player in Venezuela’s political maelstrom and ignoring them won’t make them go away.

William M. LeoGrande is a professor of government at American University in Washington, DC, and co-author with Peter Kornbluh of Back Channel to Cuba: The Hidden History of Negotiations between Washington and Havana.