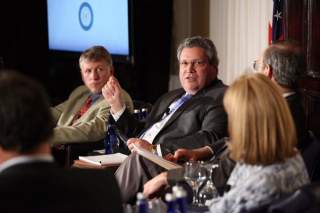 Ever since the 1970s, neoconservatives have alleged that either Republican or Democratic administrations are engaged in the appeasement of a foreign foe. The charge was hurled at Richard Nixon and Henry Kissinger when they negotiated arms-control treaties with the Soviet Union. Jimmy Carter was accused of truckling to the Kremlin as well. Then, in 1982, Norman Podhoretz accused none other than the sainted Ronald Reagan of “appeasement by any other name” for failing to stand up to the Soviet Union. In 2000, Donald and Frederick Kagan issued a book called While America Sleeps in which they claimed that Washington was repeating the mistakes of the British Empire in the 1930s.

Now, another Kagan is the latest to invoke the 1930s, in a column this past weekend in the Wall Street Journal. The 1930s, Robert Kagan says, are back. Kagan avers that “it is hard to avoid the impression”—but is it really that hard for him and his ideological brethren?—“that we have already had our 1931. As we head deeper into our version of the 1930s, we may be quite shocked, just as our forebears were, at how quickly things fall apart.”

At first glance, Kagan’s charge might seem plausible. You can argue that Vladimir Putin really is a new Hitler, as George F. Will recently contended—an insatiable dictator listening to the nationalist credo of Alexander Dugin and intent upon pulling Russians living in the near abroad Heim ins Reich, as the old Nazi phrase had it. You could also point to the reluctance of Europeans to confront Putin—one reason being that they’ve relentlessly downgraded their militaries to the point where they are almost inoperable. Der Spiegel reports that only 8 of 109 German Eurofighters are combat ready, not to mention only 5 of 33 transport helicopters.

But is Putin really on the level of a Hitler? Or is he simply an opportunist? Are the Europeans hopeless? Or are they starting to get real?

The most basic problem is that Kagan doesn’t even bother to make the case that we’re back in the 1930s. He simply assumes it. The real target of his essay is what he depicts as the flaccidity of the liberal democracies in the face of new totalitarian threats. He argues that the United States has been mesmerized by soft power, that its liberal elites are disinclined to engage real and dire threats. Instead, they prefer to retreat into the nostrums of trade creating peace.

But, as Peter Beinart points out in the Atlantic, this is something of a taradiddle. For one thing, Kagan doesn’t make a distinction between what pundits like Tom Friedman proclaim and what policy makers actually practice. But there is a chasm between the two. And so Kagan elides the fact that the Clinton administration engaged in a number of military actions. He also, Beinart reminds us, fails to take into account Obama’s own engagement in Libya, his establishment of a military bases in the Philippines, joint naval exercises with Vietnam, drone warfare and so on. Over the past two decades, the liberal hawks have done as much as the neocons to keep the American imperium a thriving concern.

For the neocons, though, this isn’t enough. They keep trying to move the goalposts towards even greater military outlays and exertions. Hence the monotonous references to the 1930s. But here their case breaks down even more. In the 1930s, the Western democracies truly did look as though they were on the ropes. America was mired in a Great Depression. Germany went fascist. The balance of forces is completely different today. Japan and Germany are America’s allies. No one seriously doubts that the American capitalist economic model is superior to Russia’s, which is why its oligarchs are busily buying up real estate abroad to find a safe haven for their funds. This is not a regime that can plausibly claim that it represents any kind of ideological elan. As for Putin, his most improbable accomplishment may be achieving the seemingly impossible task of reviving NATO as a viable force.

Put bluntly, it’s doubtful that America has been more powerful at any time in its history. Yet there is a profoundly grim, remorseless and Spenglerian cast to Kagan’s essay. Its dolorous quality stems from his apparent lack of confidence in an America that isn’t fighting everywhere and anywhere, no matter how dubious the prospects of victory. He writes that American leaders during the Cold War era “fought wars in distant and largely unknown lands, sometimes foolishly and sometimes ineffectively but always with the idea—almost certainly correct—that failure to act against aggressors would only invite further aggression.” But it’s not clear that this was correct. In fact, Vietnam suggests that the Munich syndrome that Kagan so enthusiastically endorses was bunk. The dominoes never fell in Southeast Asia. The references to Munich amounted to sheer threat inflation, then just as they do now.

Washington does face new threats abroad. But they are manageable. They do not require panic-mongering or a need to “scare the hell out of the American people,” as Senator Arthur Vandenberg advised Secretary of State Dean Acheson in 1947. In his fixation with American power and the world as an utter Hobbesian jungle, Kagan, as Owen Harries has observed, espouses a kind of realism on steroids. But the military solution that Kagan appears to endorse, first and foremost, is hardly the best ambassador for freedom and democracy. Quite the contrary. Maybe Kagan should have more confidence in America and its values. For all his disdain for declinism, Kagan, in blaming America first, comes dangerously close to submitting to it himself.