Robert Kaplan on Realism, Asia, and Getting Iraq Wrong 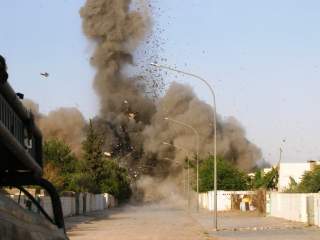 A note from TNI editor Jacob Heilbrunn, who conducted this interview:

Robert Kaplan, chief geopolitical analyst at Stratfor, contributor to the Atlantic, and author of numerous books, including Balkan Ghosts and Asia’s Cauldron, is a veritable fount of ideas, insights and observations. He is, to use the old-fashioned locution, a man of parts. He combines astute geopolitical analysis with meticulous reporting.

At a moment when American foreign policy is in upheaval, when President Obama is contemplating using force in Iraq, when others, particularly neoconservatives intent on resurrecting their missionary credo, accuse him of turning the United States into a superpower that has gone on vacation, it is a particularly propitious moment to contemplate Kaplan’s insights. His core intellectual foundation is based on a belief in realist precepts, which helps to explain why he has written lengthy portraits for the Atlantic about John Mearsheimer, Samuel Huntington, and Henry Kissinger for the Atlantic.

Kaplan seems to have a particular knack for nosing out a story just before it attracts widespread attention. His Balkan Ghosts came out in 1993; in an interview about the book with the eminent scholar Istvan Deak that appeared in the New York Times, Kaplan noted that the region was “a powder keg for 21st-century cultural and religious warfare between the worldwide house of Islam, led by the Turks, and that great swath of Eastern Orthodox Christianity spreading from Athens all the way to Muscovy."

Another region where Kaplan spent a good amount of time was the Middle East and Afghanistan. Kaplan reported on the mujaheedin and produced the book Soldiers of God.   His book The Arabists examined the professionals, often belonging to a Protestant missionary caste, in the State Department who devoted their careers to diplomatic service in the region and who were often accused of being overly sympathetic to the Arab states and, by extension, hostile to Israel. Kaplan went on to support the Iraq war championed by the George W. Bush administration, partly based on his belief that Saddam Hussein possessed WMD and partly in the conviction, formed on the basis of having reported on the ground in Iraq, that it was necessary to oust a horrific dictator—as a young man Kaplan had covered the Iran-Iraq war. Since then, his views about supporting the American invasion in 2003 have shifted dramatically, as this interview demonstrates.

Today, Kaplan is writing a new book and has just returned from a month in Moldova. Once again, Kaplan appears to have been ahead of the foreign policy curve. Perhaps that shouldn’t be surprising since Kaplan is an analyst who chafes at the conventional wisdom and, moreover, repeatedly upends it.