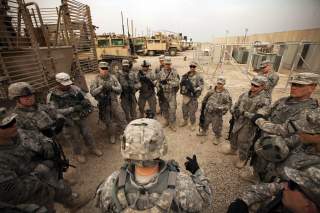 Fifteen years removed from the first night of Operation Iraqi Freedom, most Americans have come to the conclusion that the war in Iraq was a blunder of epic proportions. In its naive pursuit of Western-style freedom and democracy in the Middle East, the George W. Bush administration went into Iraq underprepared, overconfident in what it could accomplish, and negligent about the post-conflict aftermath. The terrible planning, misplaced assumptions, and ideological close-mindedness were bad enough—add in the dumb decision to disband the Iraqi army and ignorance about Iraqi history and demography, and it was amateur hour in the Bush White House.

But what about the human costs of the war? How many people have been killed by the various parties in these conflicts? The disturbing reality is that we simply don’t know. There are a variety of data sets in the public domain, but they only provide us with a rough estimate of the fatalities.

We know how many U.S. servicemembers have been killed. According to the tabulation from icasualties.org, 6,997 American troops have lost their lives in both Iraq and Afghanistan. Tens of thousands of additional soldiers have been wounded, many with life-altering and graphic injuries. The tally doesn’t include deaths in the long list of countries in which U.S. special forces and military advisers are operating, from Somalia and Niger to Syria and the Philippines. The American people will probably never know the exact numbers.

Americans, of course, aren’t the only casualties. Hundreds of thousands of Iraqi and Afghan civilians have been caught up in the crossfire in those two wars, many gunned down or killed by the alphabet soup of terrorist groups that once ran roughshod over both countries during the height of the wars. On the Iraq conflicts, Philip Bump of the Washington Post correlated some figures and assessed that the death toll among Iraqi civilians between the time the first bombs were dropped on Baghdad in March 2003 to when Iraqi officials declared the defeat of the Islamic State’s caliphate was over a half million. About six in ten Iraqi civilian deaths from the U.S.-led coalition in the 2003–2011 timeframe resulted from air strikes. In 2006, during the worst of Iraq’s sectarian bloodshed, 10.7 out of one hundred thousand Iraqis were killed—a ratio that is comparative to 318,000 Americans.

Iraq has gone through two intensive periods of violence in less than a generation. The first, in 2003–2011, consisted of the initial U.S. military invasion of Baghdad, the ensuing Sunni insurgency in the months that followed, and the sectarian civil war that tore the Iraqi capital into fiefdoms. The second period, from 2014–2017, was dominated by the Islamic State’s blitzkrieg across northern, western, and central Iraq and the fierce counterattack from the U.S. Air Force, Iraq’s elite counterterrorism units, and Iranian-sponsored Shia militias. Entire Iraqi cities lie in ruins, with some parts of western Mosul looking like Tokyo in 1945. Reconstruction costs run in the tens of billions, a price the Iraqi government doesn’t have the resources to meet.

Despite Baghdad’s declaration of victory over ISIS, the organization continues to conduct suicide attacks, kidnappings, ransoms, and ambushes against Iraqi security forces and civilians to this day. And the attacks will likely continue as long as Iraqi politics remain driven by a zero-sum parochialism and unequal distribution of services—a lack of leadership only Iraqi politicians can fix.

So, for U.S. officials, what is the main message?

Before going to war, think long and hard about whether it is absolutely necessary to protect the American people. Sit down and question all of your assumptions to ensure your plans take worst-case scenarios into account. Set objectives that are realistic rather than aspirational. Design a campaign plan around those realistic objectives. Be on constant alert for mission creep. Prepare for opportunity losses in other regions of the world as U.S. adversaries and competitors try to use Washington’s distraction to their advantage. And perhaps most important of all, deliver a case to the American people about why military action is appropriate and make them fully aware of what can go wrong.