Rodrigo Duterte Is Key to China's 'Post-American' Vision for Asia 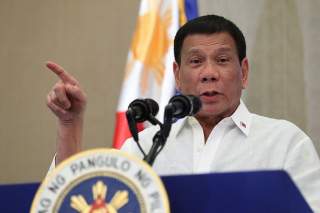 “The future of the Philippines is in the Association of Southeast Asian Nations and in Asia,” declared Philippine president Rodrigo Duterte during his early May keynote speech at the World Economic Forum in Phnom Penh, Cambodia. For the controversial Philippine president, the world is ineludibly entering a post-American world, paving the way for his own vision of an “Asia for Asians.” Despite facing stiff opposition at home, the firebrand leader has forged ahead with his pivot to the east, especially China and, to a lesser degree, Russia. There are two factors that lie at the heart of Duterte’s “Looking East” foreign-policy strategy. First is his growing personal vexation with the West’s criticism of his brutal campaign against illegal drugs, which will likely be followed by sanctions and other punitive measures. Second is the need to diversify the Philippines’ highly concentrated (in the West and Japan) strategic and economic relations.

The vast majority of the Philippines’ arms (more than 70 percent) come from the United States, the bulk of which are based on outdated technology and largely oriented towards counterinsurgency and counterterrorism operations. Traditionally, the European Union, Japan and the United States have also been responsible for almost the entirety of Overseas Development Assistance to and, to a lesser degree, Foreign Direct Investment stock in the Philippines. Duterte is interested in relatively affordable and advanced weaponry from alternative suppliers such as Russia and China. As veto-bearing members of the UN Security Council, Beijing and Moscow can also provide Duterte protection against external pressure and (remotely) possible prosecution under the aegis of the International Criminal Court. The Philippine leader is also interested in tapping the two giants’ assistance in stemming piracy and terrorism in the Sulu and Celebes Sea regions, which have been racked by a deluge of kidnap-and-ransom operations by Islamic State–affiliated groups such as Abu Sayyaf.

Eager to diversify his international patrons, Duterte embarked on back-to-back trips to Beijing and Moscow this month, hoping to bag both diplomatic support as well as tangible economic and defense agreements. While the trip to Russia will at most slightly upgrade a historically anemic relationship, and allow Putin to poke Washington in the eye by openly flirting with its oldest treaty ally in Southeast Asia, Duterte’s visit to China was of far greater importance.

Last month, the Philippine government launched the “Dutertenomics” initiative, an ambitious plan that aims to overhaul the Southeast Asian country’s public infrastructure. The tag price is a whopping $167 billion over the next five years, a huge sum that could not be solely financed by limited domestic fiscal resources. In particular, Beijing is expected to shoulder twelve big-ticket projects worth a total of $4.4 billion. Japan and the Tokyo-dominated Asian Development Bank (ADB) will be the other major partners in Duterte’s grand economic project, which aims to usher in a “golden age” of infrastructure development in the country.

Expecting China to feature as a major partner for the national development, Duterte visited China for the second time in less than a year to attend the Belt and Road Initiative (BRI) mega-summit in Beijing, which saw the participation of around a hundred countries, including twenty-nine government leaders. During the event, Chinese president Xi Jinping pledged $113 billion to directly connect the industrial heartland of China to western Europe via new maritime and land-based infrastructure networks, initially dubbed the New Silk Road project.

Southeast Asia is expected to be a key component of the so-called Maritime Silk Road. Under Duterte’s predecessor, Benigno Aquino, China excluded the Philippines from the plan due to rising tensions in the South China Sea. To China’s chagrin, Aquino took China to international court over its aggressive behavior in adjacent waters. But as soon as Duterte raised the white flag, Beijing embraced the Southeast Asian country as a critical component of its global infrastructure scheme. Under the BRI, China could play a far greater role in reshaping the Philippine economic landscape than any other country—and possibly even Japan and the West combined—in coming decades.

So far, Beijing has set up an initial $40 billion Silk Road Fund, with the Beijing-based Asian Infrastructure Investment Bank shouldering another $50 billion. Over coming decades, Beijing—primarily through its policy banks such as the Export-Import Bank of China and Development Bank of China—is expected to invest up to $1.3 trillion to rebuild the global infrastructure landscape with Chinese characteristics.

Given Asia’s $8 trillion infrastructure-spending gap, and the limited resources of the World Bank, International Monetary Fund and the ADB—not to mention the bizarre protectionist turn in America—much of the world has welcomed, albeit cautiously, China’s new economic vision for the world. So far, at least sixty countries have signed up to the BRI.

From Beijing’s point of view, it is an expensive but sound strategy, which will allow it to overcome infrastructure overcapacity at home, find new investment markets for its troubled state-owned enterprises, more optimally invest (in theory at least) its huge foreign reserves and further integrate trade partners into a China-centric global economic order.

Above all, it will allow China to gain a strategic foothold among an expanding pool of increasingly indebted nations. As the New York–based Fitch Ratings recently warned, the BRI project seems to be less driven by “genuine infrastructure needs and commercial logic” than by “political motivations.” This was evidently clear when Beijing, on the sidelines of the BRI summit, offered the Philippine military (a very U.S.-oriented institution) a $500 million loan to purchase advanced Chinese weaponry. It was a direct attempt at charming the Philippine defense establishment, which views Beijing with suspicion.

The allure of Chinese investment may partly explain Duterte’s recent decision, as the chairman of the ASEAN, to shield China against any criticism over its massive reclamation activities in the South China Sea—not to mention his decision to scale back military cooperation with America, particularly in the disputed waters. China’s purported threat of war against the Philippines seems to have further encouraged the Philippine leader to seek a modus vivendi with the Asian juggernaut. Notwithstanding lingering concerns at home over Chinese investment deals, Duterte seems more than determined to join what he sees as an emerging Pax Sinica in Asia.