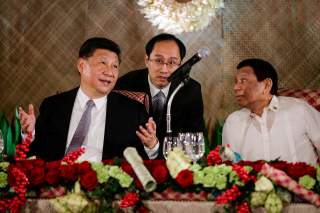 In an early-August speech before the powerful Filipino-Chinese Chambers of Commerce and Industry, Philippine president Rodrigo Duterte made a startling announcement. Ahead of his upcoming visit to China, the fifth in less than three years, the Beijing-leaning Filipino leader promised to raise the 2016 Arbitral Tribunal ruling against China’s claims in the South China Sea. This marked a remarkable shift from his earlier position. Duterte had previously dismissed the United Nations Convention on the Law of the Sea (UNCLOS) arbitration award as an exercise in futility. His stance was aligned with the one taken by China, which has categorically rejected UNCLOS as “null and void” and a “piece of trash paper.” If anything, Duterte earlier suggested that confronting China over the disputes risks nothing short of war and a suicidal conflict.

A few months into power, Duterte went so far as stating, “China has the kindest soul of all” and “[we] will never be ready to fight with China.” Thus, he boldly declared: “In the play of politics now, I will set aside the arbitral ruling. I will not impose anything on China. Why? Because the politics here in Southeast Asia is changing.” What he meant by “Southeast Asia is changing” was this: The United States is in a permanent state of decline and, therefore, China is the new boss in the town. Like a small town mafia boss, he called for conciliation with the new Big Boss. To cap it all, Duterte shamelessly called on smaller nations to be “meek” and “humble” in exchange for China’s “mercy.”

Against this backdrop of rhetorical kowtow, a mixture of disbelief, bemusement and triumphant relief greeted the Filipino president’s latest statement. All of a sudden, Duterte signaled a tougher stance against China. And there was immediately a chorus of support. Even his most strident critics expressed support for him.

A more careful analysis, however, suggests that Duterte isn’t signaling a more confrontational policy towards China; instead, he is making tactical adjustments to protect his rapprochement with his self-professed strategic patron. This is the president who once brazenly claimed that Xi vowed to protect him from ouster by U.S.-aligned elements. His biggest concerns center around his top generals, who have openly lashed out at China’s “bullying” of the Philippines, and finding a legal justification for proposed resource-sharing agreements with China in disputed waters.

“The arbitral ruling, we will talk about [it] . . . That’s why I’m going to China,” Duterte said during his speech before Filipino-Chinese businessmen, referring to his scheduled meeting with Chinese president Xi Jinping, whom he has met at least twice in the past year alone. “I’m going to China to talk. Did I not tell you before, that before my term ends, I [would] be talking about the [disputes]?”

Former Foreign Secretary Albert del Rosario, who oversaw the Philippines’ arbitration proceedings against China, was ecstatically supportive. “Let us salute him and assure him of the support of all Filipinos,” said Del Rosario, a former ambassador to Washington, DC following years-long public spat with the president over the country’s China policy.

Though less impressed, prominent statesmen such as Sen. Panfilo Lacson, a staunch China critic who prefers to team up with the United States against China, were visibly pleased.

“We need to discuss this thoroughly. So it’s perfect timing since there will be a meeting with President Xi Jinping,” the senator said in a mixture of Filipino and English.

When the Chinese Ambassador to the Philippines Zhao Jianhua made it clear that China would reject the arbitration in any bilateral talk, Duterte claimed that he was hell bent on forging ahead.

Not long after, however, Philippine foreign secretary Teodoro Locsin poured ice on fire by raising doubts over Duterte’s earth-shaking announcement: “There is no final date yet. I will be talking to the Chinese ambassador and finalize the agenda [of the early-September meeting].”

The Man on Horseback

Shortly before Duterte’s startling announcement, something interesting took place. The Philippine defense establishment, including top Filipino generals, stepped up their public criticism of China and its behavior in Philippine waters almost in unison. Defense Secretary Delfin Lorenzana, who earlier lashed out at a suspected Chinese militia vessel sinking of a Filipino fishing boat, blatantly accused China of “bullying” behavior right after the Chinese envoy tried to portray his country as a peaceful neighbor in a high-profile event in Manila.

The Philippine defense chief, formerly a defense attaché in Washington, DC, highlighted Chinese de facto seizure of Manila-claimed Scarborough Shoal, harassment of Filipino fishermen, and swarming of Philippine-held islands in the Spratly Islands through an armada of militia forces, and even unilateral deployment of research vessels into the Philippines “exclusive economic zone.”

Lorenzana also lashed out at Chinese warships, which deliberately switched off their Automatic Identification System (AIS) during their passage within Philippine territorial waters in the past month. According to the United Nations Convention on the Law of the Sea (UNCLOS), foreign warships, when passing through the territorial sea of a coastal state, should refrain from any activity which, “[is] prejudicial to the peace, good order or security of the coastal state.” The Philippine defense chief didn’t rule out the possibility of hostile actions, including espionage, by Chinese warships. Lorenzana called on Duterte to raise the issue with Xi.

The Armed Forces of the Philippines (AFP) spokesperson Brig. Gen. Edgard Arevalo openly accused Beijing of “duplicity” and “deception” by intruding into Philippine waters. Meanwhile, Philippine National Security Advisor Hermogenes Esperon didn’t shy away from raising concerns over warming ties with China, describing the influx of Chinese nations into the Philippines as a potential national security “threat,” following an incident involving Chinese tourists caught illegally taking pictures of a Philippine naval base near the Spratly Islands. Then things took an even more interesting turn, with Lorenzana criticizing the establishment of China’s billion-dollar casinos near Philippine military bases. He suggested they could quickly shift into a den of spies.

After years of systematically courting the defense establishment, which has shown remarkable institutional independence from presidential whims, Duterte likely felt compelled to take a tougher (rhetorical) stance against China.

There is, however, another motivation for Duterte to raise the arbitration award, namely a desperate search for any justification for resource-sharing agreements with China in the South China Sea. By vaguely citing the 2016 arbitration award’s ruling on China’s ‘traditional fishing rights’ in a tiny portion within Philippine waters, namely around the Scarborough Shoal, as well as the UNCLOS’ provisions on resource sharing, the Filipino president wants to facilitate controversial and potentially illegal deals with China.

Ahead of his visit to China, Duterte unabashedly announced the possibility for sharing energy resources in the contested Reed Bank, which falls in Philippines’ waters and China’s nine-dashed-line. The negotiations seem to be going smoothly, thus it’s likely that Duterte is looking for any quasi-legal pretext to cement controversial deals with Beijing. In short, to those who welcomed Duterte’s raising of the arbitration award as an optimal way to confront China: be careful what you wish for.