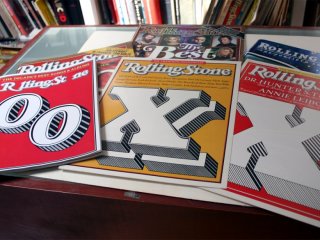 Maybe some of the New Republic staffers who resigned in a huff over its transformation by owner Chris Hughes won’t be out of work for long now that Rolling Stone is furiously backpedaling on its bogus account about sexual assaults by fraternities at the University of Virginia. That story, entitled “A Rape on Campus,” mostly chronicles one UVA student named Jackie’s quest for justice after being allegedly gang raped by seven men at a UVA fraternity in the fall of 2012. The story, which was published amid a growing conversation about sexual assault at American universities, set off a firestorm of protests on UVA campus and elsewhere and led the school’s administration to suspend all greek life for the remainder of the year.

Increasingly, however, it seems doubtful that the freelance journalist who wrote the story, Sabrina Rubin Erdely, followed even basic journalistic ethics such as trying to contact any of Jackie’s alleged attackers. Rolling Stone’s editors may soon be looking for new posts. The brouhaha fits into a pattern of media stories that presume guilt before innocence in the quest for a sensational and politically correct story. The liberal organization ThinkProgress, for example, poured scorn on news outlets that were skeptical of the essay, arguing that they grossly underestimated the “it’s been two weeks since Rolling Stone published an investigation into the University of Virginia administration’s failure to adequately respond to allegations of a gang rape at a frat house, and the backlash to the story is intensifying. Much of that criticism is stemming from doubts that college men are capable of carrying out a premeditated assault on that scale — an assumption that ignores the ugly truth about the nature of these crimes. Outlets ranging from the New Republic to Slate to Fox News have suggested the Rolling Stone reporter failed to do her due diligence because she presented Jackie’s story as fact, and didn’t let the accused men tell their side of the story.”

Well, yes. Who looks absurd now? Those outlets that tried to hunt down the truth? Or ThinkProgress for remaining intransigently committed to ideologically comforting assumptions?

Initially, both Erdely and Rolling Stone stood by the piece, but Erderly in particular was coy and ambiguous about her specific methods. As scrutiny over the story intensified, both Erderly and Rolling Stone said they maintained absolute confidence in Jackie’s credibility, with Rolling Stone saying in a statement released on Thursday that, “Through our extensive reporting and fact—checking, we found Jackie to be entirely credible and courageous and we are proud to have given her disturbing story the attention it deserves.”

A few hours ago, however, it relented as scrutiny over Jackie’s account has increased. In a statement released on Friday afternoon, Rolling Stone said: “In the face of new information, there now appear to be discrepancies in Jackie's account, and we have come to the conclusion that our trust in her was misplaced.” The statement goes on to explain that “Because of the sensitive nature of Jackie's story, we decided to honor her request not to contact the man she claimed orchestrated the attack on her nor any of the men she claimed participated in the attack for fear of retaliation against her.”

The final paragraph strikes a similar note, stating: “We were trying to be sensitive to the unfair shame and humiliation many women feel after a sexual assault and now regret the decision to not contact the alleged assaulters to get their account.” There are a couple of things worth noting. First and most importantly, although there are clear discrepancies in the exact account published in Rolling Stone, it is by no means clear that Jackie was never raped.

The Washington Post has been interviewing Jackie and many of her friends and other UVA students in recent days, and it reports that Jackie’s friends “believe something traumatic happened to her, but they also have come to doubt her account. They said details have changed over time, and they have not been able to verify key points of the story in recent days.” None of this out of the ordinary for eyewitness testimony in general, much less rape and trauma victims.

Still, regardless if Jackie was raped or not, the actions of Erderly and Rolling Stone are downright appalling. While both editorial and journalistic standards have undoubtedly declined in recent years, this is one story where they should have been heeded with puritan dedication. Period.

Instead they clearly let their biases and devotion to political correctness get in the way of accurate reporting. While I wasn’t familiar with her work before this, a quick review of Erderly’s CV demonstrates she’s one of these social media-era reporters of our brave new world who oppose objectivity on moral grounds. They cover stories and subjects from an admittedly biased perspective. And they are darned proud of it.

Erderly clearly feels passionate about the subject of rape. She also wants to bring greater attention to the subject. But in trying to raise attention to the issue she based much of her article on the account of one person which, out of deference for the alleged victim, she did not corroborate. Erderly knew Jackie’s story must be absolutely true because she had decided how horrible rape culture was at UVA before she ever stepped foot on campus. Jackie’s story just confirmed what she already knew and provided a convenient way to teach anyone with doubts.

Erderly’s overzealousness may have even extended to her dealings with Jackie. Jackie told the Washington Post that she originally didn’t want to go public with her story, but Erderly pushed her. “I didn’t want the world to read about the worst three hours of my life, the thing I have nightmares about every night,” The Post quotes Jackie-- who claims to be on antidepressants and suffering from PTSD-- as saying.

The Post goes on to write, “Overwhelmed from sitting through interviews with the writer, Jackie said she asked Erdely to be taken out of the article. She said Erdely refused and Jackie was told that the article would go forward regardless. Jackie said she finally relented and agreed to participate on the condition that she be able to fact-check her parts in the story, which she said Erdely accepted.”

Rolling Stone, which has also shown something of a fetish for covering “millennial” sexuality, and the satanic nature of greek life, was little better than Erderly herself. Rolling Stone ended its statement on Friday by saying “We are taking this seriously and apologize to anyone who was affected by the story.”

You can put every future rape victim on that list. Rape victims coming forward have traditionally been met with strong skepticism-- to say the least. While this has started to change in recent years, the “discrepancies” in such a prominent and widely discussed story as Jackie’s has undoubtedly set back the clock on how our society views accusations of rape-- regardless if Jackie was or wasn’t raped. In failing to do the most rudimentary fact-checking, Rolling Stone and Erderly have just done a horrible disservice to rape victims everywhere.

Zachary Keck is Managing Editor of The National Interest.