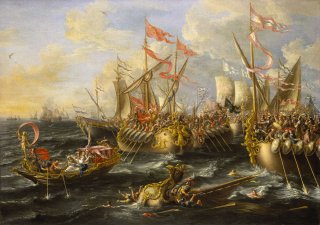 The final transformation of Rome’s armies into a professional all-volunteer force came during a period of shifting Roman security demands as well. With the Battle of Actium (31 BC), Octavian, soon to be Augustus, had removed both the last near-peer state on the Mediterranean (Cleopatra’s Ptolemaic kingdom in Egypt) and the threat of other Roman peer competitors (in the form of rival Roman commanders) for the foreseeable future. Consequently, when Augustus regularized the army’s terms of service, he also reoriented by the end of his reign the Roman army’s mission from one of expansion to border protection. The legions were redeployed along the whole frontier, rather than concentrated for offensive operations, and Augustus himself left instructions to his successors that they should focus on holding the empire rather than expanding it. Further major campaigns of imperial expansion under Augustus would be infrequent and generally of smaller scale than those that came before.

The American shift to an all-volunteer force in the last decades of the Cold War is thus hardly a sui generis event. Rather, the United States joins the company of a number of great powers which, having acquired a position of dominance through mass conscript armies, then sought to maintain that position with a professional army. In that context, the experience of Rome is quite informative, given that it at least started the process as a republic. And it turns out, there are already quite a few signs that the processes which began to work upon the Roman army once it started to professionalize are now already working upon the American All-Volunteer Force, with potentially perilous results.

ONE OF the assurances of the Gates Commission was that the adoption of the All-Volunteer Force would not necessarily restrict the ability of the United States to reengage conscription in the event that some future conflict required it. Consequently, the ability of the United States to respond to the need to raise very large armies in the event of renewed large-scale conventional war with a peer competitor would not be reduced. The Romans seem to have thought the same thing. Roman commanders were certainly able to raise large armies relatively quickly in Italy during the Roman civil wars of the first century BC, with the ethic of universal citizen military service still a quite recent memory. As late as 6 AD, the Romans were able to rapidly raise fresh forces in response to a revolt in Illyria, supplementing the ten regular legions brought into the province with 10,000 Italian veterans (the equivalent of two more legions) and a “large number of volunteers.”

But that strategic flexibility does not seem to have lasted for very long. It is striking that only a small portion of the total force that responded to the Illyrian crisis was made of new units. Despite the war in Illyria continuing for three years, the fighting was done primarily by legions redirected from the Rhine and Danube frontiers. That meant calling off Tiberius’ planned campaign against the Marcomanni (a Germanic people) because those legions had to be redirected to Illyria, a move which in turn left the Roman presence in Germany thin on the ground, contributing to the isolation and destruction of the three Roman legions left behind at the Battle of Teutoberg Forest in 9 AD. The three lost legions were not replaced with fresh formations either, with existing legions instead being shifted from Spain and Pannonia to cover the gap, and Augustus responding by halting Roman expansion and, as noted above, advising his successors to do the same. The strain on the remaining legions is evident when in 14 AD the legions on the Rhine mutinied, citing among other injuries that their tours of duty had been extended well beyond the regulation twenty years, in an apparent ancient version of stop-loss.

In the decades that followed, the Roman army increasingly calcified as a professional force. Emperors sometimes added a legion or failed to replace a lost legion, but the overall strength of the army generally stayed just below thirty legions with a matching number of non-citizen auxiliaries. Not only did the size of the Roman army become resistant to change, so did its fighting style. While the Roman conscript legions of the Middle and Late Republic had been quick to innovate or adapt foreign weapons, the legions on the Column of Trajan (110 AD) and the Column of Marcus Aurelius (193 AD) had substantively the same organization, equipment, and tactics as Augustus’ legions fully two centuries earlier (although some degree of tactical flexibility was kept through the use of non-Roman auxiliaries using their own fighting styles).

It is not too hard to find the sources for this calcification. When it came to force structure, the vast cost of keeping a professional army in the field continuously was a perpetual burden to the Roman treasury, probably consuming around half of all Roman state revenues. Such a crushing burden left little room for organizational innovation. Where the Roman Republic, with its conscription-based system, had often been able to do more with less compared to its rivals, the Roman Empire using a long-service professional model was forced to outlay tremendous sums to maintain dominance. At the same time, the permanence of the legions themselves may have served to encourage the relative stagnation in both tactics and equipment.

The emergence of a permanent, standing Roman All-Volunteer Force had significant strategic impacts too. While the Romans had never been very averse to war and Roman popular resistance to further military activity during the Republic was generally limited, emperors possessed of a “paid for” standing military had few incentives not to use it. The strategic value of Claudius’ invasion of Britain, launched to provide the emperor the political fig-leaf of military success, was questioned even in antiquity. Similarly, Dacia, invaded by Trajan in a war of choice in 101 AD and finally absorbed as a Roman province in 106 AD, was the first province to be relinquished by the Romans (practically in 253 AD, formally by 275 AD) because its exposed position rendered it untenable.

So long as Rome’s security threats remained relatively the same, facing non-state peoples over the Rhine and Danube (and after 43 AD, in Britain) along with a relatively decentralized and less aggressive peer competitor in the form of Parthia, the calcified Roman military system was able to cope reasonably well. But by the third century, that threat profile had changed substantially, with the peoples living over the Rhine and Danube organized into increasingly larger and more dangerous confederations and with the far more centralized and aggressive Sassanid Empire replacing the Parthians as Rome’s peer competitor to the east.

By that point, however, the Roman army had largely ossified as an institution. On the frontier, the legions were progressively broken up into ad hoc detachments called vexilationes, as the empire tried to meet a changing security situation with the calcified, professional military it had rather than raising fresh formations it could not afford in no small part due to the heavy cost of maintaining the legions themselves.

The notion that, in an emergency, the Romans might return to their old ways was exposed as an illusion in 238 AD when the Roman Senate attempted to hold a traditional dilectus in Italy in response to an outbreak of civil war. The formations raised that way were little more than a self-armed mob, unable to even contain the small detachment of praetorians in the city, much less handle a field engagement against a true army. Instead, the Senate was only rescued by the surprisingly stubborn civilian defense of Aquileia and the logistical incompetence of Maximinus in his effort to march on Rome. In stark contrast to the days of the republic, when the Romans could raise significant armies to recover from defeats even with enemy forces operating in Italy, by the third century AD the Romans were apparently simply incapable of rapidly raising new domestic forces in an emergency. Subsequent reorganization by Diocletian and Constantine would resolve some of the operational mobility issues of the old system, but not the crushing budgetary costs nor the inability of the system to be scaled up. These limitations left Roman commanders increasingly reliant on foederati, non-Roman troops serving under their own leaders, to make up the difference, especially in the Western Roman Empire, which in turn resulted in the long-term collapse of central authority.

It is not hard to see the warning signs that a similar process of degeneration is in its early stages with the American All-Volunteer Force. Despite the Gates Commission’s pollyannish insistence that an all-volunteer force could be expanded during periods of greater need, the opposite has proved to be true. Faced with conflicts connected to the Global War on Terror in Afghanistan and Iraq, the United States found itself stretching its limited forces thin, unable or unwilling to either expand the military or to curtail strategic objectives. Notably, these were conflicts, while long-running and large compared to American military activity in the decade prior, were quite small compared to what would be required in the event of a peer competitor conflict.