Rome and America: A Shared Fate? 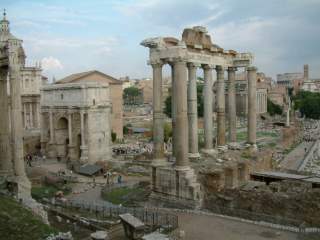 In 509 B.C., the leaders of ancient Rome abolished their 244-year old hereditary monarchy, banished their last king and his family, and set in motion the establishment of a constitutional republic. Executive power, once held by the kings, was given to a dual authority of two praetors (later called consuls), whose authority was divided to prevent governmental abuse and tyranny. The executives were proscribed from imposing death sentences without legislative approval. The power of the patrician assembly, or Senate, was curtailed by a new council of plebeian magistrates called tribunes, which could nullify noxious actions of the consuls.

The plebs soon demanded definite, written and secular laws. Before, as Will Durant tells us, patrician priests had been the recorders and interpreters of the statutes, had kept their records secret, and had exploited their power monopoly to thwart social change. But now, because of the pleb agitation, the customary law of Rome was codified into the famous Twelve Tables, displayed in the Forum for all to see. “This seemingly trivial event,” writes Durant, “was epochal in Roman history and in the history of mankind; it was the first written form of that legal structure which was to be Rome’s most signal achievement and her greatest contribution to civilization.”

As Americans begin their 241st Fourth of July celebration, commemorating our Founders’ courageous decision to escape the tether of kingly rule and create a new kind of constitutional republic, it might be an appropriate time to cast just a little thought back to the similar creation of the Roman republic. It was a remarkable achievement that created a governmental structure that was to endure for 467 years.

For more than 350 years of that span, the Roman republic brought to its people a formidable degree of civic stability. There were, of course, wars, internal struggles, scandals, class frictions and various threats from within and without. The republic was the creation, after all, of human beings.

And, like the American Republic, the Roman version began with limited levels of true democracy and expanded its democratic promise slowly over time. But through it all the system held together, fortified by its equilibrium of power and the citizen protections engendered by that delicate balance. Indeed, Durant calls it “one of the ablest and most successful governments that the world has yet seen….It provided the framework, sometimes the battleground, of Roman history.”

But, alas, after that initial 350 years the Roman polity entered a century-long crisis of the regime, characterized by governmental dysfunction, heightened political animosity, class struggle and a progressive loss of faith in the system. As the republic moved fitfully from crisis to crisis, seemingly with less and less capacity for maintaining any semblance of order, the pillars of the old republic began to crumble, and it gave way inevitably to Rome’s empire phase. Opting for stability over democracy, Romans turned back to monarchy in the form of its new Caesars. The republic died a largely unlamented death, and arbitrary rule once again fostered flights of tyranny.

During America’s Fourth of July observance this extended weekend, the hotdogs and fireworks and games will be accompanied by heaping helpings of rhetoric celebrating the genius, stability, longevity and even the superiority of what our Founding Fathers created nearly a quarter of a millennium ago. And there’s nothing particularly remiss in such self-congratulatory enjoyment on such an occasion as the nation’s birthday.

But it might be an appropriate time also for a little sober thought about the fleeting nature of man’s works on earth. Perhaps it is worth noting the words of the late Irving Kristol in responding to Francis Fukuyama’s famous thesis that the West’s Cold War victory marked the culmination of mankind’s civic development— “the universalization of Western liberal democracy as the final form of human government,” as he put it. Kristol, a leading public intellectual of his time, greeted Fukuyama’s thesis with the words, “I don’t believe a word of it.” He added that “all forms of government—democracy, oligarchy, aristocracy, monarchy, tyranny—are inherently unstable…all political regimes are inherently transitional…the stability of all regimes is corrupted by the corrosive power of time.”

A corollary of Kristol’s powerful observation is that governmental systems—even those as brilliantly conceived and delicately balanced as the Roman or American ones—aren’t perpetuated merely on the basis of their own virtues. They must be constantly nurtured, bolstered, protected, refurbished and restored. Thus, for Americans today it isn’t enough merely to celebrate the glories of our system, which could so easily slip into a progressive erosion and may already have done so. It is necessary further to appreciate the dangers posed when the country loses sight of the fundaments of our system that are the hallmarks of its success—carefully proscribed government, an equilibrium of separated powers, minority rights and protections, the ethos of liberty.

All those things were manifest in the early Roman republic, and all dissolved over time, until the republic had lost its relevance. And so, inevitably, Romans lost their republic.

So let’s have a grand Fourth and celebrate America in all of its glory. But let’s also contemplate just a bit the legacy of the Founders and the fragility, as well as the genius, of what they so brilliantly crafted after they so bravely cast us away from our kings and the abuses of kingly power. The value in such a contemplation can be seen vividly in the great success and ultimate demise of the Roman republic.