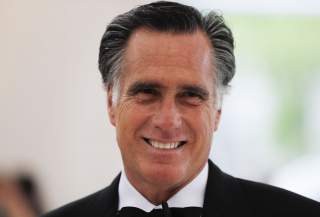 The Romney op-ed is ostensibly about character. “The president has not risen to the mantle of the office,” Donald Trump’s predecessor as GOP standard-bearer wrote.

But what’s most revealing is that the lede, and the crux of his argument, is in opposition to President Donald Trump’s December foreign policy moves-- moves that have shaken the establishment, and thrilled elements of the president’s base, as well as long-time critics of the Washington consensus.

Romney, set to be sworn in later this week along with a new, oppositional and Democratically-controlled House of Representatives, decried the “deep descent” of December. 2018 closed out with President Trump parting ways with his establishment-darling Defense secretary, James Mattis, and initiating pull-outs and partial pull-backs in Afghanistan and Syria, respectively. Mattis told U.S. military personnel upon his departure New Years’ Eve to “keep the faith in our country and hold fast.”

“Romney largely uses criticisms of Trump's character flaws as a jumping off point to oppose the parts of the president's agenda that differ from Mitt's GOP,” said W. James Antle III, editor of the American Conservative.

But for some critics of this president, as well as those concerned about the ongoing Robert S. Mueller-led independent investigation into the president’s campaign, the Romney op-ed was an opening salvo in what could be prove to a ruinous year for this president.

Former aides fret that Trump’s moves to challenge establishment orthodoxy on foreign policy could be the bridge too far that finally spell Trump’s doom. “Can't do it this way,” the former senior administration official has told me. “Plays into hands of the never-Trumpers for a reason.”

But others reacted that Romney isn’t president for a reason.

“The truth is [Mitt Romney] lacked the ability to save this nation,” said Brad Parscale, Trump’s pugilistic 2020 campaign chief, soon after the publishing Tuesday night on the 2012 Republican presidential nominee. The president “has saved it,” Parscale said. “Jealousy is a drink best served warm and Romney just proved it.”

“Benedict Arnold is a poor model to follow on your way into the US Senate,” Ret. Col. Douglas Macgregor, who’s been considered by the administration for national security advisor in the past, told me.

Macgregor, a favorite of Fox host Tucker Carlson, full-throatedly backs the withdrawals from Afghanistan and Syria, seeing the manuevers as in the national interest. For those who seek a course correction in U.S. foreign policy, Trump’s December was a shocking, needed breath of fresh air.

Piling on was the more mainline Fox commentariat, with prominent personality Dan Bongino remarking: “This guy is hard to take. With everything going on in the country right now Mitt swears in and right away he hits the POTUS. Few of us are surprised though, we all knew Mitt to be a world-class opportunist.”

And Romney is now going in the opposite direction of his state’s senior senator, Mike Lee, who favors many of the White House’s recent foreign policy moves. Libertarian-leaning and a close ally of Trump whisperer Rand Paul, Lee, who previously distanced himself from Trump’s politics, recently signaled that he will back the president for re-election.

What is clear is that doubts about Romney’s new role in the U.S. Senate are dissipating.

Romney, who was briefly considered by this president for secretary of State, will be loathe to work tightly with the administration. In the op-ed, Romney lamented the departure of most of the appointees he admired: “his early appointments of Rex Tillerson, Jeff Sessions, Nikki Haley, Gary Cohn, H.R. McMaster, Kelly and Mattis were encouraging.” All, of course, are now gone from this White House. With this gauntlet thrown, Romney positions himself as the heir to a troika of Trump Senate critics—the retiring Ben Sasse and Jeff Flake, and the late John McCain. Never a dull day in Trump’s Washington.