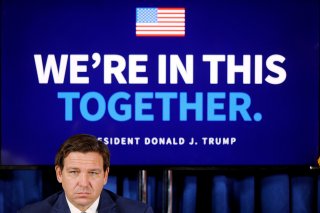 Florida Gov. Ron DeSantis (R) remains as the frontrunner in his home state, as his approval ratings experienced a jump and his rumored 2024 White House bid saw considerable support over the weekend.

An approval rating above 50 percent offers a strong foundation for a candidate heading into reelection, as DeSantis is on track to ramp up his candidacy for the 2022 elections in a bold position. The same poll released in July found his approval ratings in a rougher spot, with 45 percent approving and 49 percent disapproving.

When compared to hypothetical competition for an upcoming election, DeSantis carries noteworthy margins over two potential Democratic contenders—state Agriculture Commissioner Nikki Fried and Rep. Charlie Crist (D-Fla.). The first-term GOP governor holds a 9 percent lead over Fried and an eleven percent advantage over Crist, according to the poll.

In terms of recognition, Florida voters who participated in the poll had a difficult time recognizing Fried, as more than one-third of respondents, or 37 percent, didn’t know who she was. Crist, a former Republican who held office as governor for four years, has slightly more recognition, as only ten percent said they do not recognize his name. Four percent of participants said that they did not recognize DeSantis.

Crist, however, found himself underwater in terms of popularity, as 41 percent had an unfavorable view of him, while less than one-third, or 27 percent, said they had a positive view of him.

“At this point, [DeSantis’s] prospects for re-election are good,” Dr. Sharon D. Wright Austin, a political science professor at the University of Florida, said. “Floridians have been pleased with the availability of the covid vaccine for individuals over the age of sixty-five. He is also addressing the unemployment issues. Floridians have also been pleased with the fact that many schools are open and so are other public places.”

The Mason-Dixon poll also showed that DeSantis rallied a strong backing from both conservative and independent voters compared to his hypothetical competition.

DeSantis also spoke at the Conservative Political Action Conference (CPAC) in Orlando on Friday, as he positioned himself in the national spotlight amid speculation of a 2024 presidential run.

A straw poll released during CPAC uncovered that former president Donald Trump still maintains striking power over the Republican Party, as 68 percent of CPAC attendees said they wanted Trump to run again, and 55 percent supported Trump’s election in 2024 if he decides to run. DeSantis came in second at 21 percent, while no other candidate achieved support in the double digits

When Trump was out of the pool of contenders, however, DeSantis garnered a first-place spot with 43 percent of support.

“In American politics, things can change very quickly, however. He can have a high approval rating today and low one tomorrow,” Austin said.

Although there is a crowded prospective presidential playing field for the GOP, DeSantis has risen in the ranks ever since CPAC compared to other White House hopefuls.