Ron DeSantis: The GOPs 2024 Candidate to Take on Joe Biden? 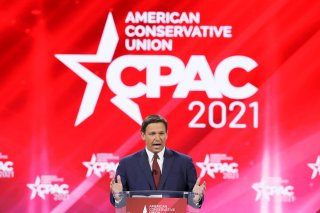 Florida Gov. Ron DeSantis (R) has garnered the leading spot in a potential 2024 Republican presidential primary, if former President Donald Trump does not decide to run, according to a new poll.

DeSantis was the favorite among his competitors, as he earned seventeen percent of support from Republican respondents in a poll released Wednesday by the GOP polling firm Echelon Insights. Former Vice President Mike Pence trailed right behind, receiving sixteen percent of support, a figure that dropped by five percent from the same survey taken last month.

DeSantis and Pence were the only contenders who saw double-digit support in the poll, as Sen. Ted Cruz (R-Texas) placed in third with five percent, followed by former U.S. Ambassador to the United Nations Nikki Haley, Fox News host Tucker Carlson and former secretary of state Mike Pompeo, all of which earned four percent of support from respondents.

More than a third of respondents said they are unsure of who they would vote for.

“Let me start by noting that one shouldn't take any polls along these lines very seriously at this point,” Timothy M. Hagle, an associate professor of political science at the University of Iowa, said. “That said, most polls at this point are based on name recognition. To some extent we see the effect of this in the Echelon poll.”

“DeSantis had a sharp increase in his popularity and this was likely due to his being in the news a bit more over the past month. DeSantis had been a strong Trump supporter so he should appeal to Trump voters. That he is working to open his state more than some other governors is likely appealing to more establishment Republicans as well,” Hagle said. “News stories of late have increased his name recognition, so it's not surprising that his popularity in the poll has increased.”

The Florida governor spoke at the Conservative Political Action Conference (CPAC) in Orlando earlier this month, where he also saw support from CPAC attendees in a straw poll that put him in second place, behind Trump, in a potential 2024 GOP presidential primary race.

The Echelon poll also revealed that Trump still maintains an iron-like grip over the party, as sixty percent of respondents said they would “definitely” or “probably” vote for the former president in the next Republican presidential primaries, up from fifty-four percent from the same poll taken in February.

Hagle noted that Trump’s “continued popularity” among the Republican party and its voters is largely due to his national name recognition that’s followed him during and after his White House term.

“There will be, of course, some voters who will be loyal to Trump no matter what,” Hagle said. “Others may be inclined to look for an alternative given Trump's age and how the aftermath of the 2020 election was handled.”

The Echelon Insights poll surveyed 1,008 registered voters from March 15-23. No margin of error was reported.

“It's not surprising, however, that a little more than a third are unsure at this point. Once we get closer to the 2022 midterm elections we'll start to see possible presidential candidates campaigning for other candidates and this will begin to increase their name recognition,” Hagle said. “Voters will then start to make more informed evaluations of those considering a 2024 presidential run.”