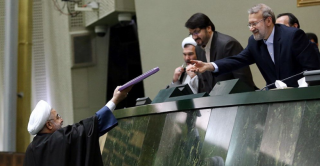 Iran’s economic woes will worsen under President Rouhani if he does not listen to the voice of reason and experience. His most challenging problem will be to maintain equilibrium between the Islamic ideal of a better income distribution and the real national demand for rapid economic growth. Striking that balance will be a tough call in the context of declining public resources both in material and human terms (secular Iranians are greatly underutilized). However, given Rouhani’s neoliberal economic direction, it is almost certain that under his leadership, income inequality and popular dissatisfaction will increase while the economy will fail to grow at an appropriate rate.

Rouhani has already lost the opportunity to attract hundreds of the nation’s economic and planning experts. He needs to get all the expert help possible, but that can only come when his government looks beyond the neoliberals. He must also focus attention on implementing national and local economic policies to boost rapid economic growth with income redistribution through progressive tax policies. A contractionary economic policy will be wrong moving forward. Iran needs an expansionary policy that creates jobs in smaller economic units across the nation. Controlling inflation cannot be helpful when it depresses the economy. Any price stability must account for job creation and rapid economic growth.

It is unfortunate that the Rouhani team is trying to reinvent the economic policy wheel while plenty of experience exists demonstrating what needs to be done: the state needs to get “prices wrong,” take the lead, implement expansionary policies, and create internal discipline. All development experiences, including those of South Korea, Taiwan, China, Turkey, Malaysia and Brazil, indicate that in the early stages of economic development, the state has led, not the private sector, and that the state has been able to do so only after it disciplined itself (became lawful) and brought the rent-seeking private sector under a tight leash.

Rouhani needs to adopt a developmentalist approach requiring a strong state (abiding by the rule of law) and smart management. It also needs to apply time-tested economic policies including programs for labor-force development, technological advancement, entrepreneurship training and environmental protection. Iran also needs to thicken its badly battered legal and financial institutions, improve its political geography, develop its urban and village settlements, and rapidly build its telecommunications and transportation networks. Being weak and undisciplined, the Iranian state denies itself of the economic leadership legitimacy and takes refuge in a private sector that is even weaker and even less disciplined.

Hanging between the public and private sector, Iran’s economy is increasingly controlled by corrupt oligarchies. To reverse course, Rouhani must set bold and unconventional course, get the masses behind him and mobilize the nation’s economic assets towards an economic revolution. Waiting for the sanctions to be lifted, oil income to increase or foreign investment to arrive will only waste time and move Iran closer to an economic cliff. The time has come for real change towards a better Iran, and unless Rouhani listens to the voice of balanced economic reasoning and the rest of the world’s experiences with economic development, he will do no better than his predecessor.

Hooshang Amirahmadi is a professor and former director of the Center for Middle Eastern Studies at Rutgers University. He holds a PhD from Cornell University and is the founder and president of the American Iranian Council. He is also a Senior Associate Member at Oxford.