Rubio Has No One to Blame but Himself 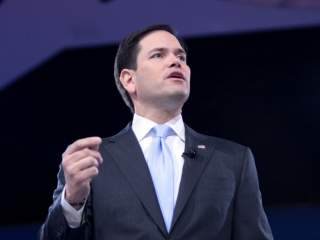 When Marco Rubio dropped out of the presidential race Tuesday night, he clearly hoped to accomplish the same thing Ronald Reagan did with his speech endorsing Gerald Ford at the 1976 Republican National Convention: convince his party they had chosen the wrong guy.

Reagan didn’t even attempt to contrast himself as sharply with Ford as Rubio did with the victorious Donald Trump. The Florida senator’s speech was about optimism versus fear, timeless principles versus the current ugly political climate, the establishment he was seen as representing versus the vibrant conservative movement he preferred to champion.

An attractive message at a time when people are punching each other in the face at the winning candidate’s rallies, delivered by a relatively young Latino politician as a mild rebuke to an aging, angry white billionaire on the verge of leading a party that many argue has already gone as far as aging and angry white voters can take it.

Like Americans who once hoped Barack Obama’s soaring speeches would heal the nation’s divisions, Rubio’s supporters ultimately invested too much in their candidate’s capacity to inspire with such words and his biography. In the end, for all of Rubio’s facility with big ideas he failed at the small things that make political success possible: building a ground game, connecting with constituents, identifying states he could target and win.

The defining moments of Rubio’s career were breaking with conservatives on immigration via the Gang of Eight and breaking with Floridians after they sent him to the Senate. The voters in his home state understood he had used them as a stepping stone to higher office and his reliance on the Florida primary to construct a path to the nomination was as unrealistic as if Chris Christie had banked his campaign on the New Jersey primary despite reams of polling showing his constituents were actually irritated by his presidential run.

Rubio deserves credit for pushing back against Trump's outlandish rhetoric, though it should be noted the senator did so most forcefully when his own campaign was closer to its end than the beginning. But the GOP wasn’t a polite dinner party until Trump showed up, put his feet on the table and chewed with his mouth open. Rubio’s own table manners were not always above reproach.

The man now urging Republicans not to give into their fears was not so long ago telling them “nothing matters if we aren’t safe.” The senator who spoke eloquently about the need to differentiate the Islamic world’s undeniable problems with radicalism and terror from blanket hostility to Muslims wondered why the president had to make such a politically correct fuss at a mosque.

The vanquished presidential candidate who warns against hating people over policy disagreements has devoted a good part of his career to saying people with whom he has foreign policy disagreements are coddling terrorists and tyrants or apologizing for America. He ignores the extent to which some of the actual grassroots support for the wars he has championed, and which Trump has often opposed, relied less on high-minded arguments about democracy promotion and the freedom agenda than the paranoias that Trump is now stoking on behalf of an agenda less to Rubio’s liking.

Like Lindsey Graham, Rubio sometimes seems to believe a leader must be more careful with his words than with this country’s bombs, that Muslims will overlook an errant drone strike or collateral damage in a war but not unkind or uncouth remarks.

Now it falls to John Kasich to try to be the Republican presidential candidate who sounds the least like Trump, while Ted Cruz competes with him from the right. Rubio was trying to do both things with eloquence, charm and vigor, but ultimately without success.