Twilight of the Neoconservatives 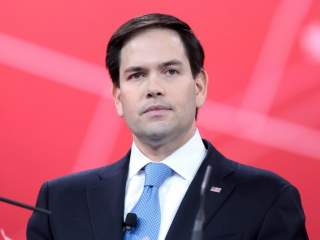 There you have it. After months of Marco Rubio’s presidential campaign focusing inordinate amounts of money and attention on Florida, fueled by spokesman Alex Conant’s optimistic Sunshine State forecasts and punctuated by the candidate’s specious insistence that this was a bellwether for the Republican nomination, the butterfly ballots have at last been counted. The state’s ruthless primary mechanism—to the victor go the spoils, with nothing for second place—swept all ninety-nine of its delegates to Donald Trump. On the Ides of March, Floridians gave their native son a hard frontal stab. Out of sixty-seven counties, Rubio won only his home, Miami-Dade.

Last night was Insuperable Tuesday for Rubio as he took a beating across the electoral map. He placed fourth in every contest except his home state. In Ohio, he won less than 3 percent of the vote. But it was Florida where Rubio hung his hopes, and when he lost there, he emerged to a podium that appeared to be located in his garage to suspend his campaign. As the feeble lighting shaded his face with some rare five o’clock shadow, he lamented that this wasn’t “the year for a hopeful and optimistic message about our future.”

“I ask the American people, do not give into the fear. Do not give into the frustration,” Rubio said. Elsewhere in Florida, the maestro of those emotions was preparing to give his victory address, where he would accuse those who’d lowballed his vote totals of not understanding “basic physics.” Trump had shaken up the race once again. He won every state last night except Ohio and possibly Missouri, where he and Cruz are still deadlocked.

There will be plenty to learn from the Rubio autopsy, which the media is already conducting with its usual splattering indelicacy. The most interesting takeaway is that the Republican race has lost its only neoconservative. Rubio wanted to tear up the nuclear deal with Iran, hike defense spending by $1 trillion over the next decade and brush aside privacy concerns that have been raised over the NSA’s metadata collection. Now, the candidate whose appropriation of neoconservative scenery was so thorough that his campaign slogan was literally the name of a pro-Iraq War group sans two words is gone. For the intellectual school that sculpted GOP policy throughout much of the 2000s, it’s a dramatic tumble from influence.

Neoconservatives initially liked their chances in this election. Back when Rand Paul was petering out, hawkish commentators declared that the GOP flirtation with libertarianism was over, and that Republican voters, fuming over the barbarism of the Islamic State, were ready for a return to the “foreign policy of Ronald Reagan,” by which they meant the foreign policy of Woodrow Wilson. Now they’re faced with a presidential field that’s manifestly less interventionist than they are. The most hawkish candidate still standing, Senator Ted Cruz, is also one of the most dovish Republicans in the Senate, having opposed arms for the Syrian rebels and stood with Rand Paul on issues of surveillance. John Kasich, the military budget watchdog, thinks we need to stay out of Middle Eastern civil wars. And Donald Trump has repudiated George W. Bush’s foreign policy in the most full-throated terms imaginable.

That’s not to say the Republican Party is skidding back in time towards Hiram Johnson. Just last week, Kasich pledged to establish a no-fly zone in Syria and if necessary shoot down Russian planes (too late!). But this is still the least hawkish Republican presidential field since 9/11. The conservative base’s reaction to ISIS—go to war sparingly, but make the sand glow when you do—was far more cold-eyed than the neocons anticipated.

As for the rest of the race, Ted Cruz once again finds himself in a pickle. The Texas senator has been trying to winnow the field to himself and Donald Trump, and even went so far as to spend money in Florida, a state he had no chance of winning, in the hopes of hastening Rubio’s exit. Now Rubio has finally departed and Cruz finds himself back where he started: in a three-way race caught between Trump and an establishment-flavored candidate. John Kasich won sixty-six delegates in Ohio, which could gas his campaign for another month to come. For those hell-bent on sinking Trump, Cleveland is starting to look very attractive.