Russia’s and China’s Interest in Cold Svalbard Heats Up 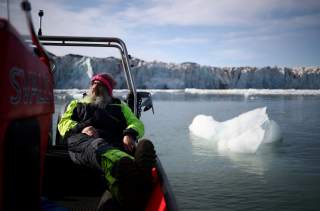 When security matters in the Arctic Ocean are discussed, especially in the context of NATO and Russia, it is normally Greenland and Iceland which get a mention. However, Svalbard, a non-militarized Norwegian archipelago some five hundred nautical miles off the northern coast of Norway, should not be ignored especially given how active Russia and China are in that remote area.

This week marks the one-hundredth anniversary of the signing of the Svalbard Treaty in 1920. As part of the various peace settlements after World War I, this treaty granted Norway sovereignty over these islands.

Svalbard is located well above the Arctic Circle. Longyearbyen is its capital and largest city. It has a population of twenty-one hundred. Svalbard is also home to Ny Ålesund, the world’s northernmost permanently inhabited place (with a population of thirty-five).

Although Norway was awarded sovereignty, the terms of the Svalbard Treaty allowed any of the treaty’s signatories to have non-discriminatory access to the islands’ fishing, hunting, and natural resources. These countries included major powers, such as Russia, the United States, the UK, and China, as well as countries far from the Arctic, such as Saudi Arabia, South Africa, and even Afghanistan. In total, some forty-six countries enjoy equal access to Svalbard’s natural resources.

Even with the rights offered to the treaty’s signatories, the Norwegian government is crystal clear in its position on the status of the islands. As Minister of Foreign Affairs Ine Eriksen Søreide and Minister of Justice Monica Mæland recently wrote in an article published in various Norwegian newspapers to mark the centenary of the Svalbard Treaty: Today, Norwegian sovereignty is undisputed and Svalbard is Norwegian just as much as any region on the mainland.

Even so, both Russia and China have taken advantage of their access to Svalbard. At the height of the Cold War, Russians accounted for two-thirds of Svalbard’s population, totaling two thousand people in the 1960s, a number that has declined to under five hundred today.

Russia has been mining coal on Svalbard since 1913, but it was not until the late 1920s that it did so in any meaningful and commercial way. During the Cold War, the Soviet Union maintained three settlements on Svalbard. One at Grumant was closed in 1961. Another at Pyramiden was closed in 1998 but still holds the record of the northernmost statue of Lenin in the world.

The last remaining settlement, located in Barentsburg, is still active today but depends on Russia for food and other provisions. Curiously, considering the remoteness of its location, Barentsburg boosts a Russian consulate. Travelers there find their mobile phone switches to a Russian carrier.

These settlements have always been more about national prestige for Russia and never produced that much coal. Even the settlement in Barentsburg today only produces enough coal to sustain itself.

Subject to the rights and duties resulting from the admission of Norway to the League of Nations, Norway undertakes not to create nor to allow the establishment of any naval base in the territories specified in Article 1 and not to construct any fortification in the said territories, which may never be used for warlike purposes. The non-militarized nature of the islands is under constant debate.

Russia accuses Norway of violating this clause in the treaty when Norwegian coast guard ships call into port or when the occasional Norwegian air force cargo planes land at Longbeartyan airport. Norway contests these accusations by stating that these visits are in line with the limitations outlined in Article 9 of the treaty.

During the Cold War, there was concern that the Soviets could use the settlements to preposition military hardware in violation of the terms laid out in the Svalbard Treaty.

Even in more recent times, Russia blurs the lines. In 2015, just after the Ukraine crisis got underway, Russia’s Deputy Prime Minister Dimitry Rogozin conducted a surprise visit to Longyearbyen airport and then went on to Barentsburg, even though he was listed as being under sanctions and banned from entering Norway. In 2016, Chechen special forces landed at Longyearbyen airport en route to Russia’s Barneo ice-base in the Arctic. At the time, the Norwegian government protested to show its displeasure.

Russia and China are active in Svalbard, and the United States cannot miss out. As a recent report on Arctic Security from The Heritage Foundation suggested, U.S. military planners should better recognize the geostrategic importance of Svalbard’s location and during a time of war consider Svalbard as one of three Arctic Forward Operating Bases in the defense of the North American continent (the other two being Greenland and Iceland).

Also, the report states that the United States should consider the use of Svalbard for any required scientific needs. Due to its location in the Arctic region and its particular environmental conditions, Svalbard is very attractive for scientific research. In the past, the Department of Defense has conducted research there, and it should consider doing so in the future if the need arises. This is an excellent way for the United States to “fly the flag” in a region with significant geopolitical importance.

Even though Svalbard is currently demilitarized, one cannot pretend that in the event of a major outbreak of conflict in the Arctic region that the archipelago would not be front and center in any military campaign.

U.S. military planners must always have this reality in the back of their minds. This is why the U.S.-Norwegian relationship is so important. At a time when Russia is showing so much interest in Svalbard, America can’t afford to neglect that relationship.