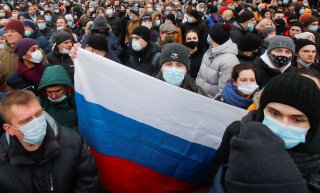 When Donald Trump became president, he vowed to transform U.S. Russia policy, and he did. He refused to characterize the United States as morally superior to Russia. He spoke admiringly of Vladimir Putin. As in other parts of the world, Trump eschewed democracy promotion in Russia—most effectively by placing the democratic bona fides of the United States in question at home. With his enthusiasm for Brexit and his disdain for the European Union, Trump implied that the future direction of international affairs was not the rule of law and not the give-and-take of open societies but some version of authoritarian nationalism. German Chancellor Angela Merkel was the pariah in his eyes and Putin the bold pioneer.

Three days after Trump left office, Russia has erupted. Having survived a poisoning, the prominent opposition figure Alexei Navalny recuperated in Germany, where he must have been putting the finishing touches on a video that reveals the extraordinary—and extraordinarily vulgar—wealth of Putin and his cronies. The video was released shortly after Navalny’s return to Russia, a return he knew would result in his arrest. The video and arrest generated a massive wave of protests, as if to demystify Putin in two separate ways: Putin the thief rather than Putin the geopolitical maestro; and Putin the lazy politician, not the impregnable tsar, whose hold on Russian youth (or perhaps on the capital city) cannot compare with Navalny’s.

The revival of potent pro-democracy opposition to Putin after four years of Donald Trump proves an important point about U.S.-Russian relations. The United States is not the tail wagging the Russian dog. (One might add that Biden’s election in 2020 shows that Russia is not the tail wagging the American dog.) The United States is not the key reference point for Russian politics. The democracy promoters of the Obama administration did not get Russian democracy. The autocracy promoters of the Trump administration did not get a smoothly functioning Russian autocracy. This reality should encourage a certain humility in the Biden administration or it should encourage the acknowledgement that the fate of Russia’s domestic politics lies in Russians’ hands. Biden administration policy should be focused on the foreign-policy fallout from the Navalny-Putin duel, among which the likely consequence is a deteriorating U.S.-Russian relationship.

Navalny has a difficult road ahead of him. He is valued in Russia as an honest man, post-Soviet in affect (like Ukraine’s president, Volodymyr Zelensky) and as a brilliant investigative journalist. His revelations, well-tailored for social media, illustrate the venality and shabbiness of Putin and his coterie, something Russians would be aware of without Navalny but something he does not allow them to forget. Yet Navalny does not head a real movement, and a much smaller number of Russians than watch his videos would actually like to see him in power. An even smaller constituency would wish for the violent overthrow of Putin’s government by Navalny or anyone else. Navalny is—most acutely—a threat to Putin’s ego.

In sum, Navalny’s arrival in Moscow on a budget airline (from Berlin) was not the equivalent of Vladimir Lenin’s arrival via Germany on a sealed train, the spark that ignited the Bolshevik Revolution in 1917. The entire episode, starting with the poisoning of Navalny in August 2020, reflects less on Navalny’s political capabilities than it does on Putin’s heavy hand and the degree to which Putin must have been spooked by ongoing protests in Belarus, which began in the summer of 2020. Putin has taken a small opponent, not well known outside of Russia, and given him the potential to be a martyr, a John the Baptist in the creation of a post-Putin Russia. Putin, the proverbial chess player, was not thinking more than one move ahead in all of this. Nor were his legendary intelligence agencies. Navalny’s incriminating video somehow slipped through their fingers.

Putin may conclude that Navalny is essentially an internal problem. If so, Putin will not recalibrate his foreign policy because of Navalny. If problems ensuing from Navalny’s arrest and video do compel Putin to change gears, it will not be toward greater conciliation with the West. He will harden his position on Ukraine and Belarus, in part to hinder Russians from seeing these countries as examples of Western success and in part to prevent the perception of Russian weakness in Washington, in Berlin, and (for different reasons) in Beijing. Ukraine does not present Putin with many attractive options. Belarus, by contrast, could be the place Russia and the West confront one another in the next year or two.

The Biden administration has every right to affirm democratic values internationally. It can state its preference for free elections in Russia, request that Navalny be given a fair trial, and argue that Russians should be able to protest without police interference. It should watch its own rhetoric carefully, however, and not give the impression that the United States can guarantee Russians’ rights, which it obviously cannot. And it should not explicitly back Navalny because there is no meaningful way of doing so without adhering to the logic of regime change. Russia is no less a nuclear power in 2021 than it was on the eve of the Cuban Missile Crisis.

Most importantly, the Biden administration should be strategic in relation to Ukraine and Belarus. In Ukraine, it should support the reforms that Vice President Biden worked on between 2014 and 2016. It would be foolish, though, to regard Ukraine as a democratic lever that could be used to pry Russia free from authoritarian rule. That would be an incentive for Putin to further destabilize Ukraine, possibly by moving the line of contact between the Ukrainian and Russian militaries to the West or by using cyber or other tools to topple the Ukrainian government. A very tenuous regional order has prevailed since the battles of 2014. It is frustratingly imperfect. It is still preferable to the many kinds of disorder Russia could bring to Ukraine.

In Belarus, the Biden administration should be ready for Russian action. The probability of a leader emerging there who would have the legitimacy the West would want him or her to have and who would be satisfactory to Putin is vanishingly small. Maybe Lukashenko will muddle through. If he cannot, Putin could seize the initiative, install a puppet and begin the formal integration of Belarus into Russia. This scenario should be actively and immediately discussed in Washington, at NATO, and with U.S. allies in Europe. President Biden has already dismissed the idea of a reset with Russia: Russian and American diplomats will not make the peace if a crisis unfolds in Belarus, and neither side would want to go to war. The West can better its position in these unsteady times by depriving Putin of his one great advantage in Ukraine in 2014, which was not military but psychological. This was the element of surprise.