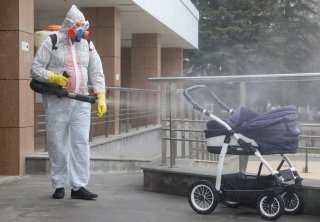 Over the past two weeks, Russia’s leadership has started to take the coronavirus pandemic seriously. As of April 9, 11,917 Russians were reported to be infected, based on over a million conducted tests, and the numbers are doubling every two to three days. Key national experts are predicting the timing of Russia’s peak for April 17–21, with infections not falling off significantly until early to mid-June. The government appears to be bracing for the worst. Currently, twenty thousand hospital beds, both public and private, are being prepared in Moscow alone.

So far, Russia’s epidemic is heavily Moscow-centric, but it’s shifting noticeably to hot spots in other parts of the country. The identified case load outside Moscow has climbed from 29 percent to 34 percent of all infections just over the last few days, and that’s with testing activity skewed heavily toward Moscow and a few of the natural resource-rich regions of Siberia and the Far East. The relatively low number of confirmed cases in St. Petersburg—408, as of April 10—may have something to do with only forty thousand tests having been performed there.

In terms of sheer numbers of reported tests performed and per-capita coverage of testing, Russia is one of the top countries. The quality and coverage of that testing, however, is unclear. Tests are being processed at 190 public laboratories around the country as well as a handful of private labs and clinics. New Russian-produced tests are said to be under development to deliver results more rapidly and precisely. There are numerous anecdotal reports, however, of people hospitalized with pneumonia without being tested for coronavirus, even though their conditions clearly indicate they might be infected. A Higher School of Economics survey conducted on April 4–5 found that half of Russians think the authorities are understating the actual number of infected people, while only 12 percent find the official statistics reliable.

It's not that the Kremlin is systematically and maliciously manipulating the books, taking in one set of numbers and then reporting out something different. The reality is surely more nuanced, having to do with factors like the criteria established for testing, and with the incentive structure at the lower levels of the system to report bad news. Many hospital heads are likely facing conflicting impulses at this point: they desperately need additional resources to handle existing or potential coronavirus caseloads, yet they don’t want to call negative attention to themselves. One doctor, active in a physicians’ union that has long been critical of shortages in the health system, was detained overnight last week for publicly complaining about the lack of personal protective equipment for staff in her hospital (she live-Tweeted her arrest).

The government’s official coronavirus website features a list of strict criteria for testing, covering people with symptoms who have traveled abroad and their contacts, and symptomatic people over the age of sixty-five—but not younger people who haven’t traveled but are showing signs of illness. The site also states that “a single test is not sufficient to make a diagnosis,” requiring a second or even third positive result before the infection is confirmed. This implies that there may be a significant backlog of infected people awaiting the results of their second or third tests before they show up in the reported numbers—with each test requiring a processing time of multiple days—or that some have died before becoming part of the official count. It’s also not clear how many of the reported million conducted tests are second or third tests on the same person.

Much of Russia’s current situation doesn’t differentiate it enormously from the rest of the world. Most countries’ official tallies are presumed to lag behind the actual numbers because of shortcomings in a testing capacity. The government at all levels everywhere is scrambling to deploy adequate stocks of ventilators and personal protective equipment. Ordinary people are taking meals to heroic hospital staff, struggling with home-schooling their kids, and finding creative ways to pass the time during the quarantine. But some of Russia’s specifics, especially its geography, infrastructure, pre-existing health status, and demographics, create unique advantages and vulnerabilities in the fight against the pandemic.

Geography: Russia’s large number of spread-out urban areas and low population density ease the task of physical distancing. Its highly centralized transport system—with half of all flights across just five cities: Moscow, St. Petersburg, Krasnodar, Simferopol, and Sochi—concentrates many passengers in relatively few places (bad), but facilitates quick intervention to stop the spread of disease (good). There’s concern, though, that this advantage may have been squandered. Russia’s regions have been given wide autonomy in determining their own stay-at-home and other restrictions. Some have been counterproductive, prompting situations where residents form crowded in-person queues for work and other permits, risking further spread of the virus. Too many potentially infected Muscovites have fled the capital for other parts of the country in their private cars, circumventing closures of public transportation. On April 6, some regions in Siberia and the Far East introduced fourteen-day quarantines for anyone arriving from Moscow or St. Petersburg, but it will be a while before we know how far the virus had already spread.

Health care infrastructure and experience: Russia has always had a disproportionately high number of doctors, hospitals, and hospital beds. Surge capacity isn’t a problem. Quality is. An array of national programs has poured hundreds of millions of dollars into the health system since the mid-2000s; in parts of many larger cities, the level of care is a night-and-day contrast to what it was just a decade ago. Despite these investments, however, much of Russia’s hospital equipment is still old and shoddy. Medical personnel are not uniformly well trained, and there may not be enough of the right kinds of skills (anesthesiologists, respiratory therapists, lab technicians, intensive care nursing staff) to meet coronavirus treatment needs. Russian physicians are also relatively old, worrisome in terms of their own vulnerability to coronavirus infection (a real possibility, given shortages of personal protective equipment) and the likelihood that they’ve received modern training.

Russia doesn’t rely on large, multi-profile hospitals as is the case in the United States. Instead, most inpatient facilities are specialized, such as infectious disease hospitals, maternity hospitals, cardiovascular centers, etc. Rightly, most of the last decade’s modernization focus has been in areas impacting the country’s urgent demographic challenges: maternity and neonatal care facilities, to increase the birth rate; and non-communicable disease (heart disease, stroke, cancer) centers, to tackle the burden of premature mortality among working-age men. It may be challenging to make the shift, in terms of personnel, infrastructure, and equipment, to gear up against the current infectious disease pandemic—and equally importantly, to break down the administrative and bureaucratic silos between these facilities and sub-sectors, replacing predispositions for competition and turf protection with communication and collaboration.

Many of the localized outbreaks of coronavirus in the United States and other parts of the world have centered on long-term care institutions, where vulnerable older people are congregated. The United States currently has about 1.5 million people living in these kinds of residential elder-care settings, compared with only around 250,000 in 1,500 public facilities in Russia (as of 2016). Russians avoid these institutions, as their reputations for quality and staffing are poor. The lack of options for quality residential care for aging populations, normally a weakness, may serve as one of Russia’s strengths against this pandemic.

Another source of hope: because of the low levels of technology available during the Soviet period not only for health care but across the entire economy, Russian scientists and engineers and physicians had to become ingeniously creative in producing results using whatever materials were at hand. With this kind of skill, they were sometimes able to achieve sophisticated performance parameters using relatively low-tech raw materials. These MacGyver-esque habits—solving complicated problems with paper clips and rubber bands—persist, and they may serve Russian emergency and intensive care facilities well during this crisis. It will be good news for Russian coronavirus patients if their hospital techs can mimic the kinds of inventions seen in Italy, where doctors created a 3D-printed valve to convert a scuba mark into a ventilator mask, or Spain, where windshield wipers have been used to transform manual resuscitation bags into automated ventilators.

Demography and health conditions: Although evidence is still emerging, it is widely assumed that advanced age produces increased vulnerability to coronavirus infection and to serious disease. Overall, Russia’s population age structure has been growing older over the last decade, with pensioners making up 22.3 percent of the population in 2010 but 25.9 percent now. There is also data, however, indicating that coronavirus impacts men more severely than women; it causes more infected men than infected women to progress to serious respiratory distress and therefore produces higher fatality rates among men than women. Due to many years’ worth of high premature male mortality, there are many more older women in Russia than older men (men die younger). The existence of relatively fewer vulnerable older men could help suppress mortality among Russians overall.