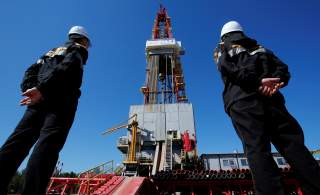 Russia’s energy prospects looked bleak just a few years ago. The European Union, Russia’s largest energy customer, was moving to distance itself from Moscow over the latter’s annexation of Crimea and support for Eastern Ukrainian separatists. Russia was trying to break into the Chinese energy market and meeting significant difficulties along the way. Finally, the U.S. shale revolution threatened to further undermine Russia’s place in the global oil markets.

This year’s Russian Energy Week forum in Moscow took place under considerably different circumstances. As foreign officials and business people descended on the Russian capital last week, the Kremlin had reason to be satisfied. Notwithstanding fervent opposition from Washington and several Eastern European countries, Russia is set to complete two new gas supply pipelines to Europe by the end of this year. Moscow is also expected to launch its long-awaited Power of Siberia gas pipeline to China before the start of 2020.

Some of Washington’s policies have inadvertently provided Moscow with new energy opportunities to expand its energy influence. Sanctions against Venezuela and Iran have weakened prominent Russian competitors in the oil market. Moreover, as the U.S.-China trade war continues to intensify, Beijing is increasingly looking to its northern neighbor as a reliable energy supplier.

In his speech at the forum, Russian president Vladimir Putin sought to both reassure and warn Moscow’s European gas clients. The Russian leader pledged that his country would continue to demonstrate “a responsible, businesslike approach in relations with our long-standing partners in Europe” regardless of the disagreements between Moscow and Brussels.

Putin, however, also railed against Europe’s “dirty tricks” against Russian gas companies and stated that Russia would look to sell its gas elsewhere if the continent continued to “keep energy hostage to political differences.”

“Naturally, we receive new impetuses to develop cooperation with those that do not support this logic—the logic of dishonest competition,” he said. “The demand for hydrocarbons is growing in Asia, more quickly than in Europe.”

For Russia, the energy pivot to China is even more so about geopolitics than about economics. Alexander Lukin, a China scholar at the Higher School of Economics, told me that the Ukraine crisis convinced Moscow that it could no longer rely on Europe as its primary energy customer without making itself politically vulnerable.

“All of Russia’s oil and gas pipelines, even during the Cold War, were built to Europe. When Europe began using this fact for political pressure, it turned out that this energy dependence is a very dangerous thing,” he said.

Europe has also talked of lessening its energy reliance on Moscow since the outbreak of the Ukraine crisis. Shortly after Russia’s annexation of Crimea in March 2014, the European Council called upon European Union member states to diversify gas suppliers in an effort to wean the continent off of Russian gas.

Notwithstanding Moscow and Brussel’s mutual suspicion, however, Russia’s gas exports to Europe have actually increased in recent years. Gazprom’s gas sales to Europe and its share of the continent’s gas market reached record highs in 2018. Once the Nord Strom 2 and Turkstream pipelines become active later this year, Russia will deliver an additional 86.5 billion cubic metres annually to Europe.

Chris Weafer, a senior partner at Macro Advisory, told me that despite political tensions between Moscow and Brussels, Europe has little choice but to increase its consumption of Russian gas. He explained that as European governments work to cut their CO2 emissions, they are gradually supplanting coal for gas and renewable energy sources. With European domestic gas production on the decline, the continent’s energy needs can only be met by importing more gas.

“Beyond the political rhetoric, there is an energy pragmatism that recognizes that Europe needs to import a lot more gas and a lot of that is going to come from Russia,” Weafer said.

Although Washington has long pushed its European allies to move away from Russian gas, some of its own policies have provided the Russian energy sector with a boost. In particular, its sanctions against Caracas and Tehran have prompted many former customers of Venezuelan and Iranian oil to turn to Moscow instead.

According to some estimates, U.S. sanctions have provided Russian oil companies with $905 million in extra profits. Even the United States itself has increased its consumption of Russian gas following the imposition of sanctions against Venezuela. Russian oil exports to the United States reached a six-year high in the first quarter of 2019.

Weafer explained that Russia was well-positioned to offer itself as an alternative supplier because it is a heavy crude oil producer, just like Venezuela and Iran.

“Venezuelan and Iranian oil is of a similar density and type as Russian oil. So, the fact that they have been taken out of the market means that there are ready buyers for Russian oil,” he said.

The U.S.-China trade war has also presented Russian energy producers with an opportunity to increase their share of the Chinese market. After Beijing placed a retaliatory tariff on American LNG producers, Chinese state energy companies moved to purchase shares in Russian LNG projects in the Arctic.

Lukin told me that Moscow, as a close partner of Beijing, is well placed to benefit from trade tensions between the United States and Russia.

“Russia is a friendly country and China does not have any problems with it, so China is trying to develop relations with Russia—first and foremost in the energy sector, but also for other goods,” he said.

As 2019 comes to a close, Russia’s standing in the global energy markets appears stronger than it has been in years. Moscow’s position in Europe remains strong and its pivot to China is starting to deliver meaningful dividends. Ironically, it may have the United States partially to thank for its recent success.