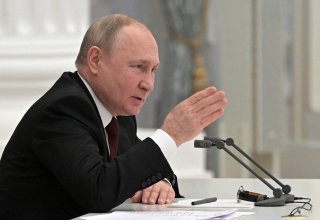 Something very strange is going on with Vladimir Putin. Since 1999, we’ve come to know a different Putin; a man justifiably admired (and feared) for his political acumen, support, and patronage of Russian strategic innovation and military professionalization, and for his sequential victories in Russian military interventions. But on February 24, we woke up to an entirely different Putin; a Putin forcing the Russian Federation into a series of strategic and public relations blunders of disastrous proportions. For those of us who’ve studied Russia’s history, its military, and its foreign policy for decades, this second Putin is a mystery.

To review, like many of us, Putin grew up in a world divided into two hostile and barely pragmatic camps. On the U.S. side was NATO; and the “deal” struck both in economic and military terms with post-World War II NATO was that it was in the U.S. interest to pay a greater share of the burden both of Europe’s economic recovery and its security. Grand strategy for the U.S.-led alliance was something called “containment,” first outlined by the brilliant American diplomat and Soviet-Russian expert, George F. Kennan. Most Americans don’t know this, but by 1945 Americans had become war-weary, and opposition to the war was growing. The surrender of the Third Reich in the spring of 1945, and of the Empire of Japan in August, was followed by a wave of popular demand to demobilize and “get our boys home.” Against at times bitter opposition from conservatives demanding “rollback”—the use of existing U.S. and Allied military forces to force Stalin’s Red Army back to the Soviet Union’s previous borders, the United States and its allies settled into a posture that would characterize the Cold War.

On the Soviet side was the Warsaw Pact; and let’s be blunt about the root of our current problem with Putin and Russia’s invasion of Ukraine. At Yalta in 1943, the Allies made a deal with the Devil: Poland, Hungary, Austria, Czechoslovakia, Romania, and Yugoslavia were to be permitted “free and fair elections” after the war, regardless of whose armed forces ended up with occupation responsibilities. In every jurisdiction occupied by the Red Army, Stalin picked the candidates, and allowed citizens to ‘freely and fairly vote’ for either of his choices.

Having already demobilized, and facing war-weary—and in Europe’s case, hungry—citizens, the Allies were forced to accept the drawing of what Britain’s Winston Churchill famously called an “iron curtain” across Europe. Effectively, a root principle of international law since the seventeenth century—the idea that sovereignty meant each state was equal legally, and free to choose its own faith and form of government—was sacrificed in the face of a very real possibility of World War III.

The Soviets understood that this de facto sphere of interest was their guarantee (in perpetuity) that they wouldn’t be invaded yet again (Napoleon, 1812; United States, 1918; the Third Reich, 1941). It was also a way to extend Soviet rule and aid Soviet economic recovery without having to fight another war.

This gets us to a contemporary dilemma that makes diplomacy as important as it is complicated: the dual-use problem. Kennan understood that there were two lenses through which we could view Stalin’s insistence on a Soviet sphere of interest to his west. First, there was insecurity—an historical appreciation of Soviet policy. Second, there was ideology—an ideological appreciation of Soviet policy as aggressive. We understand, intuitively, that it’s possible—even likely—that a leader like Stalin might be both insecure and aggressive. But often in debates, we love to reduce our questions to “either-or.” Kennan’s argument for containment, which ultimately (and narrowly) carried the day, was that Soviet foreign policy to its west was driven mainly by insecurity rather than ideology.

But the same problem crops up across a host of other examples and issue domains. Is Iran more insecure than ideologically driven? How about Israel? Do we base U.S. foreign policy toward Iran on the assumption that it’s insecure or aggressive? Certainly, if I were an Iranian statesman, I’d have an easy time pointing to justification for insecurity; and in particular the problem of what happens to states with no nuclear weapons when threatened with forced regime change (as in Serbia, 1999; Afghanistan, 2001; Iraq, 2003; Libya, 2011). Since 1979, and in particular, as a result of the hostage crisis that followed the fall of the shah, U.S. foreign policy has pretty much defaulted to the view that Iran is pathologically “aggressive.” It is now, but it didn’t have to be. This self-fulfilling prophecy problem conveniently spares Americans the discomfort of having to review their own misdeeds and blunders in Iran since the 1950s.

No one should argue that Soviet, Iranian, or now Russian insecurity justifies the resort to military intervention or war. But if we’re after explanations, we should recognize that the United States’ past foreign policies have made it at least reasonable for these states to fear forced regime change or invasion.

Putin’s insecurity, historically based, is certainly not unreasonable on its face. I should add that from the mid-1990s on, Russian diplomats and Putin himself, politely, quietly, and consistently alerted the United States and its allies that NATO’s continued existence puzzled them, and that its expansion eastward very much threatened them. These alerts went largely ignored by the Bill Clinton administration, and NATO’s expansion accelerated dramatically under the George W. Bush administration.

But again, we’re faced with a “dual-use” problem. Putin is not only the head of state of a state that is reasonably insecure, but he is also a brutal and profoundly corrupt dictator. As a result, in his view, it is not sufficient to simply prevent the Baltic states, Belarus, Ukraine, and the “Stans” from building sufficient military capacity to resist Russian political or economic demands. His agenda includes ensuring that no functioning economy and no democracy emerge in these states. Russian foreign policy, in other words, insists that states on its periphery must be led by dictators of the Belarussian Lukashenko model: corrupt, brutal, and wholly subservient to Moscow’s whims.

On the few occasions, our first Putin has used armed force (as in Chechnya from 1999–2008; or Georgia in 2008), he has done so along classic Soviet lines: no respect for noncombatant immunity. On the contrary, hospitals and foreign aid workers are specifically targeted; as are any journalists. “Safe corridors” are agreed to, but civilians attempting to access them are then strafed or shelled by Russian armed forces; and young men traveling with their families are separated out, tortured, and then murdered. Thermobaric weapons and cluster munitions are used in urban areas.

But under our first Putin’s rule, Russian military brutality had always been directed against “others.” That is, until 2014, and Russian military intervention in Crimea, the Donbas, and Luhansk, with Putin recently characterizing Ukrainians and Russians as “one people.”

And here we witness the advent of a new Putin, our mystery Putin. The question is, what is going on? Why abandon a foreign and military policy that was working brilliantly both to maintain Putin’s own personal power and fantastic wealth, and to weaken potential adversaries both at home and abroad? Why start a war in Europe when war, over the past seventy years, has become so much less effective and so much more costly and risky? This just isn’t like him.

Never in his entire brilliant career has Putin been so wrong, and so wrong on all counts. In trying to understand this mystery Putin, we are left with only one of two unhappy possibilities.

Either Putin did and does understand how much this war will cost Russia and him personally, and he fears something much worse (or wants something he couldn’t get otherwise), or he has, for one reason or another, made a serious error in judgment. It should go without saying that it may take some time for us to learn which of these two possibilities is the right explanation; I also think we can agree both are equally scary. Given how much Russians and Ukrainians are going to be hurt by Putin’s invasion whether Ukraine surrenders or not, whatever he might want or fear that justifies war in Ukraine is hard for us to conjure.