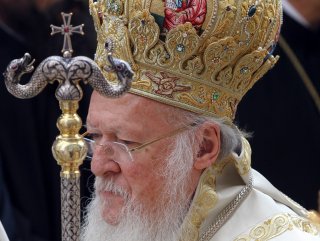 Bartholomew I, the Ecumenical Patriarch of Constantinople, on November 7 returned to his seat in Istanbul following a sixteen-day visit to the United States. Bartholomew is the spiritual leader of nearly 300 million Eastern Orthodox Christians worldwide and the first among equals of Orthodox church leaders. During his trip, Bartholomew received an honorary doctorate at Notre Dame University and met with U.S. president Joe Biden at the White House.

The trip wasn’t without any mishaps though. The eighty-one-year-old patriarch landed in the hospital twice, adding to concerns over his health as he celebrates thirty years on the ecumenical throne. His meetings with top U.S. officials also made him a target of the Kremlin’s disinformation campaigns. Pro-Russian websites claimed that the patriarch insulted other Orthodox hierarchs and that he teamed up with the U.S. State Department to “invade the Ukrainian Church territory.”

Such allegations are categorically false, much like Moscow’s earlier smear campaigns against Bartholomew. Shortly after Turkey’s failed coup attempt in 2016, the pro-Kremlin Oriental Review published an article—falsely labeling Arthur Hughes, former U.S. ambassador to Yemen, as the author—that purported to implicate Bartholomew alongside the CIA as an architect of the coup. Moscow, nevertheless, hopes that such lies, which Turkey’s pro-government media also amplify, will tarnish Bartholomew’s image and paint him as a mere tool of the West.

The Ecumenical Patriarchate, based in Istanbul since the fourth century, carries significant geopolitical weight, which puts it in the crosshairs of Orthodox-majority Russia. Given that a majority of the world’s Orthodox Christians live in former Iron Curtain countries, many of which have joined or would like to join NATO to escape the Kremlin’s domination, Russian-language journalists have long alleged that the Ecumenical Patriarch is a proxy for American and NATO interests.

The Ecumenical Patriarchate has managed to carry on despite Russia’s attempts to undermine the institution. Moscow’s interference in the Orthodox world is not limited to attacks on the Ecumenical Patriarchate’s seat in Istanbul, such as a multi-year attempt by Russian hackers to steal the emails of Bartholomew’s senior aides. Since its intervention in the Syrian Civil War in 2015, Moscow has also portrayed itself as a protector of the Middle East’s dwindling Orthodox Christian minority while accusing the Ecumenical Patriarchate of being in the CIA’s hands. In Lebanon, over the last decade, Russia sponsored the now-defunct pro-Orthodox Levant Party and opened a cultural center in 2018 in predominantly Christian Mount Lebanon. Meanwhile, in Syria, Russian president Vladimir Putin has extended his influence over the patriarchate of Antioch, the spiritual seat of the Levant’s Orthodox Christians. Locally known as the “Roum” community, the Greek Orthodox of the Levant are a wealthy and influential minority. Russia has vowed to help rebuild churches and has met with the local patriarch. And although mum on Turkish president Recep Tayyip Erdogan’s much-criticized conversion of the original Hagia Sophia into a mosque, Putin has offered to build a replica of the church in the province of Hama—home to an Orthodox population and one of the first cities retaken by the Syrian regime.

It is only recently that the Greek and Cypriot governments have begun doing some outreach to the Roum community in hopes of drawing them back from Russia’s orbit toward the Ecumenical Patriarchate. Greece and Cyprus also reopened their embassies in Damascus and have sent representatives to the Orthodox communities in Syria and Lebanon.

Pushing back against Russia’s multipronged assault on the Ecumenical Patriarchate, which includes Putin and Erdogan’s coordinated pressure on an institution they see as posing a threat to their respective illiberal projects, requires devising and implementing a concerted transatlantic strategy. A good start for the United States and European Union would entail imposing sanctions against authoritarian regimes that violate religious freedoms and minority rights.

The State Department’s designation of Russia as a Country of Particular Concern on November 17 for having engaged in or tolerated “systematic, ongoing, and egregious violations of religious freedom” was a move in the right direction. However, Foggy Bottom sent the wrong message by ignoring the U.S. Commission on International Religious Freedom’s (USCIRF) recent recommendationto designate Syria as a Country of Particular Concern and place Turkey on its Special Watch List.

An effective pushback against Russia also requires calling out the Kremlin’s partners in crime. If the Biden administration would like to avoid promoting a culture of impunity for autocratic regimes, it should heed USCIRF’s call and correct its course next year.

Aykan Erdemir is senior director of the Turkey program at the Foundation for Defense of Democracies and a former member of the Turkish parliament. Follow him on Twitter: @aykan_erdemir

Paul Gadalla is an independent analyst and researcher, writing on a wide range of socioeconomic and security issues. He was previously a Beirut-based journalist. Follow him on Twitter: @BoulosinDC. The views expressed in this piece are his own.