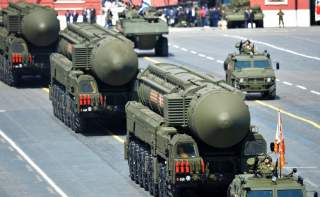 THE NEXT American president will face the most serious challenge from Russia since the end of the Cold War or, for that matter, since the early 1980s, when the United States and Yuri Andropov’s Soviet Union actively confronted one another around the globe. Russia today is increasingly an angry, nationalist, elective monarchy, and while it is still open for business with America and its allies, its leaders often assume the worst about Western intentions and view the United States as the “main enemy”—indeed, a new poll finds that 72 percent of Russians consider the United States the country most hostile to Russia. Worse, Moscow has been prepared to put its money where its mouth is in proceeding with a massive military modernization. The Russian government is simultaneously tightening domestic political and police controls and seeking new alliances to balance pressures from the United States and its allies and partners.

It is important not to oversimplify this situation. It is not a reenactment of the Cold War; history rarely repeats itself so precisely. Vladimir Putin’s Russia is not a superpower and its top officials are realistic about their country’s military, geopolitical and economic limitations. Russia does not have a universal ideology predicated on the West as an enemy. In fact, Putin and his associates regularly profess interest in resuming cooperation with the United States and its allies—on terms acceptable to the Kremlin. The Russian government is eager to obtain foreign investment and access to Western technology, which requires normalcy in relations with the West.

We cannot be sure how Putin and his associates would respond if the United States and its allies were prepared to reshape their policy towards Russia by defining their interests more narrowly, being less categorical about Russian domestic practices, putting a premium on avoiding confrontation and, when possible, even engaging in cooperation with Russia. All that can be said at this point is that Russia’s trajectory is alarming, but probably not yet irreversible.

ONE REASON for avoiding a sense of inevitable confrontation with Russia is that Moscow’s truculence is primarily a function of what America does rather than who it is. To the extent that Russia has an ideology, it is an assertive nationalism that allows cooperation with any nation that does not challenge Russian geopolitical interests or its system of government. Russia thus maintains good relations with authoritarian countries like China and Qatar, and with democracies like India and Israel. In part because its leaders are pragmatic rather than messianic, Russia’s authoritarianism is still relatively soft and incorporates many democratic procedures including meaningful if not entirely free or fair elections, a judicial branch that is autonomous most of the time and a semi-independent media. Transitions to democracy in other countries are only a problem for Russia’s live-and-let-live foreign policy when the Kremlin sees them as either destabilizing (as in some cases in the Middle East) or anti-Russian (as in some cases in its immediate neighborhood).

While a U.S.-Russian conflict is not inevitable, Russia’s estrangement from the West after the Cold War probably stemmed from the unrealistic and contrasting expectations held on both sides. When Mikhail Gorbachev and his liberal allies like Foreign Minister Eduard Shevardnadze, Central Committee Secretary Alexander Yakovlev, and foreign-policy aide Anatoly Chernyaev began articulating and implementing Gorbachev’s “new thinking,” which emphasized universal human values at the expense of national interests, they assumed that the Soviet Union could cease being a global superpower, give up its system of alliances, rely increasingly on foreign economic assistance and still benefit from others’ deference to Moscow as a key player in world affairs. If Soviet leaders had consulted Russia’s own history, they would have realized how profoundly unrealistic their expectations were.

Sergei Witte, who became Russia’s first constitutionally appointed prime minister under Czar Nicholas II following the country’s humiliating defeat in the Russo-Japanese War, would have immediately foreseen what was to come. “It was not because of our culture or our bureaucratic church or our wealth and welfare that the world respected us,” Witte wrote.

[The world] respected our strengths, and when they saw to an exaggerated degree that we were not as strong as they thought, that Russia was "a colossus on clay legs," then the picture changed immediately, domestic and foreign enemies raised their heads, and the indifferent stopped paying attention to us.

Of course, the Soviet Union did not suffer a military defeat in the 1980s like the Russian Empire’s loss in 1905. Nor did the changes in Russian government, policy and philosophy follow a domestic rebellion; instead, they were imposed from the top by a leadership that decided it was on the wrong side of history. Notwithstanding the motives of Gorbachev and, later, President Boris Yeltsin, Western officials showed little gratitude for their roles in destroying the Soviet empire once it became clear that a Russia collapsing upon itself was unwilling to use force and had very little remaining economic leverage. Similarly, while most Russians not only counted on massive Western assistance but even thought of themselves as Western allies in destroying the USSR, most in the West, particularly in central Europe, determined that the time had finally come to act on historical grievances against Moscow or felt that a weak, corrupt and unstable Russia did not deserve to be taken seriously, much less accepted as an equal partner with the United States and the European Union.

The clash of expectations could not have been more consequential. Russia’s experiment with democracy went sour almost from the beginning, when the Clinton administration pressed Boris Yeltsin to accelerate radical and painful economic reforms. Masterminded by young, pro-Western economists who had neither experience operating within a democratic system nor compassion for ordinary citizens, these dramatic changes required authoritarian means precisely because they impoverished the vast majority of Russia’s population. The Clinton administration and other Western governments consistently told Yeltsin he had no choice but to stick with free-market reforms.

Neither Yeltsin’s de facto coup d’état in 1993, which culminated in tanks shelling a Russian parliament elected under the same perestroika-era system that brought Yeltsin to power, nor the demonstrably fraudulent 1996 presidential elections diminished the Clinton team’s enthusiasm for nation building in Russia. As a power-hungry former Communist Party secretary, Yeltsin didn’t need much encouragement to continue on a course that consolidated and expanded his authority inside Russia. Nevertheless, he got all the encouragement and support he needed for an unholy bargain under which the Clinton administration willingly turned a blind eye to his transgressions at home while Yeltsin himself ensured that Russia would defer to U.S. foreign-policy preferences. Yeltsin increasingly relied on media manipulation, new constraints on the legislative branch through a revised constitution and growing power for domestic security agencies. When an ailing Yeltsin appointed a little-known former KGB officer and newly minted director of the Federal Security Service named Vladimir Putin as Russia’s prime minister, the more vigorous de facto successor had all the tools he needed to rule much more firmly.

When it became clear in early 1996 that Boris Yeltsin was extremely unpopular and had little chance of reelection, a coalition immediately emerged to prevent Communist leader Gennady Zyuganov from coming to power. It included new tycoons who benefited from Yeltsin’s corrupt privatization, the security services (whose authority and prestige Yeltsin restored) and the bulk of the media, much of which was owned and operated by Russia’s oligarchs expressly as an instrument of political influence. Russia’s media portrayed the unreformed Communists as a mortal threat to democracy that only Yeltsin’s reelection could avoid, ignoring the fact that Yeltsin’s opponents also included a democratic candidate: Grigory Yavlinsky from the generally pro-Western Yabloko Party. With financial and media support, and a helping hand from Washington (which was managing IMF disbursements to aid Yeltsin), Yavlinsky could have had a chance. Yet the market-oriented democrat Yavlinsky opposed radical reforms because of their devastating impact on the Russian people. He also opposed the corrupt tycoons and criticized U.S. interference in Russian domestic affairs and NATO’s intervention in the Balkans. Yeltsin was reelected with massive electoral fraud after suffering a heart attack hidden from voters that left him unable to perform his duties. Western support for ill-conceived and damaging economic reforms and Western disregard for Russian democratic procedures helped the West lose its moral authority in Russia.

More fundamentally, Russia was unprepared for democracy. Russia had not managed to build organized democratic parties with mass support among the population. In Russia’s history and culture, a strong czar was viewed as a protector against abusive boyars—wealthy nobles who would otherwise exploit ordinary people. Many Russians saw delegating this authority to the voters as a deceitful cop-out that would benefit the rich and powerful and their backers in the United States and Europe. After their experience with Communist ideology it was natural for many people, particularly intellectuals, to view liberal democracy as the answer. Once confronted with the reality of how democracy was working in Russia, their interest in foreign ideas declined dramatically.

THE DARING combination of NATO expansion and growing interventionism further accentuated Russia’s alienation from the West. Remarkably, NATO failed to consider how its dramatically different conduct would affect relations with Russia or world politics in general. With post–Cold War triumphalism increasingly seeping into conventional wisdom, most assumed that when the United States and major European powers wanted to do something in the international arena, they could impose their will without significant costs. Though this new NATO assertiveness was not deliberately directed against Russia, few within the alliance took seriously Moscow’s concerns—which were met by most with either indifference or contemptuous disregard. Rarely if ever did U.S. leaders critically assess how they themselves would react if a powerful (and not even necessarily hostile) alliance sought to add Canada and Mexico to its ranks while excluding the United States.