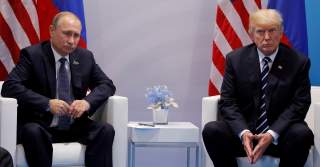 The arrival of Russia's new ambassador to the United States, former deputy minister of defense Anatoly Antonov, happened to coincide with the latest round of the U.S.-Russia sanctions tennis match. Responding to Moscow’s expulsion of U.S. diplomats and closure of U.S. consulates—which the Kremlin claimed was in response to the passage of new sanctions legislation on Russia, which Congress maintains was a necessary response to Russian attempts to influence the U.S. elections, which Russian politicians either deny responsibility for or maintain that the United States has interfered in domestic Russian politics—the U.S. State Department has moved to equalize the number of U.S. and Russian diplomatic personnel and ordered the closure of Russian facilities. The most notable facility in question is Moscow’s traditional listening post to Silicon Valley in San Francisco. Immediately after receiving the U.S. demand, the Russian Foreign Ministry predictably released a statement that promised that after careful study, Moscow would announce its reaction.

While some are predicting that the game of tit-for-tat will continue, with further expulsions of U.S. diplomats on the agenda—which would almost guarantee an American response—one must also examine whether Moscow is prepared to stop the pendulum. Upon his arrival in the United States, when asked about a Russian response, Antonov, citing Vladimir Lenin, maintained that Moscow will “sort this out calmly” and will eschew any “hysterical outbursts.”

Given Antonov's comments prior to embarking for the United States, he may not wish to start his ambassadorship on such a negative note. Instead, Antonov hopes he could turn a fresh leaf in U.S.-Russia relations by advocating for the restoration of military-to-military contacts and by promoting a direct dialogue between the two countries’ national security advisors and their related staff. This direct White House to Kremlin channel would bypass the two foreign affairs bureaucracies. In particular, Russia has a compelling need to get U.S. acquiescence on a Syrian settlement that would leave Bashar al-Assad in charge of most of the country and would not only restore Russia's great power prestige in the Middle East, but, more practically, permit Moscow to begin withdrawing forces to be prepared for other contingencies in the Eurasian space. Despite the one-time launch of U.S. cruise missiles against a Syrian air base in the spring after a chemical weapons attack, the Trump administration has largely disengaged from Syria. Moscow has now been in the driver's seat in coordinating a settlement and drawing in Turkish, Iranian and Arab stakeholders.

In addition, Russia has a very clear interest in stopping the sanctions pendulum from further swings. Moscow wants to prevent giving President Donald Trump any provocation or justification to use the authorities granted to him by Congress to impose third country sanctions on companies that take part in critical Russian energy projects, especially the construction of the two pipelines (Turkish Stream and the Nord Stream 2 expansion) meant to end Russian dependence on Ukraine as a transit country for Russian natural gas sent to European markets. Those provisions, which in the initial Congressional bill would have been automatically applied, were weakened in the final version signed into law by Trump to leave them at the discretion of the president. Moscow has seen that the Trump administration is prepared to escalate—and this is a direction the Russian side would prefer the United States not go down.

But the ball is in the Kremlin’s court. Ultimately, Russian president Vladimir Putin has to decide whether pride requires a Russian response, or whether he is willing to accept the current state of play and stop the cycle altogether. Antonov’s own comments suggest that he is willing to recommend a pause and to see if further deterioration can be prevented. But if not, then he will have an even less productive and enjoyable tenure as ambassador than his predecessor Sergei Kislyak.