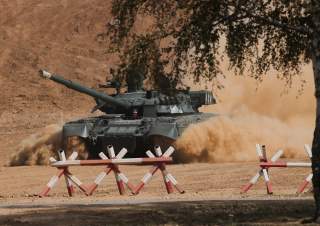 Again, to remind, Russia—in part due to its own imperial and Soviet expansion—has throughout its millennia of history been at war along its borders with massive loss of life. She barely survived several bouts of near annihilation including the Mongols from which some Russians organically still retain a visceral phobia of the East. Bookending this medieval horror, within the lifetime of today’s older grandparents, came the merciless Nazis from the West, from whom a staggering twenty million to twenty-six million Soviets perished. These factors clearly play in how the Russian people view external threats and how the regime leverages these perceptions to help mobilize the population. They should not, however, be used, or accepted as a pretext for aggressive revisionist actions.

Challenges regarding its smaller population and sanctions hobbled finances mean that Russia is hard-pressed to field in peace-time a one-million active duty military force. Additionally, over 30 percent of its personnel consist of difficult to manage one-year conscripts. This main force competes with robust security services and an approximately 250,000-strong National Guard. While a considerable force, Russia’s vastness, and widespread military commitments in places like Syria, Eastern Ukraine, Transnistria, Armenia, Tajikistan and Kyrgyzstan rapidly diffuse it’s standing force, requiring major mobilization and training exercises such as this year’s Vostok-18 that will entail rapid shunting of forces across Russia’s colossal Eurasian landmass. This is a major reason Russia regularly drills as it does for potential war in a nationwide effort and why so much emphasis is put on territorial mobilization and defense.

All these factors reveal why it was absolute prudent, transactional foreign policy for China and Russia to resolve the border disputes that plagued their relations. While vulnerable to potential future problems including an increasing resource imbalance especially with oil and natural gas, both nations have bigger fish to fry, whether Russia’s issues to the west and south, and in China’s case, in the southeast Pacific, and with India to a lesser extent. Both needed calm borders and a more insulated trading relationship such as their massive $400 billion natural gas deal signed in 2014. Making increased military interaction more attractive is also the shared perception that the United States and its allies are squarely blocking their more autocratic aspirations and directly threatening their regimes. Neither have major allies or are part of a well-organized security alliance as is NATO. They are loath about being internationally isolated or contained, which explains why both, even while pursuing different agenda, are usually lockstep with each other on major security issues in the UN and other international fora.

Therefore, U.S. and allied policy regarding both Russia and China should continue to be strong and predictable focused on the specific issues that both challenge and benefit relations. Allies must be firmly defended and partners supported. Legal international boundaries and protocols must be respected and if need be enforced. What we should not do, however, is default toward treating both nuclear-tipped Russia and China as a conjoined threat thereby creating a future potential “self-fulfilling prophecy” where they could—especially if they perceive being isolated—temporally ally in some type of powerful, transactional pact. We should watch and learn from these military exercises, assure allies and partners, but not overreact to their actions and rhetoric nor appear to try to drive a wedge between them. The wedges are already there, those of the vast regions history, geography demography and resources which will inevitably play out in the generations ahead.

Brig. Gen. (retired) Peter Zwack writes from the Institute for National Security Studies within the National Defense University. He served as the United States Senior Defense Official and Attaché to Russia during contentious 2012-2014. Dating back to 1997, 2000 and 2012 he has traveled extensively throughout Eastern Siberia and the Russian Far East. These are his personal views and perspectives.