Russia and China’s War on the Dollar Is Just Beginning 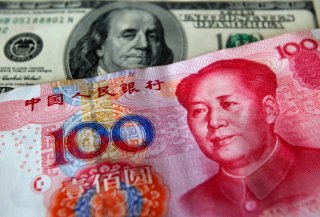 One infallible trend that has persisted throughout history is the correlation between financial and geopolitical power. For a country to build up its military, pursue innovative technologies, and maintain a productive workforce, it must have a robust economic base. While admirals and advisers are increasingly highlighting the closing gap between Chinese and American military capabilities, the U.S. dollar remains dominant. Is this a fact that can be taken for granted, or does a Sino-Russian alliance pose a tangible threat to Washington’s financial hegemony?

The speed and scope of China’s rise has been the subject of fierce debate for many decades, but recent statements by U.S. officials have made it clear that the United States no longer enjoys the unparalleled geopolitical preeminence of the post-World War II years.

If the United States was experiencing such dramatic military and technological setbacks compared to China, one would expect these trends to be reflected in the relative influence of each country’s currency. However, this has largely not been the case. The world economy still relies on financial institutions managed by the United States, and there is little indication that this will change anytime soon.

The share of foreign exchange transactions using the U.S. dollar remained stable for the two decades leading up to the 2020 pandemic-induced recession, hitting 88 percent in 2019. As countries turned inward and supply chains were disrupted during the global health crisis, U.S. budget deficits increased, making the dollar a less attractive currency worldwide. As a result, for the first time since 1997, the dollar's share of the world's currency reserves fell below 60 percent in 2020. While this seemed to presage the beginning of the end for American financial hegemony, the dollar has made a comeback driven by consumer spending and business investment, despite alarmingly high levels of inflation. Meanwhile, countries across the world continue to struggle with the economic impacts of the pandemic, as well as food shortages exacerbated by the war in Ukraine. As a result, when placed against other currency options, the value of the greenback has reached its highest level since 2002.

A large part of this success can be attributed to the U.S. dollar’s role as the world’s reserve currency. Countries continue to pay for their goods, commodities, assets, and debt obligations in dollars, requiring central banks across the globe to hold significant quantities of the greenback in their reserves. In the fourth quarter of 2019, $6.7 trillion was dispersed in the world’s central banks, providing Washington with a unique degree of bargaining power and influence abroad from the decisions that the U.S. Treasury makes domestically.

Preserving this privileged position comes with considerable advantages that will prove crucial during a great power struggle. The United States can borrow at lower rates than any other country, is always certain that other central banks will buy its bonds, and can direct transactions through American-led institutions. Although  China has become more militarily and economically powerful, the yuan was only used in 2.7 percent of international payments in 2021, falling far behind 40.51 percent for the dollar and 36.65 percent for the euro.

Nonetheless, in the wake of Russia’s invasion of Ukraine, the tide seems to be turning—perhaps not permanently, but in a way that should concern American policymakers. The Sino-Russian alliance is attempting to attract other nations to an alluring alternative, with the ultimate aim of constructing a financial system wholly independent from Washington’s control. With Russia’s help, China is gradually seeking to undermine U.S. financial hegemony.

After Western countries united to sanction Russia following its war on Ukraine, one of Putin’s first responses was to force European countries dependent on Russian energy imports to pay in rubles or gold. Out of sheer necessity, many energy companies have accepted his mandate, forcing their euro payments to be converted to rubles before being stored in a separate account under their ownership. This entails a number of consequences.

Since the ruble’s price level has historically been strongly correlated with energy prices due to the importance of exports in Russia’s economy, the scarcity of oil and gas in global markets has led the ruble’s value to swell in a self-reinforcing cycle. The ruble, to the surprise of many Western analysts, has become one of the most successful currencies in the world as the Russian central bank does everything it can to stymie the flow of dollars and euros. Through capital controls and regulations requiring Russian investors to convert their surplus revenues into rubles, the value of the currency has rebounded and even exceeded its pre-war levels.

Moreover, the burden that the West will have to shoulder in accepting Putin’s system will become increasingly painful. If the ruble continues to appreciate over the next few months, Western countries will have to spend more to convert their currencies to rubles to pay for their indispensable energy imports. Not only does this raise the global demand for rubles, but it also demonstrates to other governments that the Russian currency is capable of resisting punishment from major Western countries.

Alongside these payments, Russia is working to build an alternative to the Society for Worldwide Interbank Financial Telecommunication (SWIFT). In 2014, the same year Russia annexed Crimea, the Kremlin established the System for Transfer of Financial Messages (SPFS), a ruble-based payment system that would act as an alternative to SWIFT. China followed suit one year later, rolling out the Cross-Border Interbank Payment System (CIPS).

Alone, each initiative is unlikely to undermine SWIFT’s global reach. The SPFS was certainly not able to prevent Russian citizens from withdrawing over one trillion rubles shortly after the announcement of the SWIFT sanctions in March. However, the Putin-Xi summit preceding the invasion and China’s refusal to explicitly condemn the Kremlin have underscored the degree of cooperation that these two authoritarian powers are prepared to undertake to challenge the West. For them to have any impact, one of their first targets will be the economic sphere, as it is a prerequisite to geopolitical influence.

Indeed, China and Russia have already discussed fusing their respective financial systems, with Moscow assuring Beijing that it is ready to use yuan in its foreign reserves to expedite the process. Paired with Russia’s elaborate transfer scheme for oil and gas payments, which will continue to function as long as European countries reason that they cannot cut their dependence on Moscow without suffering unacceptable financial setbacks, it becomes clear that authoritarian powers are aiming to subvert the global hegemony of the U.S. dollar.

China is ostensibly the greatest cause for concern, as it has effectively pursued the development of a digital yuan. An electronic currency detached from American financial oversight will facilitate the unfettered expansion of China’s Belt and Road Initiative because Washington will be unable to track the transactions made between Beijing and developing countries. To finance infrastructure projects in Latin America, Africa, or the Middle East, China will force foreign countries to make payments through an untraceable, hyper-centralized currency. The United States does not have this advantage with the dollar because, as the world’s reserve currency printed in a transparent and democratic country, information regarding its value and circulation is more easily accessible.

Finally, even without considering its digital form, the yuan is already threatening to replace the dollar in key markets that may have a tremendous impact on U.S. security. Frustrated by the Biden administration’s approach to bilateral relations, as well as other regional issues, Saudi Arabia is in talks with China to accept oil payments in yuan. Iran has been accepting yuan payments for its oil sales to China for the past decade due to U.S. sanctions. The yuan’s comparative stability might make it more favorable for commercial purposes and as a reserve currency. While American consumers and businesses have weathered the effects of an inflationary economy, less developed countries with dollars in their central bank reserves may not make it out of the current recession. These central banks could turn to the yuan as a substitute.

This is not to say that the dollar is in an ineluctable decline. Putin has expressed doubt about completely removing the greenback from Russia’s central bank. As of July 2021, China still held 50 to 60 percent of its foreign exchange reserves in dollar-denominated assets. Although Beijing is undoubtedly strengthening its military capabilities, it still has a ways to go before entirely subverting the dollar.

European countries that once dealt amicably with China have been antagonized as a result of the Xi-Putin summit and the country’s silence regarding the humanitarian crisis in Ukraine. This will hurt Chinese exports and prevent Beijing from trapping more governments in its economic web. In addition, the Belt and Road Initiative may not necessarily translate to an unquestionable success. If the United States is able to leverage its entrenched financial institutions, such as the Inter-American Development Bank, to create more capital in Latin America, for instance, China may struggle to offer a more attractive alternative.