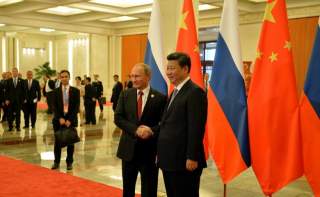 As Russia’s unexpected military intervention in Syria has dominated headlines across the globe in recent weeks, more than a few media outlets have speculated on whether Chinese forces could enter the fray.  While that particular “twist” on the story remains extremely unlikely, the question is not entirely outlandish.  After all, it was only a few months ago that a Chinese naval squadron was in the Black Sea exercising with the Russian fleet. Moreover, the Chinese Navy’s profile has been steadily rising in the Middle East as it sent its first flotilla into the Persian Gulf in the fall of 2014, has also conducted competent evacuation operations in Yemen in 2014 and Libya in 2011, while the PLA Navy maintains its continuous anti-piracy patrols in the Gulf of Aden as well. Major foreign and defense policy dilemmas await Beijing as it continues to plot out the future of its “one road, one belt” – China’s own strategic “pivot” to the west.

Nevertheless, Russian President Vladimir Putin’s continued success at keeping the West off balance with his Syrian gambit also raises the urgency of understanding the trajectory of the China-Russia relationship. For years, Western analysts have suggested that the Moscow-Beijing tie could not amount to much because it is widely regarded as purely a relationship of convenience suffused with mutual suspicion. Over the last decade, moreover, this skepticism has seemed to prove itself repeatedly, for example in the various bilateral energy projects that have moved slowly at best or in the somewhat indolent policy initiatives of the jointly managed Shanghai Cooperation Organization (SCO). But Western strategists are, nevertheless, right to watch this relationship closely since a major strengthening of Russia-China relations could develop into the Eurasian “colossus” (albeit with two capitals rather than one) that geopolitics gurus have long warned about.

Signs of a steadily enhancing Russia-China partnership  are quite readily visible.  Reciprocal visits by the two Presidents to observe one another’s victory celebrations (and the conspicuous lack of Western leaders at either event) seemed to demonstrate a shared contemporary isolation as well as the common history of suffering catastrophic losses in the enormous conflagration of the Second World War. A recent article in the prestigious Chinese military journal, 中国军事科学 [China Military Science] highlights that shared history in exploring “China-Soviet Union Cooperation during the World Anti-Fascist War.” In a chapter of WWII that is rarely discussed in the West, this article explains that Moscow did impressively provide China with almost 1,000 aircraft (and accompanying volunteer pilots) in the four years after the Nanjing Massacre in December 1937. There are numerous reasons why such extraordinary aid is not widely discussed. For Moscow, this lavish aid may appear as a significant strategic miscalculation in the years before the Nazi onslaught when the Red Army could no doubt have used those same aircraft as a vital reserve force.  But in China, Soviet aid during WWII was not discussed thoroughly for many decades, because much of the aid flowed to the Nationalist Chinese rather than the Communists, and more particularly because of the legacy of the Soviet threat dating from the 1960s made such historical revelations a violation of prevailing Maoist, anti-Soviet orthodoxy.

While that history is indeed interesting and relevant, the focus of this edition of Dragon Eye is instead on the contemporary China-Russia relationship. For that “strategic triangle” made famous by Henry Kissinger’s diplomatic pirouettes of the early 1970s, a fascinating view is offered in a mid-2015 edition of 俄罗斯东欧中亚研究 [Research on Russia, Eastern Europe and Central Asia], published by the China Academy of Social Sciences. That journal has an interesting survey of Western writings on the evolving China-Russia relationship. Such literature reviews are quite common in Chinese social science journals, and this one is admirably complete, citing as it does, some notably solid analyses published in this venerable forum on the subject of the China-Russia relationship. But this Chinese literature review suggests that most Western analyses are surficial in nature and also are rather pessimistic, “… 唱衰中俄关系 …” […crooning about the decline of China-Russia relations …].

The survey develops an interesting time-line for the development of the Russia-China relationship in the post-Cold War world, starting with Moscow’s clear statement back during the 1995-96 Taiwan Crisis that its “one China policy” would not change. While the wars in the Balkans did push Russia and China closer together, this Chinese analysis relates that Russia-China relations “confronted the challenge of the 9/11 events,” because Russia appeared, for a time at least, to lean strongly toward the U.S. Interestingly, it is noted that Beijing did not explicitly support Moscow during the 2008 war with Georgia. This analysis also observes a seeming inclination of then-President Dmitry Medvedev to “亲美疏中” [kiss the U.S., while neglecting China].  According to this analysis, however, the tightening of the Moscow-Beijing link was well under way prior to the Ukraine Crisis. In particular, the author cites the West’s 2011 intervention in Libya as a major turning point. Nor did either the Bear or the Dragon appreciate reverberations of the “Arab Spring” into their own respective regions.  Indeed, their common perception was that the West was ever more eager to see regime change in both Russia and China. An imperative to halt these trends was suggested in Sino-Russian diplomatic coordination in mid-2012 to prevent UN sanctions against the Assad regime in Damascus. Additional evidence, of course, is that Putin’s first trip abroad after assuming the Russian Presidency again in 2012 was China, while the opposite journey was made as Xi’s inaugural journey abroad as Chinese President back in 2013. Nevertheless, there is little doubt that the Ukraine Crisis has also helped to usher in a “new normal” in Russia-China relations.  This Chinese analysis demonstrates a keen awareness that Western analysts are now seriously concerned lest the relationship evolves into a full-up “军事政治联盟” [military-political alliance].

The Chinese survey dutifully records much skepticism in Western appraisals regarding the possibility of genuine Russia-China strategic coordination. For example, one well-known Western academic is quoted as suggesting that Russia-China relations “are full of weakness.” It is recorded that other Western analysts emphasize both the limitations of the partnership, and also its “asymmetric” nature.  On the latter point, it is suggested that there is a growing “实力差距” [capabilities gap] between the two powers and there is also a perception in the West that within the bilateral relationship that Beijing is increasingly in the driver’s seat. Indeed, one reason such literature surveys are popular among Chinese specialists is they may allow Chinese specialists to actually articulate concerns that are not quite politically correct in either Beijing (or Moscow for that matter). There is some discussion of the legacy of hostility and mistrust that may still linger from the armed confrontation that occurred on the border back in the middle of the Cold War. Interestingly, the analysis observes that this mistrust may “加上文化上俄罗斯一直对西方的认同感” [reinforce the degree to which Russia always identifies with the West on a cultural level].  To give a relatively concrete example of the related difficulties, this study mentions, for example, how Chinese copying of Russian weapons systems has caused Russia to be increasingly wary of exporting armaments technology to China. Meanwhile, it is pointed out that Chinese brace against such arms technology limitations, since it seems Russia is just seeking to maintain its edge in military technology over China. For this and other reasons, the Chinese analysis concludes that Western specialists are generally dismissive of the so-called “专制主义轴心” [authoritarian axis] and view the relationship as a kind of “bargaining chip” for both Moscow and Beijing in their respective relations with the West. The piece concludes with the rather dark view that many Westerners concerned about Russia still view China (vice Russia) as the “真正的战略对手” [the real strategic opponent]. The Chinese author observes, moreover, that the West is always aiming to “use China to pin down Russia and to employ Russia to pin down China …”

Watching Putin’s Syrian strategy unfold, along with all the related Western perturbations, many Chinese diplomats are sure to advocate for that most classic of Chinese stratagem:  “坐山观虎斗” [sit on the mountain and watch the tigers fight].  However, Western analysts may yet be too skeptical regarding the development of Russia-China relations. As suggested above, various periods in history have seen very high levels of China-Russian collaboration, to include – lest we forget  – the very founding of the Chinese Communist Party. It is not at all clear, as is often suggested, that antagonism is the “natural state” of affairs in China-Russia relations.  The dual combination of the “rebalance,” in tandem with the West’s still evolving strategic response to the Ukraine Crisis, may yet prove sufficient to solidify a geopolitically significant Eurasian counterpoise.