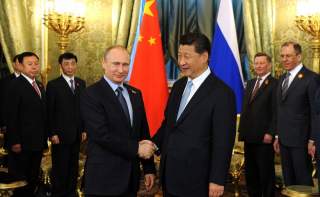 Vladimir Putin has recently made a number of statements about Russia's military posture—from promising to match any U.S. deployment of equipment and personnel in Central-Eastern Europe to pledging major increases in Russia's nuclear force. Should we treat his comments as mere posturing, or be concerned that we are on the verge of returning to Cold War–era conventional and nuclear arms races? And if the latter, isn't that a particularly risky strategy for the Russian government? The Russian economy is in no position to take on a burden of seeking military parity with the United States—an exercise that ultimately helped to bankrupt the Soviet Union, which had a much greater resource base to work from.

For those who look for additional proof that Putin has lost touch with reality, a comment that the Russian Federation, with an economy one-tenth the size of the United States, is really prepared to go toe-to-toe with Washington only confirms that impression. However, Putin’s apparent willingness to match any American deployments to Europe could also reflect his assessment of the deteriorating global strategic position of the United States.

Ever since the close of the Cold War, the United States has steadily chipped away (largely for budgetary reasons) at the strategic proviso that it must be ready to take on two simultaneous major conflicts in different parts of the world. At the same time, efforts to forge different clusters of geographically dispersed allies (Australia, Japan, and South Korea in Asia, NATO in Europe, and Israel and the Gulf monarchies in the Middle East) into an overarching global security partner for Washington have largely failed—as well as attempts to get allies to contribute more to regional security, to allow for a diminishment of the U.S. role.

The 2012 Defense Strategic Guidance, which has continued to shape both U.S. defense spending and anticipated force structure, is based on several critical assumptions. The first is that the situation in the Middle East was stabilizing, allowing for a decade of U.S. overinvestment in the region (in security terms) to end. The second is that there was no longer any major conventional security threat to the Euro-Atlantic region, so that Europe—assuming allied countries were prepared to increase their own defense expenditures—could serve as a global security provider rather than as a regional security consumer. Both of these, in turn, could allow for a U.S. rebalance to the Asia-Pacific region while also providing a basis for cost-cutting savings in expenditures.

For the last two decades, the United States has been lucky—it has been able to concentrate its military might in dealing with one regional operation while other parts of the world remained quiet. During the Gulf and Iraq Wars, for instance, the United States could pull troops and equipment from Europe and Asia without worrying allies or undermining the American strategic position. That is now changing.

While the United States considers deploying assets to Europe to confront a resurgent Russia and to reassure jittery allies, it does so against the backdrop of concerted Chinese efforts to improve its strategic position in the South and East China Seas and a Middle East unsettled both by the rise of ISIS and the ramifications of Iran’s possible ability to preserve its nuclear achievements and end a global sanctions regime. NATO's eastern members want a greater U.S. presence, but at the same time, Middle Eastern allies fret about possible abandonment. Asian partners, meanwhile, are gearing up for yet another series of disappointments, watching the Trans-Pacific Partnership falter in the U.S. Congress and are concerned that Washington does not have the staying power to hold the line. The recent “defection” of so many allies to flock to China’s banner when it created its infrastructure bank for the new Silk Road was dramatic proof that if countries are unsure of Washington’s commitment, they will start to make their own arrangements with Beijing.

In the absence of a new military buildup—and dealing with the reality that as the United States replaces older weapons systems, it is paying more for fewer units—Washington increasingly will have to resort to one of two approaches: the minimal-tripwire approach (stationing a skeleton number of personnel and equipment in the hopes of deterring a potential adversary on a growing number of frontiers around the world) or the strategic triage approach—deciding in what region of the world it is prepared to invest the bulk of its military capacity to shape the regional security environment, and where it will concentrate on holding actions.

During his long tenure in office, Putin has observed two things about the United States. Despite its overwhelming advantages in a global sense, the United States, because of its global responsibilities, cannot always bring them to bear in a given region. Putin has consistently exploited the gap between U.S. rhetoric and the realities of what Washington has been prepared to spend in the Eurasian space—because the United States could not spare the resources—to push back and at times successfully challenge American preferences. The second is that the United States can be distracted. Sending a few aircraft to patrol off of U.S. territory or a pair of ships into the Caribbean has been a relatively low-cost way of irritating the United States and raising concerns about American vulnerabilities in its own neighborhood. Pressure is growing for more U.S. direct action in the Middle East—so whatever short-term buildup the United States makes along the eastern Euro-Atlantic frontier, Putin is gambling it will not be of lasting duration.

Behind Putin, the Chinese cannot be displeased with how the situation is evolving. A greater U.S. focus on Europe and the Middle East guts the rebalance to Asia and helps Beijing with its consistent narrative of a distracted Washington unable to make commitments. Concerns about America’s focus and staying power also help to explain why Prime Minister Shinzo Abe of Japan has been one of the weakest links in the G-7 when it comes to pressuring Russia—because Japan feels it must not foreclose its options, given worries about how easily the United States gets sucked back into European affairs again and again, despite years of promises that Asia would assume the front and center focus in U.S. strategy.

The United States can continue to make cuts in the growth in defense spending. It can continue with its rebalance to Asia. It can reverse its withdrawals of personnel and equipment in Europe and the Middle East. It cannot do all of this. While the United States continues to debate its options, do not be surprised if Putin, Xi Jinping and others do not fail to take advantage of the situation.