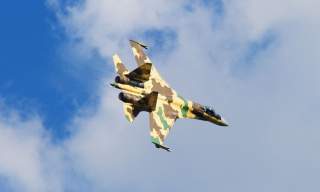 What Robert Kaplan so smartly dubbed “Asia’s Cauldron”— the South China Sea— might be set to boil once again. But the real kicker is who might be turning the switch to “high” on that virtual stove: none other than Russian President Vladimir Putin.

Events thousands of miles away in Ukraine could set off a chain reaction that could see China become the undisputed ruler of this large body of water thanks to a large infusion of Russian weapons and technology— if the West starts arming Ukraine.

But before we get to all the juicy details of how China could become “master and commander” of the South China Sea thanks to Russian assistance, lets take a much needed survey of the latest drama show in this troubled body of water. Tensions are rising in the Asia-Pacific as China continues to change facts on the ground (“in the water” might be a better term), continuing work on several massive island reclamation projects that many analysts feel will create much larger islands housing airfields, ports, radar stations and maybe even anti-ship missile batteries. The motivation is quite obvious— Beijing would likely become the sovereign master of the South China Sea if these islands were used for the natural purpose of claiming sovereignty. Nothing says “indisputable sovereignty” by doing the things a sovereign does, like patrolling your supposed territory and enforcing your laws in that territory. Bases in the South China Sea could make that all too infamous nine or ten-dash line more than just big marks on a map somewhere in Beijing. They could make it a reality.

When it comes to Chinese military capabilities, much has been made over the last several years of the PRC’s growing ability to deny a technological advanced adversary (think the United States and/or Japan) the capability to intervene in various possible engagements near its borders (Taiwan and/or the East and South China Seas). Over the next several years, such capabilities are likely to evolve and improve thanks to technological innovations. Combining likely Chinese technological advances like longer range and more accurate cruise missiles, plus new bases in reclaimed islands in the South China Sea, is nothing short of a nightmare for U.S. and allied planners who are doing all they can to ensure access to vital parts of the Asia-Pacific.

Dubbed A2/AD by most Western military specialists, the PRC is slowly creating the conditions in which U.S., Japanese or other allied forces would suffer heavy losses if a conflict ever occurred in the out to the first island chain, and in the future, all the way to the second island chain. Across multiple domains of possible engagement (land, sea, air, cyber and space), Chinese forces have pursued a robust program to develop a set of unique weapon systems that take advantage of specific weaknesses in perceived U.S. and allied capabilities. While such capabilities are already robust enough that Washington and its allies are making plans to negate the impact of such a strategy (see the Air-Sea Battle/JAM-GCC concept debate), something widely missed in many open-source reviews of the problem is that Beijing is already at work on acquiring the next generation of A2/AD weapon platforms, along with developing matching tactics and strategies.

China, over the last several years, has developed 5th-generation fighter prototypes, increasingly sophisticated anti-ship ballistic missiles and longer-range land and sea attack cruise-missile platforms. Such systems are not easy to produce for any nation. If Beijing were to find a willing partner, one who might already have such technology, it could provide the quantum leap needed to field such highly advanced A2/AD weapons platforms years ahead of when domestic producers could do so on their own. Russia, looking for revenge over the crisis in Ukraine, could provide such assistance.

How Russia Could Help China: Weapons and Technology

Imagine this scenario: The West decides that it is time to arm Ukraine. Russia decides it needs to strike back— and not just in Europe. President Putin pulls out his map of the globe and looks for a place where Russian power would best stick it to the United States. His eyes light up on the one area that could not only strengthen ties with a potential partner but do real damage to America’s efforts to “pivot” to that part of the world: the South China Sea.

A2/AD Heads to the Sky: Here Comes the Russian SU-35

China is attempting to enhance its anti-access capabilities in the air domain with the much-rumored purchase of the SU-35 from Russia, a purchase that could become formalized if the West arms Ukraine.

With greater range than the current PLAAF SU-27/J-11, the SU-35 would give China the ability to deploy advanced fighter jets for longer periods of time in the East and South China Seas, improve the effectiveness of patrols in the recently declared East China Sea Air Defense Identification Zone (ADIZ) and possibly help Beijing create an ADIZ in the South China Sea. The aircraft would likely be superior to most fighters in Asia (except the F-22 or later F-35) and fill the gap until presumably domestic 5th-generation stealth airframes come online. If China armed the plane with advanced anti-ship weapons and based them in newly created airfields on Johnson or Fiery Reef, a new and potent anti-access weapon would emerge, with solid capabilities to push allied forces back to safer waters.

On the high seas, and thanks again to possible collaboration with Russia, China could seek to enhance its capabilities under the waves with possible new submarine purchases. This has been tied to press reports surrounding a possible SU-35 sale over the last several years. While reports do vary on the seriousness of negotiations and have been confirmed and denied several times, we again get a sense of Chinese trends in attempts to strengthen its A2/AD capabilities with Russian help.

A fresh infusion of new sub technology would be of vital importance to China not only for the ability to deploy undersea vessels with greater capabilities, but also because Beijing could potentially reverse engineer new technologies from these subs. This would likely include Russian AIP engines, better quieting technologies and state of the art anti-ship weapons sometimes sold with each sub.

The PRC also seems interested in improving its anti-submarine warfare (ASW) technology--a traditional weakness for Beijing. In an article for Proceedings magazine last year, TNI contributor Lyle Goldstein and Shannon Knight explore recent Chinese works that suggest Beijing “has deployed fixed ocean-floor acoustic arrays off its coasts, presumably with the intent to monitor foreign submarine activities in the near seas.” Citing multiple essays in Chinese sourced materials, their research seems to all but confirm Beijing’s foray into this important area of military technology.

While there has been no specific mention of a submarine deal between Russia and China, Moscow certainly has the experience to help Beijing in this regard. Considering that U.S. efforts to keep access to possibly contested spaces by Chinese A2/AD is largely dependent on U.S. submarines staying stealth, such a collaboration in this area could bolster Chinese A2/AD plans considerably.

Why Russia Might Want to Think Twice: The SU-27 Deal

While the Ukraine crisis certainly would be a powerful catalyst for Sino-Russo defense technology collaboration, such transfers have happened in the past— with Moscow paying a heavy price. Russia would certainly be wise to review the recent past, which offers clues on why a sale to China could be challenging over the long-term.

The last major aircraft deal between Moscow and Beijing in the 1990s involved the still much sought after 4th generation SU-27 Flanker. At the time, Russia hadn't sold technologically advanced military hardware to Beijing since the Sino-Soviet split, when a rise in tensions sparked border clashes. When the USSR collapsed at the end of 1991, the Russian arms industry was struggling to stay above water. Russia was overflowing with weaponry that could help the Chinese jump multiple generations in military technology, so a partnership appeared to make sense.

For China, gaining access to state-of-the art military technology was critical and by 1991 Beijing considered such a quest of top importance. Chinese strategists were stunned at the speed at which the United States was able to overwhelm Iraqi armed forces in the First Gulf War. Chinese military planners realized that much of their weaponry was obsolete in the face of precision-guided munitions, stealth bombers and fighter aircraft all guided by advanced command and control systems. Russian technology— while not as advanced as America's— provided a much-needed boost toward modernization.

In 1991, Moscow sold Beijing a batch of twenty-four SU-27’s for approximately $1 billion. In 1995, China purchased another twenty-four Su-27s from Russia, which were delivered in 1996. In the same year, China and Russia deepened their partnership when Beijing paid about $2.5 billion for a license to manufacture an additional 200 or so SU-27s at the Shenyang Aircraft Company. The contract had an important provision— the Chinese version of the SU-27, which included imported Russian avionics, radar and engines, couldn't be exported. Russia was concerned China would reverse engineer or learn enough about the SU-27 that they could some day sell it to third parties, costing Russia potentially billions of dollars in fighter jet sales.